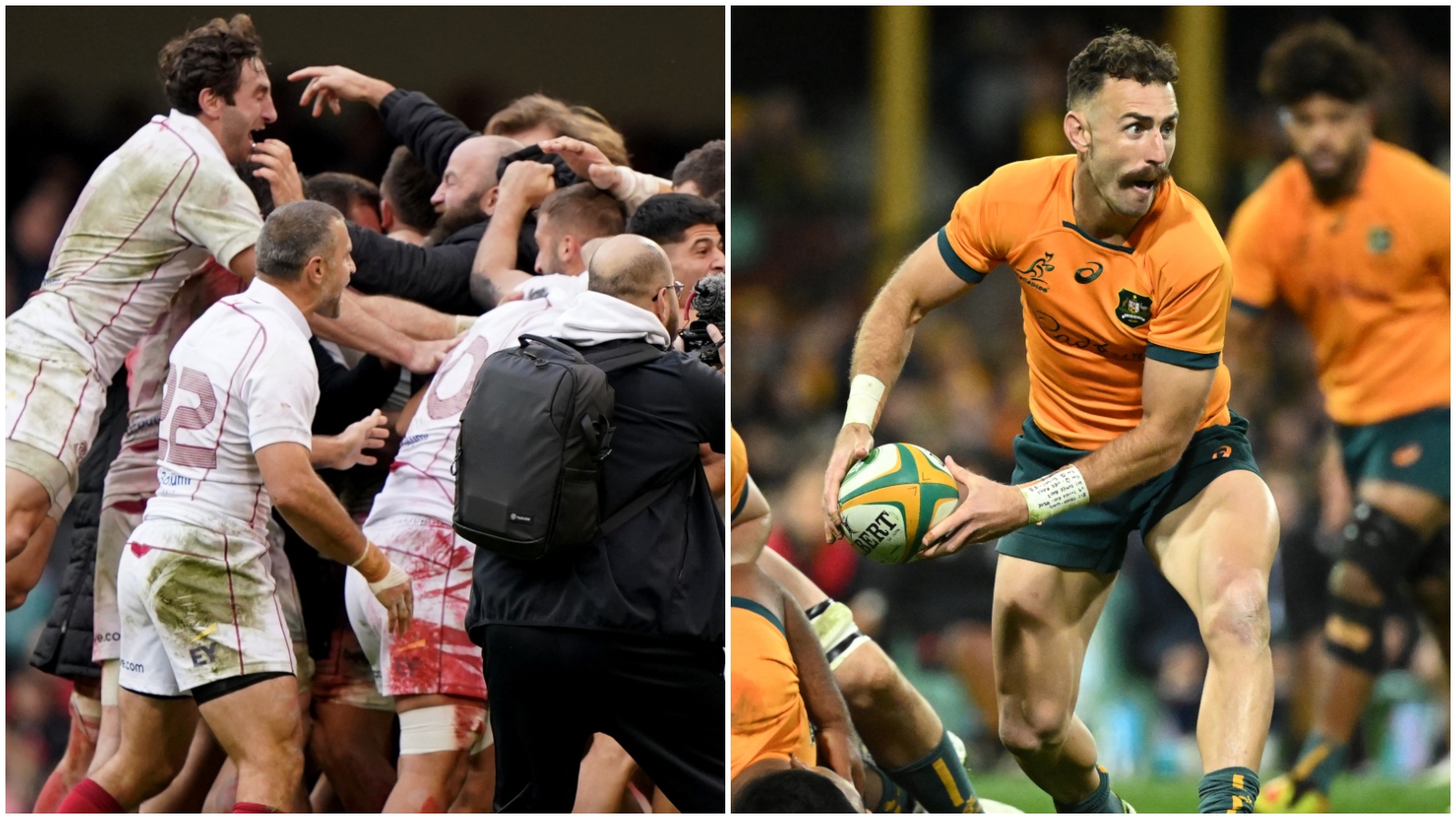 It’s time for our Monday wrap on who’s got their name in the spotlight and who’s making headlines after the weekend for the wrong reasons.

Georgia knock on the door: Their second triumph of the year over a Tier 1 nation came on Saturday when they shocked Wales 13-12 at the Principality Stadium in Cardiff. For a long time the Lelos have been knocking on the Six Nations door and now it certainly needs to be opened as this was a strong Welsh team on paper. So don’t take anything away from Georgia’s weekend success. The full-time scenes were wonderful to watch, but the belief that they could come across the line ahead grew as the game progressed, with their crush demolishing their Welsh counterparts particularly late. What a day for inspirational head coach Levan Maisashvili and his squad.

Finn Russell and Scotland: It was a remarkable performance by Russell and company at Murrayfield as they showed their ball-handling prowess, albeit against 14 players (we’ll get to that red card later). It was as close to a full performance as you’ll see in Scotland as everyone pitched in to allow the likes of Russell to orchestrate a 52-29 win in eight tries. Racing 92’s fly-half pulled the strings majestically throughout the match, but also hat-trick hero Darcy Graham and two-try player Sione Tuipulotu, who arguably had her best game in a Scottish jersey, also deserve a mention. This win is such a positive end to 2022 for the Scots as they head into a year of Rugby World Cup with tails up.

Finn Russell was named as @thefamousgrouse player of the game. pic.twitter.com/U0SYTu0fnj

Springbok fight back: After a winless lead ahead of last weekend’s game against Italy in Genoa, the pressure on South Africa has increased. But the Springboks showed their class on Saturday with an impressive 63-21 win over the Azzurri, during which they ran an astounding nine times over the white limestone. Kurt-Lee Arendse led with a brace against a dangerous Italian side as the result finally gives South Africa positive press on the tour after Rassie Erasmus dominated the headlines for the wrong reasons. Now the Boks are hoping to end the year with a win over England at Twickenham in what is a delicious way to end the year-end tests.

England’s unreal end: If the Springboks can do that this weekend, they’ll be hoping to face the England side who played New Zealand for about an hour, rather than the side in the closing stages. Indeed, it was a performance by England’s Jekyll and Hyde as they fought their way back from 25-6 thanks to three late tries that saw back-up Will Stuart (2) and full-back Freddie Stewart with fly-half Marcus Smith pass Shift into gear as he caused all sorts of trouble for the All Blacks late on. It was a brilliant finish from the Red Rose that made the decision to throw out late all the more confusing when New Zealand were on the ropes. Should they have kept playing?

The Amazing Kevin Sinfield: He may have made his name in rugby league but he has done so much for rugby union in such a short space of time, both on and off the field. Playing a key role in reviving the Leicester Tigers to become Premiership champions again was quite an achievement but what he has done to support research into motor neuron disease has been stunning. Last week, Sinfield ran seven ultramarathons in seven days for a cause that benefits former Leeds Rhinos team-mate Rob Burrow, Scottish legend Doddie Weir and many others. Sinfield is quite an extraordinary man, having raised £1.79million and counting. Surely a knighthood is coming?

We could all use a friend like Kevin Sinfield who just completed an incredible 7 ultramarathons in 7 days in support of MND research and his ex-teammate Rob Burrow.#RLWC2021 | #Ultra7in7 pic.twitter.com/uyAAXnOdOk

World Cup for Portugal: Congratulations to Portugal who finished bottom of next year’s Rugby World Cup after a late 16-16 draw with USA in Dubai. Samuel Marques’ penalty meant they entered the top tournament by a points difference, while Os Lobos was rewarded for being placed in the same pool as Australia, Wales, Fiji and Georgia. The full-time scenes were amazing to watch as now all roads lead to France for Portugal. However, one has sympathy for the USA as it is a cruel way to miss the event.

The moment Portugal achieved their first RWC in 16 years!pic.twitter.com/NHbMGxLLIg

World Rugby Awards Winners: Josh Van der Flier of Ireland in the back row and Ruahei Demant of New Zealand were the big winners at Sunday’s star-studded world governing body awards ceremony in Monaco as they scooped the Men’s and Women’s Player of the Year awards. Van der Flier was rewarded for his outstanding form which helped his country to their historic series win over the All Blacks in New Zealand, while Demant spearheaded the Black Ferns’ triumphant World Cup campaign recently played out on home soil. Among the other winners were New Zealand rugby director Wayne Smith, who was named Coach of the Year, Italy full-back Ange Capuozzo and Black Ferns winger Ruby Tui, who won the Men’s and Women’s Breakthrough Player of the Year awards respectively walked away .

The 2022 Women’s and Men’s 15s Player of the Year in partnership with @MasterCard#WorldRugbyAwards pic.twitter.com/Sunkoyu6ox

Marcos Kremer sees red: what was he thinking Kremer gave referee Karl Dickson every chance to wave the red card against Scotland as he smashed into the ruck from long range, making direct contact with Jamie Ritchie’s head and doing so with a swinging arm and what looked very much on purpose. It ultimately cost his country any chance of a win at Murrayfield in a disappointing end to the year by Kremer and the Pumas. Both the player and the team have been outstanding throughout 2022, with Argentina’s discipline improving of late until last weekend. Hopefully Kremer will learn a hard lesson, but there is little defense for what he did as it was as clear-cut as it gets.

Shocking defeat for Wales: After this latest setback for the team, the knives are certainly out in Wales. A home defeat to Italy in the Six Nations was seen as the low point of 2022, but Georgia had other ideas as they celebrated a historic win at Principality Stadium on Saturday. This result will see questions asked from top to bottom of the Welsh game as their descent down the World Rugby Rankings continues. At least they have a chance to save their year against Australia on Saturday. But another loss and a poor performance, and could we possibly see a big loss in coaching ahead of the World Cup? This tweet below will make difficult reading for Wales fans.

On the left is the World Rugby Rankings when Pivac was announced as Wales manager.

On the right is the same table before it was beaten at home against Georgia.

Shocking game in Dublin: It wasn’t pretty, far from it. Many had expected a vibrant gathering to round off a busy day of the Fall Nations series, but what followed was far from that. The score was 3-0 after 54 minutes and 3-3 after 65 minutes before the game in finally came to life in the closing stages. Ireland head coach Andy Farrell admits his side are “busy” ahead of the World Cup as the world no. 1 hasn’t really fired this autumn. Australia meanwhile, despite improvements on this tour, can’t hide from their results.

Whoever wins, we’re all losers because we gave up our Saturday night for it #IREvAUS

This incident with Nic White: After that game at Aviva Stadium, the hot topic in the post-match was how Wallabies scrum-half White was allowed to return to the field after being seen staggering and clearly shaken from a punch. The ensuing studio debate between Rob Kearney, Andrew Trimble and Matt Williams is well worth watching, but we know the Australian shouldn’t have come back. As former Ireland full-back Kearney says, what happens if he takes a second hit to the head after returning to the field? As a matter of fact.

Rob Kearney: “You think he doesn’t have a concussion?”

Matt Williams: “I’m not a doctor.”

Rassie Erasmus blocked: Rugby’s most vocal director on social media was banned from World Rugby for two games last week, and rightly so after his continued tweets, which he insists are “messages” for Springbok supporters. Erasmus needs to be disciplined internally by SA Rugby, word from head coach Jacques Nienaber or even his players, but the latter doesn’t seem likely. The video tweets have fueled an ongoing theme in South African media blaming officials, with Rate the Ref articles and YouTube accounts fanning unnecessary flames.

🗣️ “There are various issues with such a high profile person in the game venturing into public forums so frequently and in such a manner.”