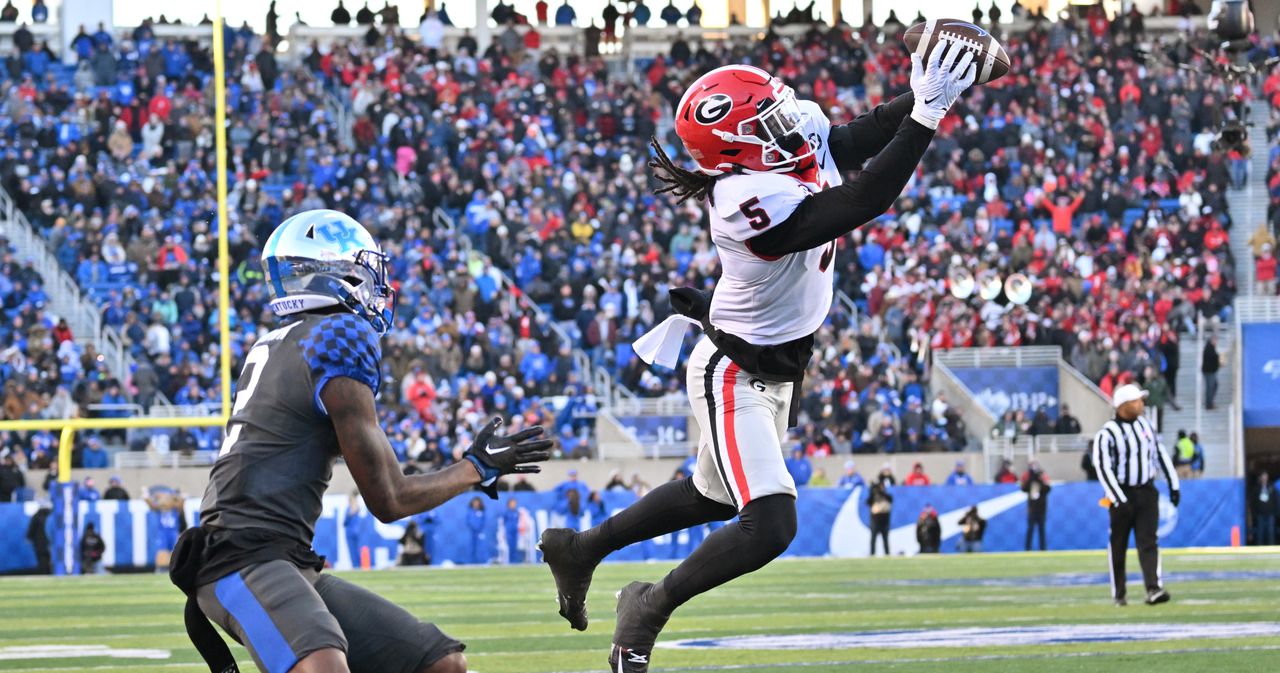 LEXINGTON, Kentucky – They say good teams win and great teams cover. Georgia didn’t cover on Saturday and looked far from a great team in their 16-6 win over the Kentucky Wildcats.

Kentucky limited Georgia to just three drives in the first half. All ended in field goals. Georgia had another red-zone drive that saw the Bulldogs tamped twice when they needed just one yard.

Then again in the fourth quarter, Georgia needed a yard to put Kentucky away and couldn’t pick up that yard.

None of that mattered too much as Kentucky struggled to score. The Wildcats could move the ball into Georgia territory but couldn’t do much once they got to that side of the field.

The win puts the Bulldogs 11-0 in the season and a perfect 8-0 in SEC. Kirby Smart is likely to take the lead given Saturday’s cold and windy conditions.

But that was far from a great performance from the country’s No. 1.

When Georgia faced Missouri earlier this season, they failed to score an offensive touchdown in the first half and struggled in the red zone.

It looked like the Bulldogs would be following the same offensive script on Saturday. The Bulldogs were able to move the ball and jabbed just once in the afternoon. But three field goal attempts in the red zone and a goal-line stand by Kentucky held Georgia down to just 16 points in the afternoon.

The Georgia defense played up to standard for most of the afternoon. It held Kentucky for all but one drive from the end zone and at one point traveled three consecutive three-and-outs together.

It forced stops when Kentucky got on Georgia’s side of the field and Kelee Ringo was intercepted in the first half.

But then, after the Bulldogs packed out to open the fourth quarter, Kentucky went on for 99 yards in nine games. It was the first time Georgia had given up a 99-yard drive since 2014.

The Bulldogs responded on the next drive, but not before Kentucky drove deep into Georgia’s end of the field again. A sack from Javon Bullard and Robert Beal eventually forced a Kentucky field goal, which was missed.

The Wildcats struggled to run the ball as the Wildcats finished with 89 rushing yards in the afternoon. Quarterback Will Levis didn’t throw a touchdown, although he was able to move the ball thanks to an excellent performance from Barion Brown. The freshman receiver lit Georgia’s secondary for 145 yards on 10 receptions. He showed he was able to stay open consistently against an otherwise strong Georgia secondary on Saturday.

Holding Kentucky to just six points in the afternoon did the job for the Georgia defense. Jamon Dumas-Johnson and Smael Mondon both had strong games for Georgia as the former had xx tackles while the latter had xx. Though both will most likely be upset about the touchdown drive in the fourth quarter as it’s not up to Georgia standards.

Georgian football struggles through a fast first half

Georgia had the ball for just three possessions in the first half. The same goes for Kentucky.

The Bulldogs scored on all three of their possessions, while Kentucky did not. But Georgia went into halftime with just a 9-0 lead, having to settle for field goals to get on the board.

Kentucky deserves credit for staying tight in the first half. However, it loses points because it owns the ball for a total of 16:10 on its first two drives and walks away with zero points. The Georgia defense stuffed Kentucky on a fourth and one on the first drive, but Will Levis threw an interception to Kelee Ringo to end the second.

Offensively, Georgia proved they can move the ball even when deep passing was unavailable due to windy conditions. Bennett’s longest completion of the first half was 13 yards and both passes went to players behind the line of scrimmage.

Kenny McIntosh again showed his all-around skills, acting as both a running back and pass catcher. His eight first-half touches marked Georgia for 76 yards, 26 of which assisted Georgia’s final field goal of the half.

This wasn’t the first time this season that Georgia has struggled for touchdowns in the red zone, with the Missouri game being the most obvious example. That being said, it’s difficult to find too much fault with Georgia’s first-half play.

Georgia Football News and Notes from the Kentucky Game

Javon Bullard started this week after exiting the game with a bruised leg last week.

Tate Ratledge made the trip to Georgia but did not start as right guard. That went to Devin Willock. Xavier Truss was the starting left guard.

AD Mitchell once again did not make the trip with Georgia. Tight end Arik Gilbert also did not travel this week. Darris Smith traveled in his place.

Jalon Walker again warmed up with the outside linebackers during the warm-up. He came to Georgia’s inaugural drive to have a role in Georgia’s pass-rushing package.