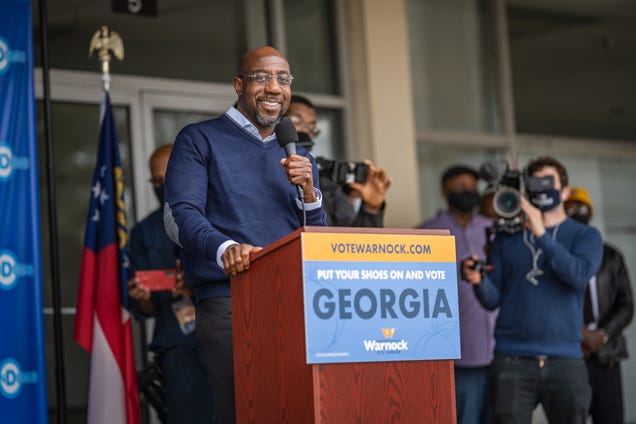 It’s a victory for Georgia Democrats this week when a Fulton County judge ruled Friday that early voting in the state’s runoff election could actually happen on the Saturday after Thanksgiving. This comes after arguments were advanced that state law precludes such an action.

A 2016 state law that bans early voting on the second Saturday before a runoff election, if that day falls a day or two after a federal holiday, has been argued by Georgia Democrats to disenfranchise voters who don’t attend during weekday hours participate in early voting. This population, made up largely of college students, low-income voters, and people of color, tends to vote democratically.

According to the New York Times, Judge Thomas A. Cox of the Superior Court of Fulton County issued a 10-page order ruling that the law does not apply specifically to runoff elections and that Saturday’s vote should be considered an “essential part.” . of the election process. This is especially true given that Georgia’s runoff election window is no shorter under the grand election law Republicans passed last year. The runoff election will take place on December 6 this year.

Additionally, Judge Cox ruled that without a vote on Saturday, Democratic groups and their constituents would suffer “immediate and irreparable harm.”

While Secretary of State Brad Raffensperger, a Republican, initially stated that Saturday’s vote was possible during the runoff, attorneys in his office said it would conflict with the upcoming holiday weekend. The bureau also noted that the Saturday after Thanksgiving would fall on the day after the state holiday that once celebrated the birthday of defamed Confederate General Robert E. Lee.

On Tuesday, however, several Democratic groups, including Sen. Raphael Warnock, sued to keep Saturday’s elections, saying the bureau had interpreted the law too narrowly and such access to the polls would disenfranchise voters, who most commonly support the Democratic Party.

During a Tuesday news conference, Warnock doubled down on his support for the lawsuit and also persuaded county election officials to extend their voting times.

When the celebratory news was released on Friday, the Democratic Senators’ Campaign Committee, the Georgia Democratic Party and Mr. Warnock’s campaign called the judge’s ruling “a victory for every Georgia voter, but especially for workers and students who want a bigger one.” will have a chance to make their voices heard in this election.”

They continued in their statement by saying, “We look forward to the districts’ announcement that they will give Georgians the opportunity to vote on Saturday, November 26.”

More from The Root