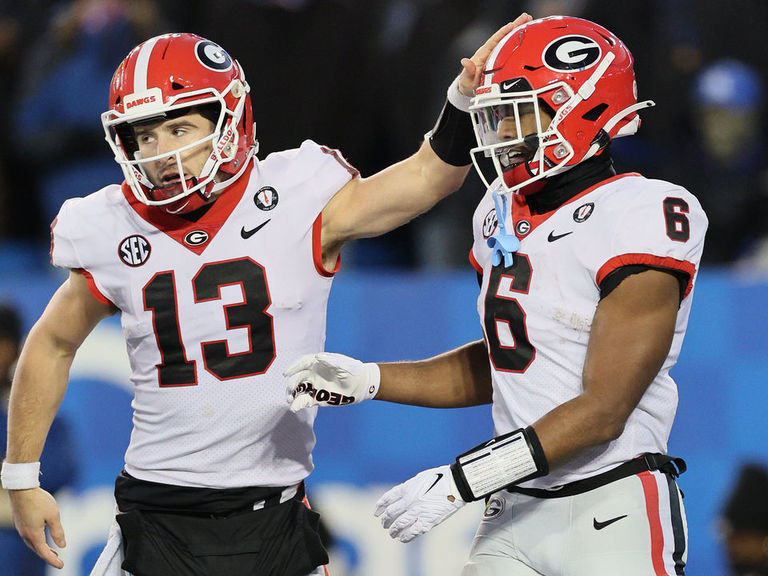 LEXINGTON, Ky. (AP) — Kenny McIntosh rushed for a career-best 143 yards, including a crucial 9-yard score late in the third quarter, and top-ranked Georgia resisted Saturday’s Kentucky fourth-quarter rally with a 16: 6 win and his second straight unbeaten season in the Southeastern Conference.

The Bulldogs (11-0, 8-0 SEC, No. 1 CFP) clinched the Eastern Division title last week and were aiming for another perfect finish to league play.

They were successful but not without difficulties in cold, windy conditions, settling for three field goals from Jack Podlesny before McIntosh’s TD provided the cushion they needed.

“With the weather conditions, we’re going to play games like this,” said coach Kirby Smart. “But I’m really proud when our boys have their backs to the wall, how they fight against what they’re doing. Certainly we could have played better, probably in the red.”

Georgia’s chance to complete the lead ended with downs at Kentucky’s 1. The Wildcats made it interesting with a 99-yard drive that ended with an 8-yard touchdown pass from Will Levis to Barion Brown. Levis’ two-point conversion pass failed, and the chance to make it a one-goal game died when Matt hooked Ruffalo’s field goal to the left after a low, rolling snap.

Kentucky (6-5, 3-5) then turned it around on downs and lost for the fifth time in seven games.

McIntosh hit a career-high 26-yarder 19 times for the Bulldogs, who defeated Kentucky 365-297 and 247-89 on the ground. The senior defenseman’s previous best rush was 90 yards on 16 attempts against Florida last month. Georgia quarterback Stetson Bennett completed 13 of 19 for 116 yards with an interception.

“Kenny ran the ball really well tonight,” added Smart. “Probably could have been more, but he had to share with others.”

Levis completed 20 of 31 for 206 yards with an interception for Kentucky, who lost their 13th straight game to Georgia.

It wasn’t pretty, but Georgia should maintain its place at the top of the AP Top 25 and college football playoff rankings.

Georgia: Denied their usual offensive offensive prowess by Kentucky’s rigid defense, the Bulldogs had to settle for whatever they could get their hands on. The numbers ended decently, converting 6 of 12 third-down chances and edging out possession from the Wildcats (30:02-29:58). Their stingy defense scored a three-quarter shutout highlighted by Kelee Ringo’s end zone interception from Levis and held off Kentucky’s last-ditch attempts to close it.

Kentucky: With nowhere to go but up all-around disastrous performance against Vanderbilt, the Wildcats did whatever they had to do to slow Georgia and pull off a few critical defensive stops. They still faced a 16-point hole, although Levis did his part with his arm and feet to get them on the board against a bullish ‘Dawgs defense.

“After a tough defeat a week ago, our priority was to motivate them to play at a high level,” said coach Mark Stoops. “It took a lot of digging and soul searching and the competitive nature of our players to reinvest and get involved and make that kind of effort. We came up short, but the effort, the preparation was there.”

Kentucky host state rivals Louisville on Saturday and are aiming for their fourth consecutive win.