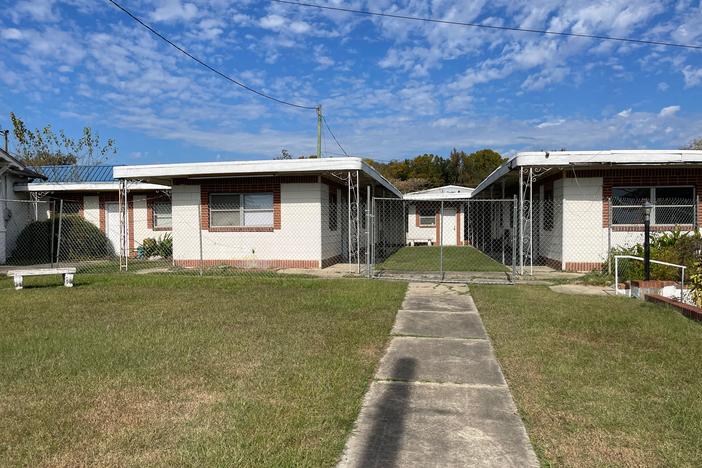 A 1958 black-owned motel in central Georgia is among 10 historic sites that are among Georgia’s newest places under threat.

The Georgia Trust for Historic Preservation’s annual list prioritizes the organization’s work for the coming year and draws attention to threatened buildings.

Trust President and CEO Mark McDonald said the Dudley Motel in Dublin closed in the 1980s.

“It was listed in the Green Booksaid McDonald, referring to the mid-20th-century publication used by black travelers to safely navigate anti-racial regions of the country. “It’s abandoned now, but it’s completely intact. It served Andrew Young and Martin Luther King Jr. as they traveled for their civil rights work during this period. It really is a time capsule.”

McDonald said 85% of the buildings classified as places at risk in previous years have been saved from demolition, although not all saved buildings have been renovated.

In some cases, the most immediate goal is simply to stabilize a property.

That’s what McDonald says is needed on Atlanta’s famous Auburn Avenue, where a building that once housed several 20th-century black businesses, including a branch of the Atlanta Life Insurance Company, is at risk of demolition.

“Unfortunately, the tornado that devastated downtown Atlanta in 2008, including the roof coming off the Phillips Auditorium, also damaged this building,” he said. “And it just stands there, without a roof.”

McDonald said listing properties in such conditions shouldn’t bring “shame” on them, but rather economic opportunity.

“The preservation of historical monuments creates two jobs for every job that the new building creates,” he said. “If you’re restoring an older building, don’t buy entirely new materials. They pay labor to refurbish the existing materials.”

Here is the full list of endangered places in Georgia 2022 as provided by the Trust:

A contributing property in the Sweet Auburn National Landmark District, 229 Auburn Avenue was home to several black businesses in the 20th century, including a branch of the Atlanta Life Insurance Company.

In March 2008, a tornado damaged several buildings in the precinct adjacent to 229 Auburn Avenue. The former Atlanta Life Insurance branch still stands, but has been vacant for years and was identified as the most vulnerable building in the Sweet Auburn District in a National Park Service study.

Beulah Grove Lodge No. 372, Free and Accepted Masons, was built circa 1910 as the brainchild of freedman Jack Smith, who provided the land for a Masonic lodge and school for Douglasville’s black community. The building is owned by the neighboring Pleasant Grove Baptist Church and has not been in regular use for nearly four decades.

Beulah Grove Lodge and School is an important piece of history in Jim Crow South. Due to its infrequent use, the lodge has deteriorated to a dangerous condition, and rehabilitation efforts have been complicated by the pandemic.

Chickamauga Lodge No. 221, Prince Hall Affiliate of the Free and Accepted Masons, was organized in 1916 by former enslaved and first-generation freed Black Americans. The current building was completed in 1924.

Immediate needs include a new roof and structural evaluation. The interior and exterior of the building are in need of renovation. The building, now overseen by local Freemasons from other regional lodges, remains an important site for Chickamauga’s black community.

The former Dasher High School was built in 1928 as Valdosta’s third black public high school and is the only surviving school building from this period. Several prominent leaders of the Valdosta community graduated from Dasher, including writer and journalist Louis E. Lomax, the nation’s first black television journalist. Today, the Coastal Plain Area Economic Opportunity Authority uses the building to provide services to low-income households.

Dasher High School continues to serve as a community center for the citizens of Valdosta. However, parts of the building, particularly the auditorium, are unsafe for the public. Partners involved hope to preserve this part of Valdosta’s black heritage by restoring Dasher High School and using it to better serve its residents.

Herbert “Hub” Dudley, a prominent black business owner in Dublin, opened the Dudley Motel in 1958 to accommodate black travelers during the turbulent civil rights era. It was the first black hotel in the area and was listed in black guidebooks like this one Green Book. Notable guests included Martin Luther King Jr. and Andrew Young. In addition to this 12-unit motel, Dudley also owned the nearby Retreat Cafe and gas station.

The Dudley Motel closed in the 1980’s and has been vacant ever since. Although identified as a significant site with potential for heritage tourism, a conservation plan is required to protect and rehabilitate the hotel, both for its cultural significance and for its mid-century architecture.

The earliest parts of Lee’s Mill date from the pre-war period. Located on the headwaters of the Flint River, the mill was operated by a pioneer Clayton County family until the death of their patriarch, WL Lee, in 1933. The mill has been designated for the development of heavy industry for decades.

The ruins are a small part of Georgia’s rural past, hidden in the shadow of industrial expansion. As a result of such development, the Flint River experiences intense flooding due to runoff from the hard surfaces of the upstream airport and parking lots, eroding what remains of the mill structure.

Built in the late 1830’s as the home of Brig. Gen. and State Senator Eli McConnell, the McConnell-Chadwick House was one of the earliest structures in Cherokee County. During this time, McConnell, also an enslaver, had been authorized to mediate disputes between Native Americans and white settlers in the area and to sell property after the 1838 Cherokee resettlement.

Architecturally significant for its Greek Revival design, McConnell-Chadwick House is uninhabited and threatened with rapid development. The preservation of this historic home has the potential to allow the public to understand the full history of the area, including McConnell’s role in the forced displacement of native Cherokee, white expansion through the land lottery system, and the development of the area through local and state policies .

One of the last Greek Revival buildings in Georgia, the Old Campbell County Courthouse was built in 1871 and served as a courthouse until 1932, when Campbell County was incorporated into Fulton County.

The courthouse had been vacant for two years when the building caught fire on August 31, 2022, forcing firefighters to punch holes in the roof and flood the building with water. Community members hope to gather support to stabilize and rehabilitate this historic courthouse and are taking the opportunity to develop a plan to put the building back into productive use.

Formerly the Wilkes County Training School, it was founded in 1956 as the Equalization School, which amalgamated approximately 40 rural black schools in Wilkes County and educated black students from first through 12th grade. During integration in 1970, the previously separate white high school on this campus was merged and the ninth through twelfth grades were renamed Washington Wilkes Comprehensive High School.

The Training School, vacant since 2011, is an important resource for telling the story of black public education. The building suffers from lack of maintenance and decay. Residents hope that the Wilkes County Training School will be restored, used as a new site for the community, and recognized as an important piece of local heritage.

This home, originally built for Presley and Rachel Thedford Yates, is one of the few remaining antebellum homes in Catoosa County. Presley Yates received the land in the 1832 Cherokee Land Lottery, and the house was completed in the late 1830s, with later additions in the early 1900s. Presley Yates served as a delegate to the Georgia Secession Convention in 1861 and voted against secession despite being an enslaver.

Due to the home’s location adjacent to a critical water source that provides much of Catoosa County’s water supply, public access and rehabilitation are not currently viable. The opportunities to save the Yates House may be limited, but the property owner, local history society and community advocates are committed to preserving this early resource and its unique history.