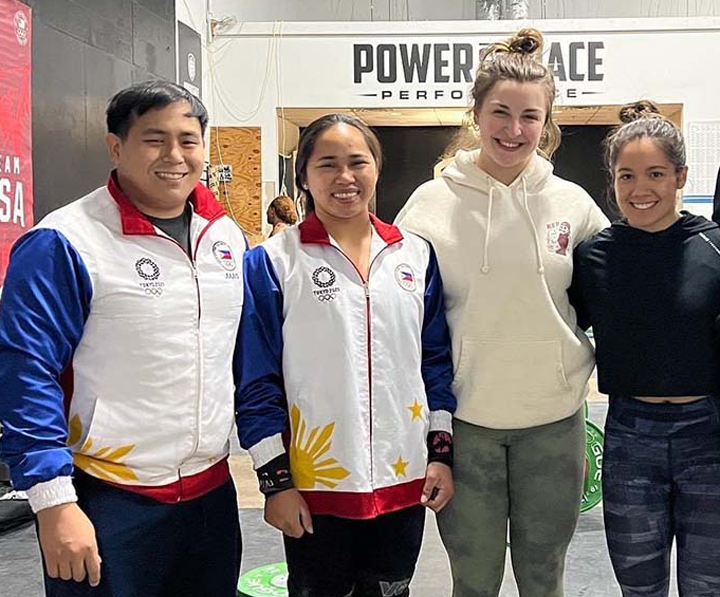 FOR the Tokyo Olympics it was Malacca. For next month’s World Championships, it’s Suwanee, Georgia.

Hidilyn Diaz-Naranjo is in the middle of her Atlanta training camp at the Power and Grace Performance Gym preparing for the World Championships that Colombia is hosting in Bogotá from December 5th to 15th.

A World Championship gold medal is still missing from Diaz-Naranjo’s collection but she hasn’t promised a title in the Bogota World Championship but has assured a strong performance in the first of six qualifying competitions to qualify for the fifth Olympics in Paris 2024.

“I can’t promise anything, you know that. I don’t make promises, but I will do my best for the country,” Diaz-Naranjo told BusinessMirror via an internet call. “It is important that I am there for my first Olympic qualifying game. I just have to be at my best as always.”

“I will do my best to make these World Championships unforgettable,” she stressed.

Diaz-Naranjo is at the Suwanee facility, home of the US weightlifting team, with Julius Naranjo, her husband and a strength and conditioning coach and head coach. Other US and foreign athletes complete CrossFit training at the facility.

She will compete again in the women’s 55kg class in Bogota, the same weight class in which the country won its first Olympic gold medal in Tokyo last July.

On their way to Olympic gold, the Naranjo couple were imprisoned in Malacca at the start of the Covid-19 pandemic in March 2020. They decided to keep their training camp there for the next 16 months.

“I’m fine…okay,” Diaz-Naranjo said of her condition for the Worlds.

Despite the cold weather in Atlanta — the temperature dropped to 5 degrees Celsius — Diaz-Naranjo said they adjusted to the environment after arriving in Georgia almost two weeks ago.

Before flying to the US, the couple undertook intensive training at Diaz-Naranjo’s weight league training center in Jalajala, Rizal.

“We are treated like a real member or part of the family here in training and are welcomed and accommodated,” said Diaz-Naranjo, who will meet with the Filipino community in Georgia on Monday. “They help and inspire me a lot to do better.”

Diaz-Naranjo’s nutritionist Jeaneth Aro will arrive on November 28 to oversee Diaz-Naranjo’s training and to meet her nephew, Rowel Garcia, who will be Julius Naranjo’s assistant.