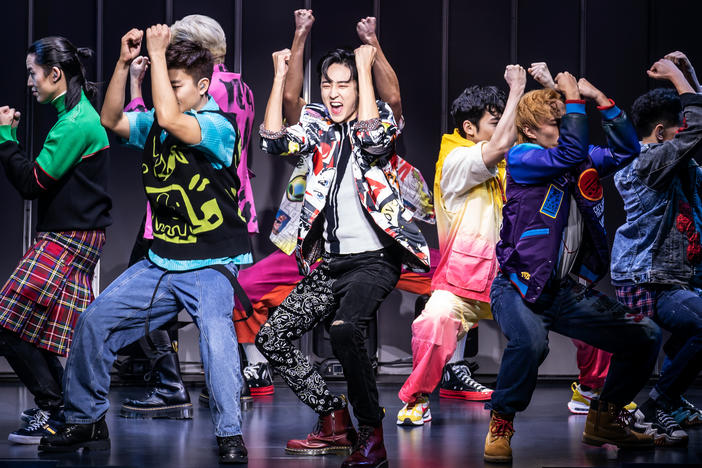 The South Korean cultural phenomenon K-Pop is now a Broadway musical – simply called that KPOP. The show is a kind of MTV behind the music Story about a fictional Korean label, RBY, presenting a concert in New York City.

Shortly after the beginning of KPOP, immerses the audience in a high-energy performance of a song called “This is My Korea.” A five-singer girl group, RTMIS (pronounced Artemis), sings in Korean when they come on stage. The singers swing their arms and hips in synchronous, repetitive motions, then switch to English, as in many K-pop songs.

They are followed by a nine-singer boy band, F8 (pronounced Fate), who play the same material but with macho, smoldering moves. And then they all sing together, doing dot moves choreographed by Jennifer Weber where the performers make a “K” with their hands every time they sing the word “Korea.”

“It keeps coming back and becoming a visual hook at the same time that it’s a vocal hook to,” Weber said.

KPOP is an unconventional musical – there are no traditional solos or duets in which characters sing their feelings directly to the audience or to each other.

But director Teddy Bergman said “This is My Korea” still works like an old-fashioned Broadway opening number.

“There are many aspects in which this song resembles our version of ‘Tradition’ violinist [on the Roof]. It represents a series of [characters]; kind of a big thematic banner for the evening,” he said.

Off Broadway, the show asked, “Why isn’t K-pop a hit in the US?” Now that’s changed.

The show originally premiered in 2017 as an immersive Off-Broadway play, with audiences moving from room to room, seeing portions of rehearsals, auditions, and recording sessions before gathering in a large room to watch a concert. At the time, K-pop hadn’t really cracked American cultural consciousness, aside from PSY’s monster hit Gangam Style.

“The stimulating question of the show Off-Broadway was why K-pop has been successful all over the world, with the notable exception of the United States?” said Bergman. “And thankfully, in those five years, that’s all changed as K-pop acts have had tremendous and wonderful success in the United States.”

So the current production has turned things upside down, immersing its audience in dynamic performances of on-point songs in multiple styles with outrageous costumes. Because it’s a documentary-style story with flashbacks, audiences get a glimpse into the pressure-cooker K-pop factory where performers are pushed to perfection, often at personal sacrifice.

“What really interested me was the psychology behind an international star,” said Jason Kim, the Korean-born writer on the series’ screenplay. He says he uses some tropes from Korean TV melodramas. “What do people like about BTS, what do people like [like] CL… What does she think when she gets up in the morning and what is her everyday life like? And how is it before she goes on stage and what does she think about her stage performance and how does that affect your relationships?”

Kim said the show explores the dynamic between “this very Eastern concept of duty that comes with self-expression … How does it look when the two conflict? And for me, that’s really a principle that holds everything together.”

The show has several cast members who are indeed K-pop idols including Luna, who plays the show’s star, MwE. Luna has also acted in many musicals such as Naturally blond, in Korea. Her presence gives her an air of authenticity.

“She’s one of those people who has this very rare ability to be almost transparent on stage,” Bergman said. “It’s so easy to read everything that’s going on with her. And as a singer and dancer she is simply virtuoso.”

One of the show’s songwriters is Helen Park, who was born in South Korea and grew up loving K-pop. She is the first Asian songwriter on Broadway and has created all the electronic backing tracks, accompanied by a small offstage band. Park said the score reflects the wide variety of K-pop styles.

“Every musical moment is different in some way,” Park said. “We have ballads, we have reggaeton, we have new disco, we have progressive house. We have everything in the pop medium.”

As catchy as the music is, Max Vernon, who co-wrote the score with Park, said they wanted the songs to reflect the emotional states of the characters.

A song called “Wind Up Doll” is performed by MwE after rehearsing with an abusive choreographer.

“This song is so sparkling, it’s so bubbly. It puts a smile on your face,” Vernon said. “But if you really listen to the lyrics, they’re pretty scary. You know, it’s like, ‘You push the gear / touch me like that / you wind me up like clockwork / and I obey.’

At times the audience KPOP acts like a concert, not a Broadway show – people cheer and cheer and move to the music.

Fans learn K-Pop dances from videos, then post their own versions on social media. Choreographer Jennifer Weber said some fans of the musical would do the same.

“It was so cool to see that in our audience, to see people already starting to do covers of things and becoming fans of the groups [in the show].”

The show is currently in preview on Broadway – it opens on November 27th.