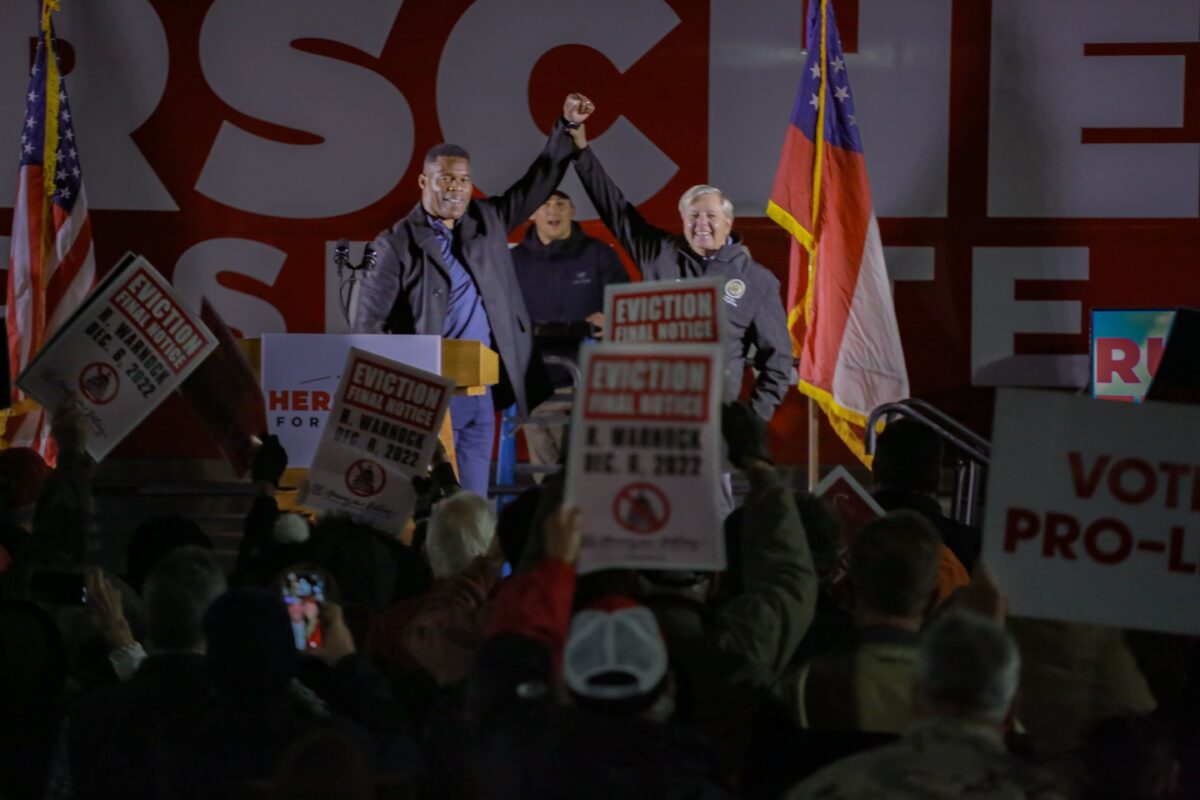 “What we need to understand is that if we win this seat, the course of the country will be changed. It changes the Republican Party forever because Herschel Walker is a transformational figure in American politics,” Graham told a gathering of nearly 400 people in Gainesville on scenic Lake Lanier in north Georgia.

He got the crowd cheering Walker on a cold evening outside in front of the Carroll Daniel Construction building in downtown Gainesville. Graham should have been accompanied by fellow senators Tim Scott (RS.C.) and John Kennedy (R-La.), but they had to return to Washington to vote, a Walker aide said.

Walker’s campaign has garnered support from fellow Republicans in a race that will determine whether Democrats must control the Senate or share power with Republicans. Georgia Gov. Brian Kemp, who clinched a crucial victory over Stacey Abrams in another closely watched race last week, is deploying his campaign machinery on Walker’s behalf.

“Want to feel warmer?” Graham asked the crowd, who were wrapped up against temperatures plummeting into the 20s overnight. “We fired Nancy Pelosi today.”

Various supporters held signs that read “Eviction: Final Notice: R. Warnock,” a theme Walker picked up after it was revealed that Warnock’s church, the Ebenezer Baptist Church, once led by Martin Luther King Jr. recently had tenants evicted from a Church-owned apartment building because they owed their rent by just $28.

“The meanest people in the world are liberals. And apparently they don’t know how to manage an apartment building,” Graham said, picking up the topic.

Graham compared Walker’s treatment by Warnock’s campaign, which spent more than $100 million on ads attacking Walker’s chaotic personal life in the general election, to the Democrats’ harsh treatment of Brett Kavanaugh when he was nominated for the US Supreme Court.

“Remember Kavanaugh? Do you remember what they tried to do to him? They tried to ruin the man’s life. A more qualified person has never been nominated. And we’re talking about a party in high school that no one remembers.”

“When it comes to liberals, there are no rules. When it comes to conservatives [liberals] can do anything and say anything,” Graham told the crowd. “Herschel has confessed up to $100 million in lies. All the media in the country is in the Democrats’ pocket, and he’s still standing. Let me tell you – he’s a man.”

Walker appeared to warm to the runoff challenge in his blunt speech. He quoted Scripture to criticize Warnock’s evictions and his pulpit sermons on white privilege.

“I was made for this,” he told his followers.

“His pronoun,” Walker said of his opponent, “will be ‘former senator.’ “

The Walker-Warnock matchup is the last tie in the Senate after Nov. 8 as neither candidate garnered 50 percent of the votes required for the Georgia election.

With Democrat victories in a few later races, the Georgia race lost some of its relevance. The Republicans, whose predicted red wave washed up on the voting rocks, can no longer win a clear Senate majority.

But it’s still important. The Democrats hold a 50-49 lead. If Walker wins and denies Warnock’s re-election, the split will revert to the 50-50 division that has been in place for the past two years, with neither party having a majority advantage on matters like committee assignments. Vice President Kamala Harris would conduct the crucial vote. If Warnock wins, it will give the Democrats a 51-49 lead and a clear majority.

Democrats have sued to extend the short deadline for early voting in the runoff to the Saturday after Thanksgiving, Nov. 26. The runoff is the first such statewide election to be held since the state reformed the electoral code to cut the runoff wait from nine to four weeks. Georgia Secretary of State Brad Raffensperger interpreted state law to prohibit this Saturday because it falls within two days of a public holiday. Democrats argued in court filings that the clause didn’t apply to runoff elections.