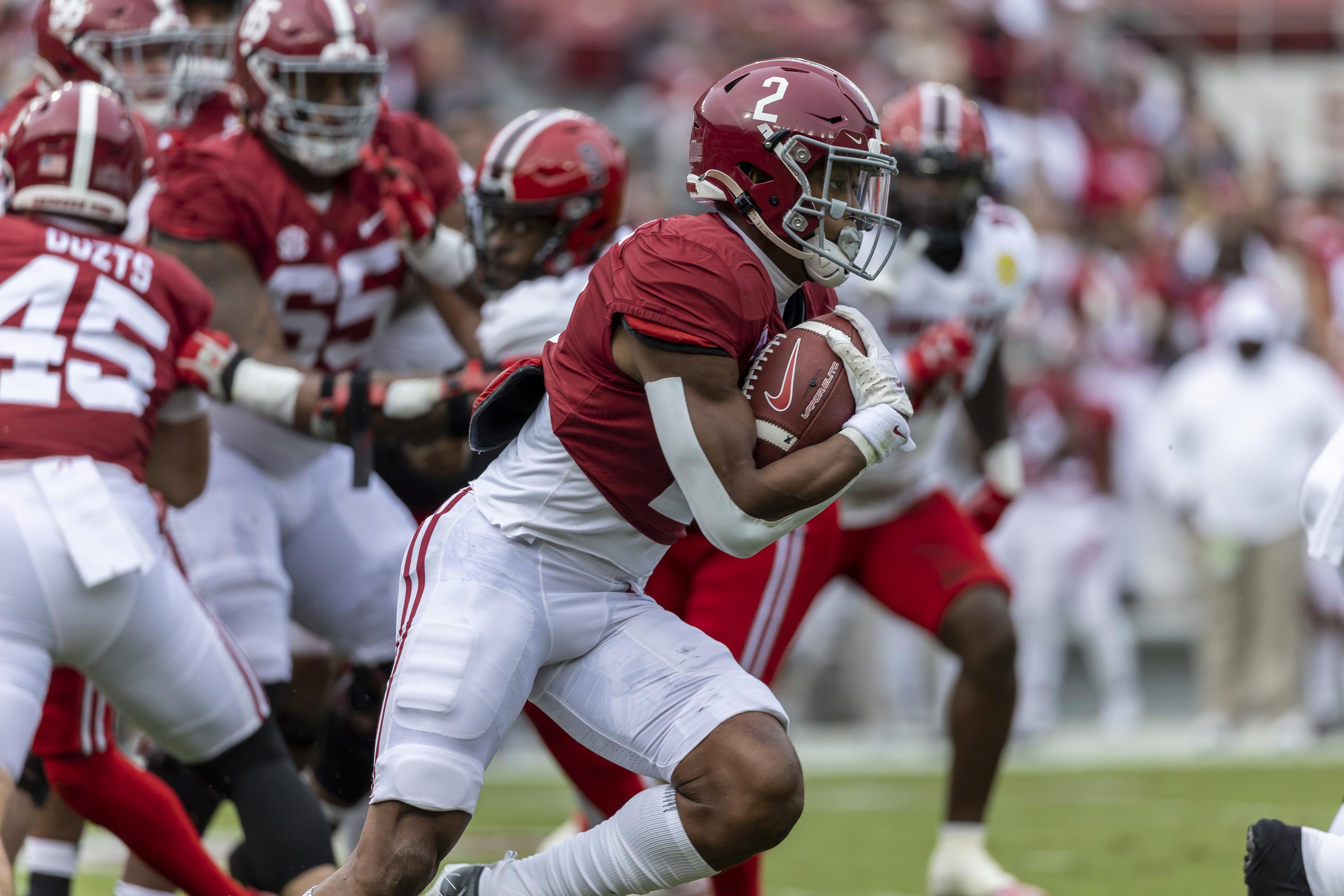 TUSCALOOSA, Ala. (AP) — No. 8 Alabama delivered breakout performances from Jase McClellan and Jermaine Burton in an otherwise lackluster offensive display against an overwhelmed FCS team.

McClellan rushed for a career-high 156 yards and two touchdowns and Burton caught two goals from Bryce Young in Saturday’s 34-0 win over Austin Peay.

The Crimson Tide (9-2, No. 8 CFP) took a while to get going against Austin Peay (7-4) in a Bryant-Denny Stadium that wasn’t much more than half full.

But McClellan and Burton had their biggest games for the Tide, who were already out of Southeastern Conference competition but managed to pick up a win over No. 14 Mississippi.

“Overall, we wanted to build on the momentum that we came back and played at the end of last week’s game,” said Alabama coach Nick Saban. “And of course I thought that’s something we did well today.”

Burton notched his first 100-yard reception game since moving from Georgia with seven catches for 128 yards. McClellan replaced injured star Jahmyr Gibbs (ankle) and scored on rushes for 1 and 9 yards.

McClellan, whose 2021 season was limited to five games because of an injury, was coming off an 84-yard rush against the Rebels when Gibbs went down.

“I always thought he was a really good player,” said Saban. “I think you guys are just beginning to figure it out.”

For much of the game, the Tide was about as listless as the crowd until a 50-yarder from Young to Burton provided a spark. McClellan scored his second goal of the game two games later, and the defense recovered from a fumble on the next possession to set up an Alabama field goal.

Young was 18 of 24 for 221 yards and played into the fourth quarter. The Tide was also without tight end Cameron Latu (ankle) and cornerback Eli Ricks, who Saban said cleared the concussion log.

The Governors had their first-half chances thanks to Tide’s two turnovers in the first quarter, but failed to convert them both times, including a fourth stop in the red. Maddux Trujillo missed a short field goal for Austin Peay after Alabama’s second fumble.

“We know we went up against these guys,” said Governors coach Scotty Walden. “If you watch the whole game, you saw one team fighting to win. We didn’t come here to keep it around. We came here to win the game.”

Alabama scored its second shutout of the season and first since a 55-0 opening win over Utah State.

Austin Peay: The FCS playoff hopeful couldn’t do much offensively, but was good enough defensively to keep it from becoming an embarrassingly one-sided game.

Alabama: It wasn’t the typical wire-to-wire dominance of a Tide team against an FCS opponent, especially in the passing game. Alabama led only 7-0 more than midway through the second quarter but ended up winning the Governors 527-206.

Alabama has struggled to force turnovers all year but has had three against the governors. Kool-Aid McKinstry and Brian Branch each had an interception, and Damon Payne Jr. recovered a fumble on a trick play attempt.

“Three is our goal every single game, so getting to that number was tremendous for us,” said Tide linebacker Henry To’oTo’o.

“If you’re a committee member and you’re watching this game, I don’t see how you wouldn’t want us there,” he said. “We have the CV for it. It’s not just talk, it’s the resume.”

Austin Peay is hoping for an FCS playoff call.