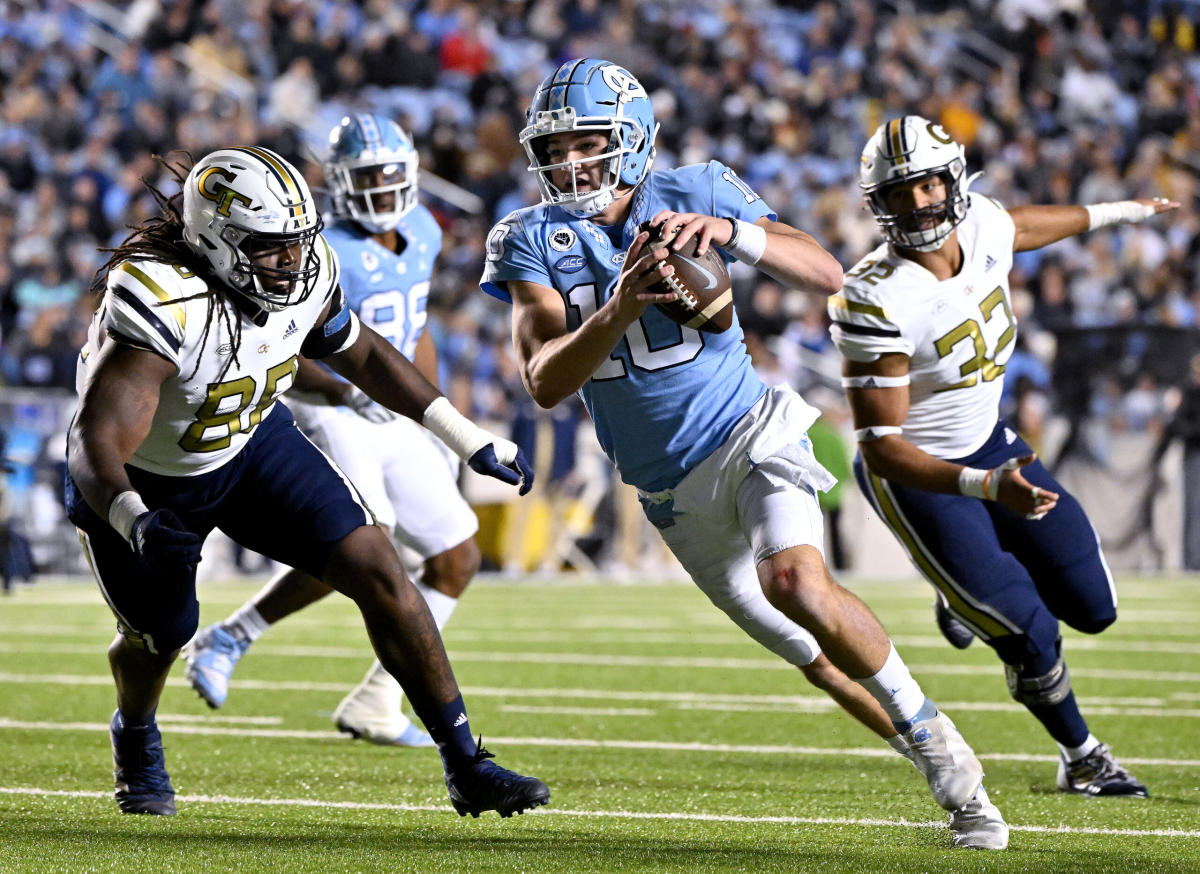 Saturday was breathtaking for the UNC football program on many occasions. Not only did it fall at home to unranked Georgia Tech, but the top-flight offense of the first 10 games of the season was absent.

The Tar Heels fell 21-17 to the Yellow Jackets and what was considered trap play in the encounter turned out to be all of that…and more.

Early in the game, not only did UNC have a deep sleep for the college football playoffs, the Tar Heels were in the midst of a Heisman Trophy campaign for quarterback Drake Maye. Both fell and burned on Saturday.

“I think our entire offense was off,” UNC head coach Mack Brown said after the game. “I’m always scared when you score a goal on the first play, everyone relaxes and thinks we did it. And i hate it. It sounds silly but I hate it. For an immature team, a young team like ours, it’s easy to get complacent and I thought that’s what happened.”

While the offensive struggled immensely, it didn’t start that way. On UNC’s first game, it was an 80-yard touchdown run for Elijah Green. Then, two possessions later, it was a 16-game method for the Tar Heels that ended in three points. After another possession that ended in a drive into the red zone but no points, the Tar Heels slammed to seven just before halftime.

With four minutes to go it was a 17-0 lead and things were going as expected. But then a late touchdown for Georgia Tech turned things around.

“Yeah, we didn’t score any touchdowns in the red zone, we let 14 points off the board in the first half and then they go down and score very easily just before halftime,” Brown said. “…So it’s a 14-point swing, although for us it should have been a 14-point swing.”

In all, UNC had five red-zone drives and one additional drive that ended at the GT 23-yard line. The Tar Heels got away with just a touchdown. Overall, they were just a 2 out of 5 performance in the red zone.

“I think our offense screwed it up,” Brown added. “Six sacks, can’t make third downs, can’t make fourth downs, can’t score in red zone, dropped passes. We get a first down run where there is a fumble and we lose 13 yards. So many atypical things happened tonight, it was a really, really terrible night offensively.

Maye, who came on in five games without an interception, threw one into the red zone with a very poor throw. He also had at least one touchdown in every single game this season. This series ended on Saturday.

Maye finished with his worst performance of the year, catching 16 of 30 for 202 yards and an interception. He also rushed only 13 meters. Completions, passing yards, and rushing yards were the lows of the season.

The connection between Maye and All-American nominee wide receiver Josh Downs was also unusually broken. Downs, who missed part of the first half with a knee injury, had just three catches for 31 yards … on just five goals.

Downs’ final catch of the game came late in the fourth quarter with an important third down in Georgia Tech territory.

What ended up being Downs’ final goal that night summed up the entire game. On a fourth down game at 4-10 in play on the Georgia Tech 19-yard line, Downs was lined up in the backfield next to Maye. Maye rolled out to the right and found a wide open downs in the corner of the end zone. The ball hit Downs right on the numbers and somehow went right between his arms, falling to the ground and ending the Tar Heels’ comeback opportunity.

Overall, the Tar Heels finished for just 365 yards and earned a 4-of-14 win on third downs. Both were season lows.

“They have a 60-yard run that’s called back for a guy who runs over Bryson Nesbit and it’s thrown very, very late. They have a lost touchdown pass, they have another lost pass that they thought was a catch and a fumble and they strike out that one. It was a night in which nothing good happened for us offensively.”

Let us know your thoughts, comment on this story below. Join the conversation today.