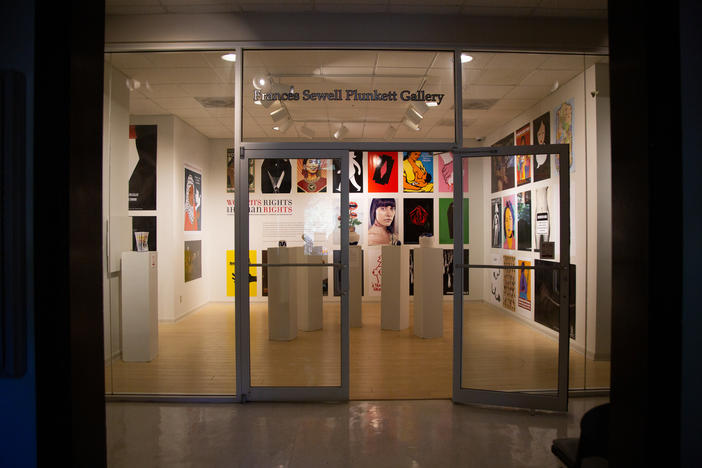 As part of a global exhibition, 50 posters highlighting international women’s rights issues will be on display at Mercer University through January.

The Women’s Rights Are Human Rights exhibition was curated by Elizabeth Resnick, a graphic designer and curator at the Massachusetts College of Art and Design. Its namesake comes from a 1995 speech by then First Lady Hillary Clinton.

“I think everyone was very excited and excited and really thought we were finally going to see the first woman president,” Resnick said.

The exhibition does not show US election campaign posters, but rather politically charged designs from all over the world.

“It’s really important to say, especially for commercial artists, as we’re called, you know, we can use our skills for good,” Resnick said.

The oldest poster from 1987, a design for International Women’s Day, is by Asian-American visual artist Nancy Hom. Most of the 109 posters were created in the 2000s and represent current women’s rights issues such as gender-based violence in Mexico and equal pay in Belgium.

In a series of two posters from 2013 and 2014, Kuwaiti artist Mohammad R. Sharaf uses graphics of a Saudi Arabian couple on a bicycle to bring up a controversial politics. It was not until 2013 that Saudi women were allowed to ride bicycles for leisure, but only when accompanied by a man. The rule has been relaxed, although women still face arrest.

“I just can’t even imagine having such limitations on what you can do,” said Mercer graduate student Haven Estabrook.

Each poster has been created and curated digitally, allowing galleries in 10 countries to host the exhibition simultaneously. In Macon, the posters hang on three white walls.

“When I came in here and actually started paying attention to them and reading them, I can honestly say I loved how so many different aspects of different cultures were woven together,” Williams said. “Because most of the time we just focus on the issues with American women.”

“I just feel like we’re backing down when it comes to women and their rights,” Williams said.

Georgia’s own strict abortion ban was lifted just last week. But a higher court could keep it — as happened when the Georgia Supreme Court reinstated the ban pending its future review — or lawmakers could revive it.

“It wasn’t that long ago that we were given the right to vote and do this and do that,” Lane said. “Even today’s women are still oppressed.”

Resnick said abortion is just one human rights issue that is presented visually in the exhibit. That’s on purpose.

“It has always been important to me to go beyond the borders of our country and to expand the thinking, especially among students, that they live in a global world,” said Resnick. “Women are discriminated against in almost every country in the world, including ours.”

And that, she said, is the common thread that connects the exhibition across millions of miles.