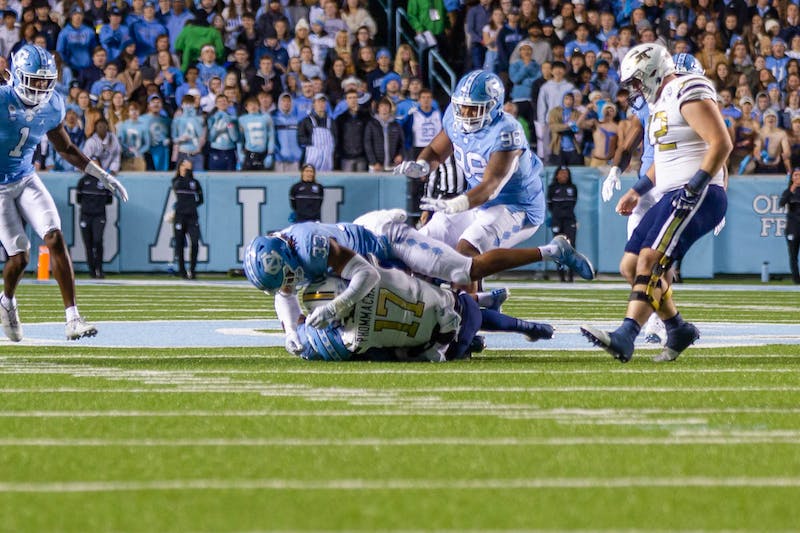 All week the North Carolina football team preached the dangers of underestimating an opponent.

It was necessary news for the Tar Heels, who had won six straight games and may have been tempted to look to future matchups against NC State and Clemson rather than focus on Georgia Tech.

But UNC still fell into the trap despite the preparation, losing to the Yellow Vests 21-17, being ruled out in the second half and giving up 21 unanswered points, showing what head coach Mack Brown felt was an “immature team”.

“I think what[Coach Brown]is referring to is that we kind of didn’t take them seriously and got a little overconfident,” junior linebacker Cedric Gray said. “All season we’ve been in tight games and we’ve won them. Everyone’s like, ‘Oh whatever, we’re just going to win’ and it caught up with us.”

But on Saturday, as the Tar Heels found themselves in their seventh game separated by a point, the North Carolina sideline thought they knew how it would end — with redshirt first-year quarterback Drake Maye the one led game-winning drive.

Unlike the previous six games, however, Maye couldn’t make it, ending with a season-low 202 passing yards and not scoring a touchdown for the first time all year.

“It starts with me. This offense starts with me,” Maye said. “It’s my job to get us on the field and get points and we didn’t do that tonight and it’s any Saturday in college football and I have my job to do.”

Still, the defense had several chances late in the fourth quarter to stop and put the ball back in Maye’s hands, which they had been able to do for most of the season.

However, her expectations came back to haunt her.

North Carolina had Georgia Tech on the ropes, with the Yellow Jackets 3-11 into the game from a third deficit. At the blitz, it seemed like UNC had Georgia Tech quarterback Zach Gibson in the backfield, but Gibson was able to offload it on running back Hassan Hall, who grabbed the first down.

Then again, after a false start penalty, the Yellow Jackets were nine yards from target and a little over two minutes on the clock a third behind, giving the Tar Heels ample time to turn possession and march down the field.

But again, the UNC defense overtook them and let Hall run past them to nullify the first tee shot, eventually allowing Georgia Tech to run out the rest of the clock.

“Sometimes we played the best defense we’ve played all year,” Brown said. “That’s the sad thing about not playing as a team. We haven’t played as a team all year. We played quarters, we don’t play games.”

The loss was only UNC’s second this year, but when Brown, Gray and Maye spoke, the tone of their voices spoke volumes – they knew they were letting the game slip away.

They knew there was no reason why they couldn’t have gone 3:13 in the first half after leading 17-0.

They knew it was unacceptable to concede 21 unanswered points to a team that had scored that many points in a full game just four times before this season.

Still, they have a game against a state rival and the ACC championship game in the next two weeks. Despite the stumble on Saturday, there’s still more football to play.

“This team, this school, has not often won nine games in their history,” Brown said. “These children have done incredible things.”

Sign up for our email newsletters to receive the day’s news and headlines in your inbox each morning.