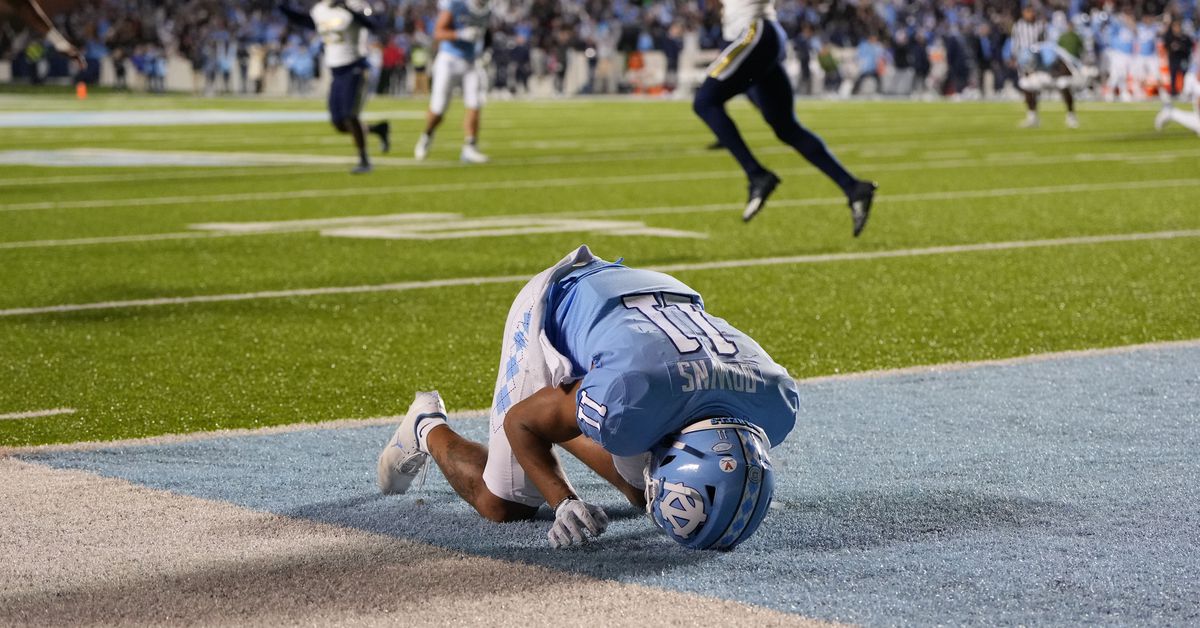 The benefit of letting things sit and not writing this post immediately after a game is that it gives you a chance to calm down and look at things objectively. Usually that means things aren’t as bad as you want them to be, or as good. They simmer the emotions and make sure you don’t say anything horrible about a bunch of 18-22 year olds getting beat up for your entertainment.

But man, I’m struggling to be objective about this loss at Georgia Tech.

First and foremost, Georgia Tech deserves all the credit in the world. It looked early on like they were ready to fold and leave it to the Tar Heels, and Carolina didn’t want to take it. Eventually, they figured things out, and a team with their third-rate quarterback and an interim coach easily won their biggest game of the season. They’ll likely be throttled next week by a Georgia team that hasn’t looked good since beating Tennessee, but somehow this team pulled off five wins in a season that looked lost.

There’s no other way to put it: Carolina lost a lot on Saturday night, and as confusing as it is, the blame lies with offense, not defense. So many things went wrong, and yet the Tar Heels still had several chances to take the lead late in the game. Some would say that after several games they should have lost, they should let one go, but there’s nothing wrong with getting upset about the missed opportunity.

Let’s get started right away, believe it or not, we have winners, lots of losers to do, another great #ACCRefs moment and other things to point out.

Elijah Green –Yes, he struggled a bit later in the game, but for someone who didn’t even show up on the running back depth chart, running for the longest touchdown of the season is remarkable. Green started the game with an 80-yard run from scrimmage and scored the only two touchdowns for the Tar Heels. He should have had three were it not for an ill-timed hold call that extended Carolina’s lead and gave him nearly 200 on the floor. He still has some flaws in him, but he’s earned a regular rotation spot going forward.

Cedrick Gray –Carolina’s defense was really good for the first 25 minutes of the game and arguably beyond. They gave the Tar Heels offense chance after chance, and somehow that offense only managed 17 points. The leading tackler was Gray, who got four solo tackles and 10 assists, and he was just a force for a linebacking corps that had serious work to do on a worn defensive line. I’ve said it before, but he at least deserves an All-ACC selection. Not only does he lead the team with tackles at 122, but he leads the entire conference and the runner-up (Ayinde Eley) is fifteen behind him. The Tar Heel closest to him in tackles is Power Echols at 88. He’s appeared in every single game of his UNC career, and he could turn pro after this season OR stay two more since his freshman year in 2020. He’s an anchor for the linebackers and deserves a lot of praise.

Ben Kiernan-I imagine most fans weren’t expecting to see the Dublin, Ireland senior as often as they did, but on a cold night in Kenan he did his job to at least push Georgia Tech back. Three of his five punts landed within the 20, he rolled a punt for a total of 60 yards, and the Yellow Jackets returned just one punt for a total of five yards. He’s another player who will have a COVID year if he chooses to, and the Tar Heels would be well served by him kicking again should he choose to do so.

A unique seasonalLet me get something straight before we mourn the lost. Thanks to the Tar Heels of last weekend’s Coastal, this team still has a chance to achieve things they will long remember: an 11-win season, an ACC Championship and a trip to the Orange Bowl. Those things aren’t common for Carolina Football, and if they can turn around and avenge what is arguably their worst loss of the last season this Friday, they’ll be forgiven a lot.

With that in mind, the chances of joining the discussion for the CFP and making a player a key Heisman contender are rare, especially in this age of four-team playoffs. Carolina lost every last chance at the CFP on Saturday and the game will be a pretty big blot on Drake Maye’s resume when he tries to make it to New York. The CFP is gone, but Maye’s Heisman campaign may not be complete. CJ Stroud had a little day walking in Maryland, and Hendon Hooker lost his game to South Carolina.

If Maye can learn from his mistakes and rally with good plays against strong defenses at NC State and Clemson, he’ll get back into the discussion and at least earn an invite. The sad part is his number should have been MUCH better but others on his team let him down. The problem is that Heisman voters won’t see Carolina play Georgia Tech, they’ll only see 16-30, 202, one interception, zero touchdowns. It’s up to Maye to show that this was an exception and not a rule.

coachingInstead of breaking it down to the sides of the ball, we just give it to the entire coaching staff for that one. The biggest and primary issue for this game was Phil Longo and offense as it seemed clear from the jump that the game plan that came in was to play not to lose. Maye barely ran the ball and instead held it for far too long, there were several times the ball was just passed and not blocked well at all, and there never seemed to be any sense of urgency that the team might lose.

Honestly, the biggest sign the offense wasn’t playing with the same killer instincts was the game’s lone interception for UNC. Storm duck made a great play to intercept the ball and start the offensive at the tech 39 yard line. The first game after that with the Tar Heels 10-0? A handoff to Omarion Hampton for four yards. Sudden changes are a perfect time to throw a pass and get a quick result and instead Longo blew the air out of the building with four runs in a row before finally attempting a pass in 3rd and 2nd place which was missed, and then a Drake Maye run under center. Five out of six games after an interception at +39 were runs, the tar heels couldn’t be converted and the wheels basically started to loosen. I could go on, but for me that drive was the biggest microcosm of the mindset that went into the game and that killed her.

The defense is not innocent of this loss either. Give them credit again for keeping Georgia Tech scoreless through the end of the second quarter, but when Georgia Tech rotates the quarterbacks and basically relies on their second, third, and fourth string boys and relies on gimmicks to moving the ball you have to make games to help your team. If you look at Tim Cross in particular, how can your defensive line not record a single sack against this Georgia Tech team? Several times the house was sent and not only did they not get to the quarterback, the pass was completed to the back, which was able to make a big win. Tech only passed 187 yards so the problem wasn’t the secondary one, but at the end of the game when you needed the team to make a 3rd and 4th and a 3rd and 9th stop you couldn’t. That’s right on the line of defense and another position to look at at the end of the year.

After all, Mack Brown cannot escape this discussion either. It’s well known that he’s a CEO coach and takes a broad stance towards his coordinators, but at this point it’s clear he needs to step in earlier when things just seem to be falling apart. Longo has earned a lot of doubts, but when things don’t go your way and you get just one touchdown on four trips into the red zone, something isn’t working and the head coach needs to step in there.

Recipient-Drop, drop, drop (everyone!). Nesbit, Downs and Jones struggled to hold on to the passes that were thrown their way. They feel awful for Downs, who was upset enough about having the leading score on his hands and just dropping it that he actually deleted his social media on Sunday. I’ll get this straight: The Tar Heels aren’t 9-2 unless Downs plays, and it’s been clear for the past few weeks that he’s well under 100% out there. The others must be better at bringing the passes that Maye sets up, and one wonders if that was a major reason Maye held the ball much longer than usual. Essentially, I was like, “These guys are open and the passes are coming, I just have to give them a chance.” In short, the main reason Maye’s Heisman campaign was a success was because his receivers aren’t making the games wanted and he had to force the ball more and more. Hopefully this was a one-game thing, otherwise this season could end ugly.

#ACCRef’s moment of the week

UNC fans will yell at the holding call to Nesbit, which negated Elijah Green’s second long touchdown run after replays made that look like a questionable call, but I’ll keep calling a catch and fumble for the second week in a row . In the third quarter, Drake Maye found an open Nesbit just about unable to come up with the catch. However, instead of being incomplete, the officer threw the beanbag, Tech got on it and ran almost all the way back.

We all had to waste time while the officials got under the hood for a game where the last thing it could have been was a catch and a fumble. The game was so instant that there was no chance Nesbit would have made a soccer move. The only thing that should have been checked was whether it was a catch or not. On the replay, even if you consider he did a football move, his knee was down before the ball came loose. If you say it was a catch and fumble, the game should have ended there. I’m not going to argue about the ultimate outcome of an incomplete pass, but why is it so hard that you decide a catch and fumble?

Bryson Nesbit was the least likely leader in receptions, getting four for 85 yards. Without Anton Green on the field, someone else needs to emerge as a deeper threat and Nesbit tried, but he also had a few premature drops…Storm duck found his groove here late in the season. He sneaks to the top of the ACC leaderboard with four interceptions, nabbing the only one for the tar heels on Saturday. Just having someone reliable in that secondary is a huge help and Georgia Tech clearly learned their lesson as they really didn’t pass deep after that game.

The Tar Heels have a brief turnaround as a struggling NC State team looking to save their season with a win against the Tar Heels comes to Chapel Hill on Friday. Did they get all the mistakes out of them this weekend to play a solid game against the Wolf Pack? We will see. In the meantime, enjoy your Thanksgiving!