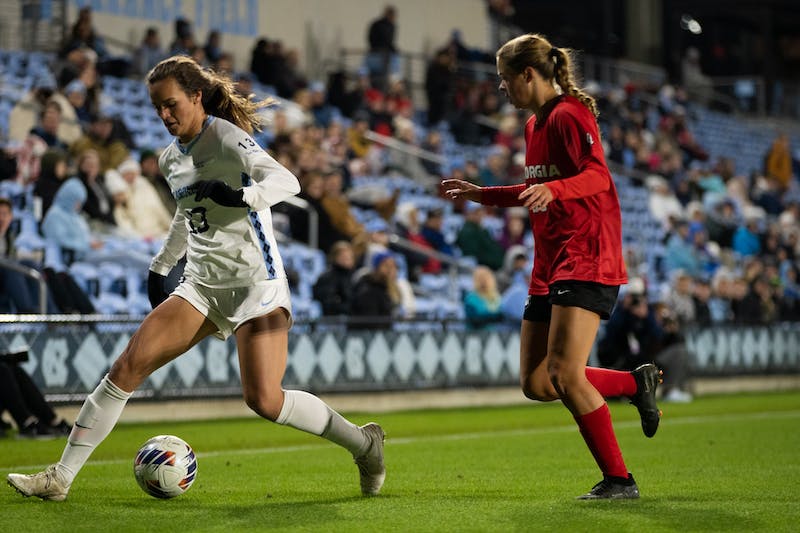 After a 3-1 win over Georgia in the second round of the NCAA tournament, UNC women’s soccer head coach Anson Dorrance said his program must “find a way to win national championships again.”

The longtime head coach, who has won 20 NCAA championships with UNC, the last of which was in 2012, plays on renewed form Friday and thinks he’s found the answer.

UNC have relied on a 4-3-3 formation all season, a standard structure that balances the defensive strength of a four-man back line and the explosive potential of a three-man attacking group. It was effective for the most part, but Dorrance said he felt he wanted to create more scoring chances for his team, especially given UNC’s stagnant offense in the ACC tournament.

Against the Bulldogs, the Heels introduced a 3-5-2, a more modern formation defined by their three-man defensive line and two roving full-backs who have the flexibility to move upfield and advance offense or retreat on defense .

“It gives us the opportunity to have a lot of people in attack space,” Dorrance said. “If you think about it, the two front runners can pin a (four-man defence) back so now we have numbers in midfield. If their four backs match my two forwards then we’ll have the numbers.”

The numbers game paid off for the Tar Heels, who were more easily able to build possession and get the ball to their most dangerous weapons. At the start of the second half, UNC took a 3-0 lead, the biggest deficit Georgia had all season.

Two of those goals came from Ally Sentnor, a redshirt freshman, who picked up her second brace in as many games. Sentnor brought UNC on the board in the 23rd minute with an impressive goal without an assist. At the top of the penalty arc, the first-team All-ACC forward spun past their defender, sidestepped another and put the ball into the bottom left corner of the goal. Thirty-four minutes later, Sentnor daggered a through ball from Isabel Cox.

“I’m really proud of us because we didn’t really practice much (the 3-5-2) and everyone came out with a really great attitude and we really held onto the formation,” said Sentnor. “And I think it really worked. We used every player and people unselfishly pushed at each other to help us score a goal.”

“I saw Avery run in and just knew she slipped it to me (once), I was wide open,” DellaPeruta said. “Avery played a perfectly weighted pass that I got my right foot on once and I was ready for that shot. And I was just so happy walking in.”

UNC’s offense saw a marked revival early in the tournament, although their opponents weren’t quite on par with the top ACC programs the Tar Heels faced that year. UNC will have its biggest test yet Saturday morning when the team takes on the sixth-ranked BYU Cougars at 11:30 a.m. at Dorrance Field

The Cougars beat three-seed Stanford on penalties just before the UNC-Georgia game and are in a hot streak after going unbeaten in the West Coast Conference game. However, the teams are familiar – UNC defeated BYU 2-0 in an exhibition game before the start of the season.

Dorrance said BYU can beat his opponents from dribbling and close his scoring chances from long range, plus his players don’t get tired easily. The Cougars are exactly the kind of challenge UNC considered when implementing their new formation.

Sign up for our email newsletters to receive the day’s news and headlines in your inbox each morning.