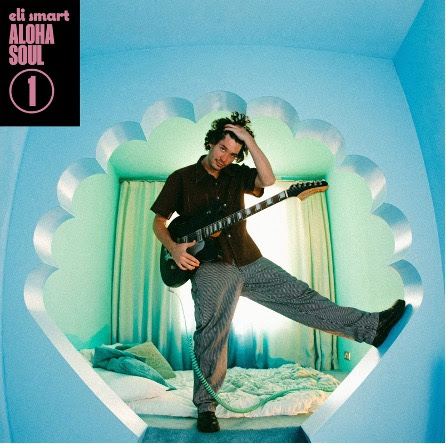 In Hawaiian culture there is the expression kani ka pila – the invitation to jam together in your own garden. Its essence is rooted in the Hawaiian spirit itself: the way music and its easy sense of community are irrevocably linked. There might be two or three guitars, a few scattered ukuleles, a homemade Pakini bass, and someone on spoons to keep the rhythm—an impromptu, free-form mix of instruments well into the wee hours. That’s the energy that Hawaiian-born singer-songwriter Eli Smart seeks to capture in his sophomore EP, Aloha Soul.

“It was an odd combination of escaping through music and hopefully addressing some shit in the process.” Eli explains from the EP. He turned his childhood bedroom into a studio and invited Mercury Award-winning producer Gianluca Buccellati (Arlo Parks, Lana Del Rey, Biig Piig) to help bring these five sketches to life – the first time he’s ever done one professional had worked together. In a floating reality, they fell into a sleepy, blissful routine of waking up, heading to a friend’s bakery (where Eli has a bagel named after him), and starting writing songs together. The only interruptions would be interludes to jump in the water and surf, Eli’s twin passions: another way to escape from the lethargic, circular rhythms of everyday life.

Together, Eli and Gianluca would combine today’s technology with an analogue mentality. They weren’t interested in producing flawless sounds, but rather chased the worn crackles, the whims of an instrument, the rasp of Eli’s voice. It gives his music a quality that is absolutely timeless, committed to no epoch and yet reminiscent of all. Between rhythmic guitar and sugar-coated melodies, owing much to Eli’s worship of the Beatles, you’ll also hear the sounds of Hawaii itself: falsetto harmonies, lap steel guitars, slide guitars and ukulele.

Recent single ‘See Through’, championed by NME, consists entirely of seedy guitar solos and Eli’s now signature falsetto, underpinned by an irresistibly jarring rhythm section that transports you straight to memories of sunshine.

Also appearing on the EP were two beautiful singles “AM to PM” and “B-Side” which were quickly adopted by Jack Saunders & Gilles Peterson. Recent single ‘Cry At The Comedy’, a gritty surf-pop anthem, was a mainstay on BBC Radio 1 late night, with Clara Amfo drawing heavy support across the network.