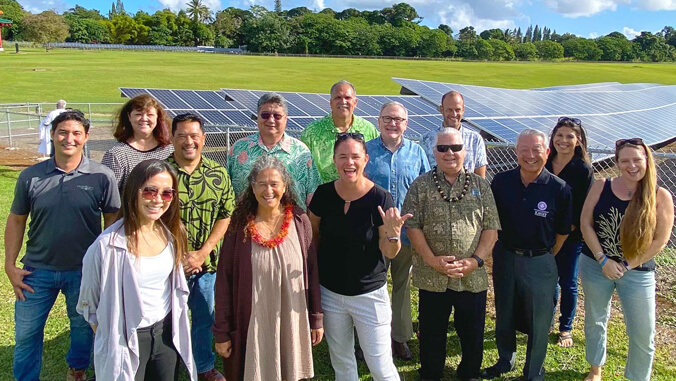 Kauai The community college recently celebrated the inauguration of a new photovoltaic system on its campus. The solar panel system built by Greenpath Technologies is part of the University of hawaii continued commitment to increasing energy efficiency across its 10 sites and reaching the goal of net zero energy by 2035.

“We have gathered to see the completion of the photovoltaic system, the realization of the AH direction to integrate renewable energy systems onto our campus and to recognize the efforts of so many people to make this project a reality,” he said Joseph Daisy, Kauai CC Chancellor. “The College remains grateful for the continued support of our officers and our business and community members for the important work the College is doing in partnership and service Kauai.”

The initial investment of US$2 million for the project was provided by the Hawaii State Legislature in 2019, and groundbreaking was in May of that year.

“We are excited about this investment to ensure our campuses generate renewable energy and meet our sustainability goals,” he said Michael Unebasami, AH Community Colleges Associate Vice President for Administrative Affairs. “We would like to thank the Hawaii state legislature and Hawaii Senate President Ron Kouchi for their support and providing the seed funding for this important project.”

That PV The system, which took four years to complete, is already bringing energy cost savings to the campus.

“Since July 2022 the PV The system has resulted in a 30% reduction in electricity bills, or a reduction in electricity bills of approximately $20,000 per month,” the company said Kauai CC building superintendent Patrick Watase.”A better savings barometer is determined from at least one year of data. PV Production falls due to shorter daylight hours and cloudy weather conditions in the winter months, so demand will increase. We currently turn on the outdoor lights around 5:45pm, compared to 7:30pm in the summer months.”

AH strives to be a leader in renewable energy and has a goal of becoming net zero, or producing as much energy as it uses, by 2035 and exceeding and fully supporting government targets by 2045 To be 100% renewable. The university The first rooftop system was installed in 2009 at the AH Hilo campus. It is PV Systems include: rooftop installations, park shading structures, and ground mounted arrays. These projects are built through a portfolio of funding sources including capital raisings and power purchase agreements.