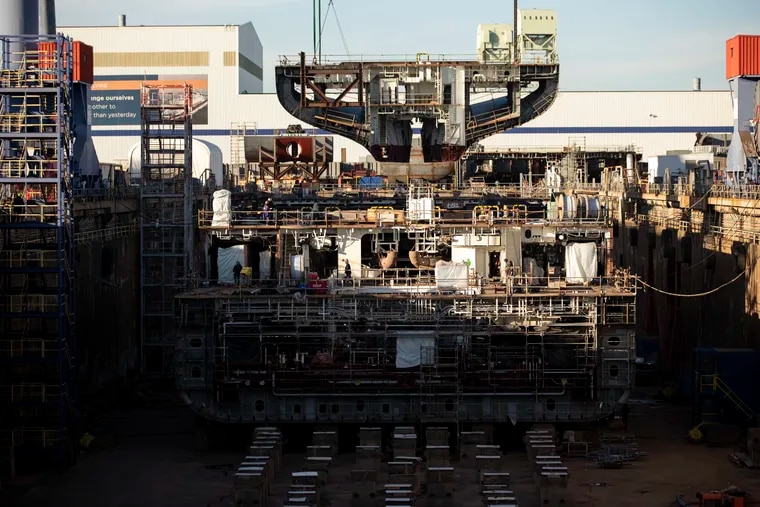 The headlines these days are grim. Tech companies are laying off workers by the thousands. Cryptocurrency melts. Energy prices have risen. Interest rates continue to rise.

But there is no sign of a recession at Philly Shipyard Inc., which this month announced it had signed a $1 billion contract to build three new container ships for a Hawaiian shipping company. The former Navy shipyard, which four years ago had an empty order book and laid off most of its workforce, is now lined up with work until 2027.

“I see a lot of companies looking to the future with some hesitation,” said Steinar Nerbovik, managing director of the shipyard, whose majority shareholder is Norwegian holding company Aker ASA. “But I’m very optimistic. Good days are ahead of us. smiling faces. People know what they have to do in the next five years.”

» READ MORE: 2018 recap: Philly Shipyard’s future is in jeopardy due to lack of orders

“When a shipowner comes back to you and signs a new contract at your shipyard, you know you’ve done a great job,” said Nerbovik, a Norwegian who has spent his life building ships. “That’s why we’re very proud of the relationship we have with Matson.” The three new ships, due for delivery in 2026 and 2027, can use liquefied natural gas as fuel, which produces fewer pollutants than diesel and Matson will help improve its achieve emission reduction targets.

The Matson order comes after the shipyard secured contracts to build five US naval academy training vessels beginning in 2020, the first of which was launched in September and will be delivered this winter. This $1.5 billion five-vessel order is followed by a contract to build a specialty vessel for the offshore wind industry, a growing new opportunity for domestic shipbuilders.

The full order book is a stark reversal from 2018 and 2019, when business dried up and Nerbovik laid off most of the shipyard’s workforce. It began taking on repair jobs, which are not as lucrative as new construction. With the new orders, there are now 1,400 employees again, including 300 new hires this year. Nerbovik would like to hire a few hundred more.

“I’d like 200 more locals yesterday if you could go out and find them for me,” he said. “Give me 200 experienced people or even amateurs as long as they have the right attitude and I can make them ship builders.”

On a recent tour of the shipyard, Nerbovik greeted workers amid a shower of sparks from welders assembling massive steel plates that will form the ship’s hull. “Today is a great day for shipbuilders,” said Lily Lawrence, 24, of Drexel Hill, who is a freshman in a three-year shipyard apprenticeship.

Shipbuilding has always been a cyclical business, but it has been particularly difficult for US shipyards, whose high labor costs cannot compete with the giant companies in South Korea and China that build large, assembly-line ships for the international market.

But Philly Shipyard and several other domestic shipbuilders have a lock on the narrower market for manufacturing large ocean-going vessels that comply with the Jones Act, named for the merchant shipping protectionist measure of 1920 that required cargo shipped between US ports , sails on American-made ships, crewed by US crews. The Jones Act market is largely limited to vessels trading between the US mainland and Hawaii, Alaska, Puerto Rico and Guam.

Since Philly Shipyard was converted into a private company in 1997 – as a Navy shipyard it produced military ships until the 1970s – its business has focused primarily on oil tankers and container ships for the domestic cargo trade. The private shipbuilding company was managed by Kvaerner, Aker’s predecessor.

Orders for new ships dried up until 2019, when the post-Jones Act cargo ship market was saturated. The downturn prompted the shipyard’s owners to explore other markets to diversify, including non-combat-ready vessels for the US government as well as vessels for the offshore wind industry, which requires some unorthodox watercraft to haul 800-foot-tall turbines to the seabed erect.

The journey to a more diverse order book hasn’t always been smooth.

In 2018, Philly Shipyard partnered with two other shipbuilders to bid for the US Coast Guard’s next-generation heavy polar icebreaker. The Philly Shipyard consortium hired union leaders and politicians to press the Coast Guard for the job, but the work was awarded to VT Halter Marine of Pascagoula, Mississippi, in 2019 for $746 million.

But VT Halter is struggling to meet cost targets and has yet to complete the icebreaker. The troubled shipbuilder was sold last week for a symbolic $15 million to Louisiana-based Bollinger Shipyards, who will take over the Coast Guard’s contract.

“I’m doing very well with the order book I have today,” said Nerbovik. “I don’t need icebreakers to be successful.”

Another federal agency knocked on the shipyard’s door in early 2020 when the US Maritime Administration, which supports the merchant marine, awarded Philly Shipyard a $630 million contract to build two vessels to be designated National Security Multi-Mission Vessels or NSMVs are known. The contract will be managed by TOTE Services LLC under a congressional mandate to use commercial design-build practices to keep costs under control.

The 525-foot vessels serve primarily as floating training academies for cadets entering the merchant marine. But the ships are also designed for use in disaster relief and can accommodate up to 1,000 people in a humanitarian emergency – they are equipped with a helipad, hospital facilities and roll-on-roll-off capabilities to transport vehicles or containers into one Catastrophe. The original two-ship contract has been expanded to a total of five ships for approximately $1.5 billion.

“Having this runway with work is really important to the effort to rebuild the entire ecosystem at the shipyard,” said U.S. Rep. Mary Gay Scanlon, a Democrat whose district the shipyard is in. She took office in 2018 and visited the shipyard for the first time that year, but was met by a dejected workforce who soon went to the employment office.

Scanlon was among several political and union leaders urging the government to get this done NSMV Contract with the Philly Shipyard. “So often you don’t see any progress in governments,” she said. “But this is an area where we have seen great progress in the four years that I have been in office. And it is exciting to see how things are progressing.”

The first ship to be built under the contract, Empire State VII, was launched in September and will undergo final testing and fitting out before entering service this winter. A second NSMV is being assembled in a dry dock. The steel sheets for the third ship will be cut, formed and welded in the shipyard’s cavernous assembly plants.

The training ships are unlike anything the shipyard has produced in recent decades. They include classrooms and living quarters for 600 cadets. Building the cabins, which look like dormitories, required Philly Shipyard to develop skills more closely related to cruise ship construction. She builds the individual crew cabins, each fitted with bunks and showers, which are then assembled into multi-story sections that are fixed as a unit on the ship’s deck.

Nerbovik compares building a ship to a giant Lego assembly. Each component of the ship is designed to fit neatly into the next – all plumbing, wiring and ventilation systems are designed to fit with the adjacent modules. The ship will be assembled from 36 huge sections of hull and upper deck sections, each of which will be carefully lowered into place by a 600 tonne crane while the ship takes shape in a dry dock.

Meanwhile, before the government’s fifth training ship is completed in 2026, the yard will build a new vessel for the offshore wind industry as it grows to pursue the Biden administration’s goal of 30 gigawatts of offshore wind power by 2030 to install, enough to supply electricity to an estimated 10 million homes.

The shipyard signed a $197 million contract with Great Lakes Dredge & Dock Corp a year ago. to build a “rock installation ship” that does exactly what its name suggests: the ship’s sole purpose is to transport huge loads of rocks that slide down a downcomer or chute to the seabed to provide a stable foundation for offshore wind turbines to build. The 461-foot vessel can carry 20,000 tons of rock, which is the capacity of about 200 rail cars.

“I didn’t even know there was such a thing as a rock installation ship,” Nerbovik said.

The rock ship is scheduled for delivery at the end of 2024. The agreement allows the owner to order a second vessel for delivery in 2025, according to MarineLog, a trade publication.

The shipyard is busy signing further contracts for Jones Act compliant vessels for the offshore wind industry. Designing and ordering ships is like piloting a ship, literally – it takes a long time.

“We are talking to potential new owners because we need to sell something in two years in order to be able to deliver that in five years,” Nerbovik said. “So we can’t sit back and relax. We have to look ahead.”