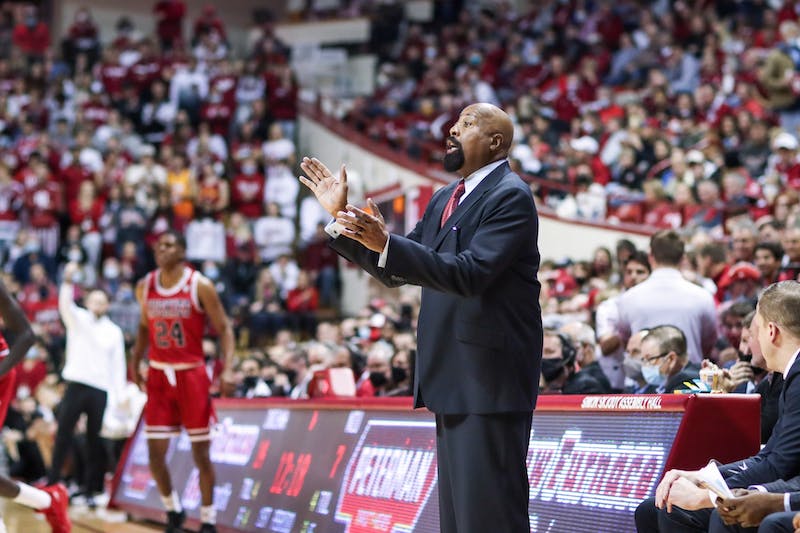 INDIANAPOLIS — Less than 48 hours after their hard-fought 81-79 road win over Xavier University, Indiana men’s basketball could easily have sleepwalked into their matchup against Miami University. For about five minutes that seemed to be the case.

As you might have guessed, the following 35 minutes of the Hoosiers’ 86-56 win over the Redhawks were a little different.

Early on, Indiana struggled to score, blasting errant 3-pointers or unlucky layups into a pile of Miami defenders. The Hoosiers had worse shot selection than a 21-year-old who repeatedly ordered Jagermeister for their first night. In the end everything was fine, but nothing went particularly smoothly.

Then freshman guard Jalen Hood-Schifino knocked down a 3-pointer to give Indiana a 14-12 lead. Then second guard Tamar Bates did the same. The Hoosiers outscored the Redhawks 32-14 to end the first half and quickly cleared any lingering doubts.

Hood-Schifino bounced back from a stunning game against Xavier where he picked up just three points in 29 minutes. He endured another tough start against Miami, firing in his first five minutes on court 0-4. After the fourth miss, my roommate texted me, “Why can’t Jalen score?”

“Is he cursed?” he asked. “Did someone curse him?”

Obviously, Hood-Schifino shrugged off whatever black magic was plaguing him and ended the night with 12 points. He may need a few more minutes before he can reliably threaten Big Ten opponents, but the potential is there.

Hood-Schifino was Indiana’s second-best scorer, right behind — you’ll never believe it — senior forward Trayce Jackson-Davis, who had 17 points and a ridiculous 16 rebounds.

Even with a wealth of young talent and experience around him, Jackson-Davis continues to drive Hoosier at both ends of the arena. When defenders in the color are drawn to him, they leave openers like Bates or forward Miller Kopp open on the perimeter.

As a result, Indiana played a much more even game than they did against Xavier on Friday, when Jackson-Davis and guard Xavier Johnson accounted for 65% of the Hoosiers’ points. Against Miami, four Hoosiers scored in double figures, while student forward Race Thompson and junior Jordan Geronimo put on a stunning defensive display.

Aside from the ugly start, there really wasn’t much to complain about. It’s not like I’m paid to write only positive things about Indiana – that is, iuhoosiers.com, you know where to find me if you hire me – but any criticism feels good given the 30 point head start of victory like a reach.

However, head coach Mike Woodson didn’t seem quite as happy as the home crowd throughout the evening.

With his Hoosiers a 20-point lead midway through the second half, Woodson was still yelling at them to keep their hands on defense and watch for cuts at the low post. At one point, as Indiana gave up a 3-point shot, Woodson put his hands to his forehead and shouted, “Why, why,” like an overly enthusiastic stage actor performing his first Shakespearean monologue.

In other words, the Hoosiers’ harshest critic is definitely not the columnist who says they didn’t do the smartest recordings for a few minutes. Perhaps it’s the coach who yelled at senior walk-on guard Michael Shipp to stick his jersey in the second as he stepped onto the court during a 30-point blowout.

To be fair, the jersey was fully open.

Assuming Jackson-Davis continues to play at his usual level, the freshmen continue to improve, and Woodson takes every game as seriously as this blowout against a Midwest Athletic Conference school, Indiana should build plenty of momentum before going into the schedule .

Sure, the Hoosiers initially looked a bit hungover from Friday night’s excitement. But soon they rallied and, without embarrassing themselves, achieved victory.