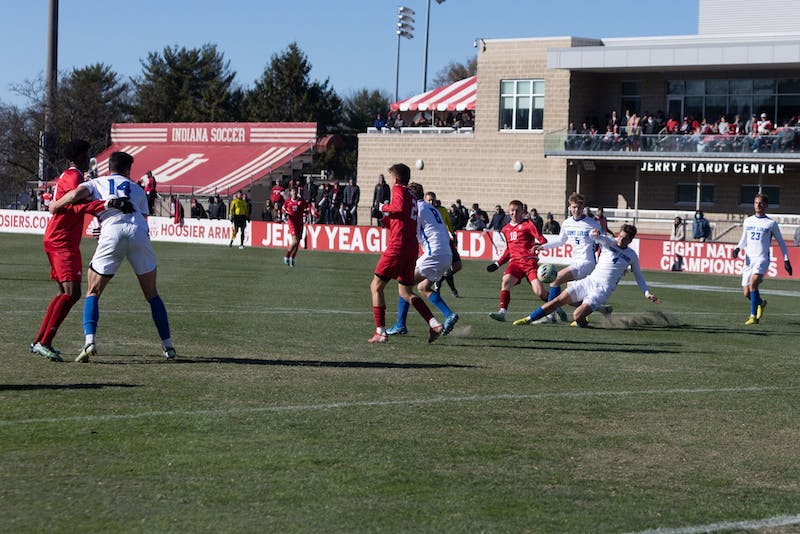 For much of Sunday’s second round of NCAA tournament play, Indiana men’s possession felt pointless against Saint Louis University.

The Billikens thwarted most of the Hoosiers’ attempts to move the ball forward, leading to audible frustration shared by head coach Todd Yeagley and the crammed fans seated around a bitterly cold Bill Armstrong Stadium. Not many signs pointed to a shift in the goalless impasse.

Despite not making his usual number of touches in the second half, senior striker Ryan Wittenbrink knew what to do when space opened up for him on the far left wing in the 75th minute.

The Big Ten Offensive Player of the Year fearlessly dribbles the ball at his helpless defender, hits his right foot and – blackout.

When he awoke from his euphoria, Wittenbrink was in the final steps of his celebratory run to the south stands. He had just put in Indiana’s opening and eventual winner into the backmost pocket of the bottom right net.

As the relieved fans, who donned cream and red, clapped and roared in front of him, Wittenbrink broke his run with a few penguin-like waddling movements. It’s a celebration he resorts to after several of his nine goals in total this season.

“Once he tunes in, it’s exciting,” Yeagley said. “You can’t solve both (inside and outside runs), so you have to take something away. Witt did so well reading the defense, seeing the second defender and his movement.

No. 13 Indiana’s 1-0 win over Saint Louis as a result of a timely goal from Wittenbrink means they advance to their eighth straight Sweet 16.

“This has been the toughest game for our program to date,” Yeagley said of past NCAA tournament disappointments. “Really reserved in the first or second round.”

The Hoosiers’ magic tally is down to four wins in their quest for a ninth star, and that wouldn’t be the case without their magician in attack.

Although the Billikens’ 4-4-2 form and aggressive man marking meant he wasn’t often involved in build-up work or constantly threatening, Wittenbrink’s short memory and calm demeanor made the difference in the later stages.

“They collapsed well and got the lines really tight,” Yeagley said. “Witt didn’t have a lot of space to walk towards the defenders who were blocking those spaces. You can’t try to make a game you’re not ready for and I thought Witt did a good job of not overdoing it because he hadn’t touched the ball that many times.

At the start of the season, many questions were asked about who would step up in former striker Victor Bezerra’s shoes. Even if the results were positive for the Hoosiers, the goalscoring burden was not entirely concentrated on Wittenbrink.

Wittenbrink’s growth and talent were evident in the early games but he has gained the confidence and ability to take over games completely – at the best possible time for his team.

He has now accumulated 26 points this season and has scored or assisted in each of Indiana’s last six games. These include a free-kick goal in the regular-season final against Maryland, the game-winner against Penn State in the Big Ten quarterfinals, and assists in both the semifinals and finals—all hugely significant games.

His efforts turned Indiana’s uncertain postseason opportunities into a top-16 start, and now the Hoosiers are one of the last 16 teams nationwide still fighting for a national championship.

“I can attribute a large part of my success to the fact that my team-mates put me in good positions,” said Wittenbrink. “It’s been a fun season.”

Wittenbrink’s path to taking on such a big role for Indiana began much like many others who have dedicated themselves to the historical program: on the sidelines, in the shadows.

Yeagley said most recruits won’t see much or any playing time in their first two seasons, and they know what they need to improve on to earn top-class opportunities. In Wittenbrink’s case, Yeagley knew what could become of the striker if he put in the effort, citing Wittenbrink’s ability to hit the ball differently than most American candidates.

“To see a fifth grader step up and play a really mature game and make the crucial game is awesome,” Yeagley said. “That’s just a good example. There’s going to be another guy in the locker room who’s in that boat right now, is a redshirt, or hasn’t played much. There is a window.”

Others will certainly get their chances at some point, but for now, Wittenbrink is leading in his final season with the Hoosiers. He has proven that he can single-handedly help Indiana find a way to survive and thrive. The program may have thought it had lost an irreplaceable game changer up front in Bezerra, but Wittenbrink is playing at that level.

“It’s all been pretty easy for Ryan so far,” Yeagley said. “He rose to the challenge. It pushed him, made him uncomfortable and grew from it.”

Wittenbrink and Indiana will get another home game for the Sweet Sixteen after Marshall University upset the 4th-seeded University of Virginia in Sunday’s penalty shootout. The Hoosiers and Thundering Herd meet in a replay of the Spring 2021 National Championship game on November 27 at 6:30 p.m. in Bloomington.

Support the Indiana Daily Student to beat Purdue’s student newspaper, The Exponent, by donating to the IDS Legacy Fund! Whichever publication raises more money ahead of the Nov. 26 Purdue-IU football game “wins” the challenge, but all donations go to supporting student journalism at their respective publications. To help IU beat Purdue and support the IDS, follow this link to donate.