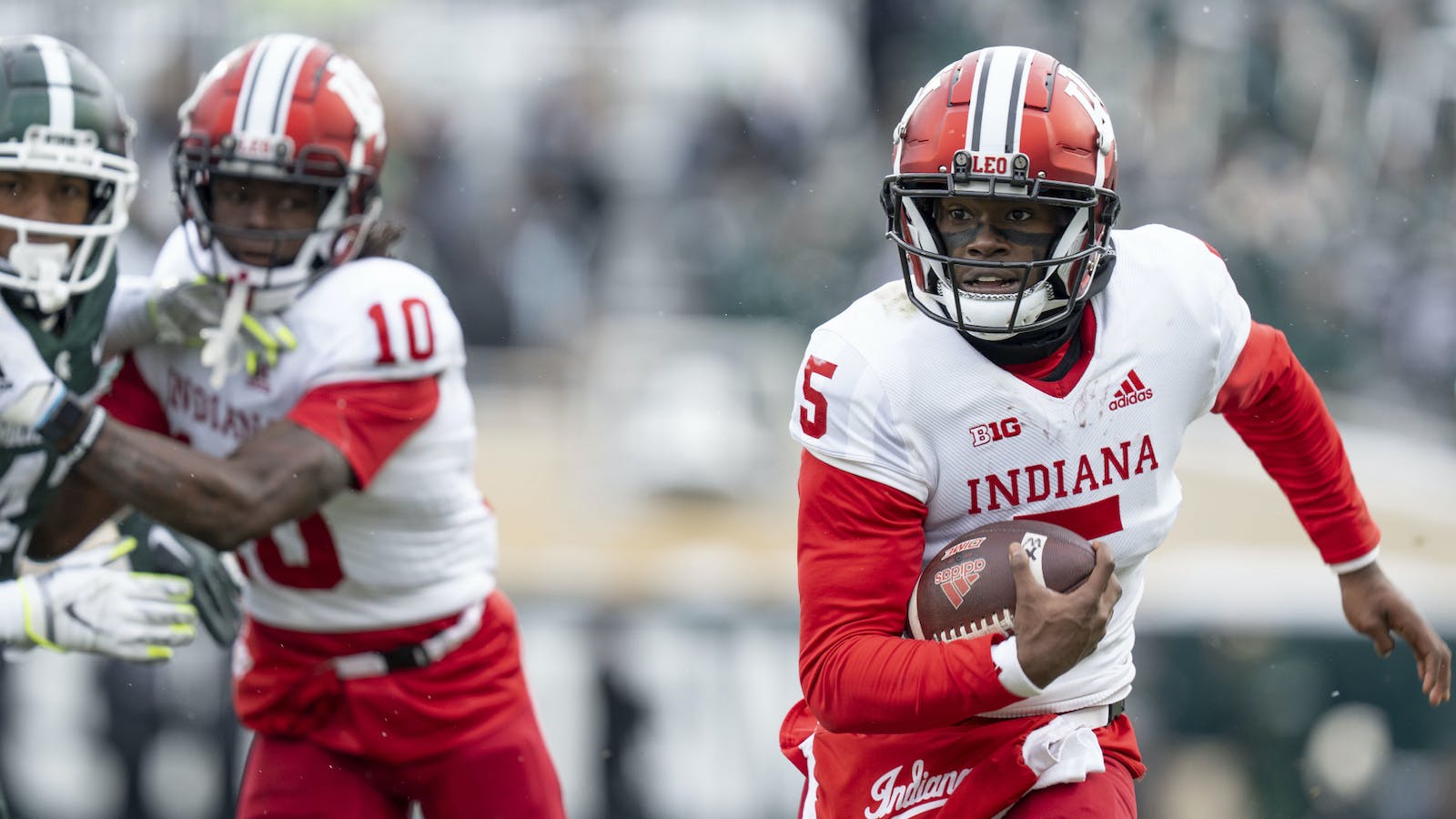 Leading 24-7 at halftime, Michigan State succumbed to a furious second-half rally at the hands of the visiting Indiana Hoosiers.

In a 31-31 tie, the Spartans had a chance to win the game with a chip-shot field goal on the five with 0:02 left, but a miss by junior kicker Ben Patton sent the game over end over time. Both field goal attempts in the first overtime were blocked, but ultimately Indiana’s touchdown in double overtime proved to be the last nail in the coffin.

Special teams units were abysmal for Michigan State, missing multiple field goals and allowing a kick return for a touchdown in the second half.

While the scoreboard might indicate a poor performance from the Spartans’ defense, the unit actually did not have a terrible afternoon. Turnovers, special team miscues, and chunk plays kept the Hoosiers alive. Indiana threw a ridiculously low 31 yards through the air, though the 257 rushing yards were just enough to keep the game within reach.

After an impressive first half, Michigan State’s offense was choppy at best in the second. Redshirt junior quarterback Payton Thorne threw for 298 yards, two touchdowns and an interception. Sophomore receiver Keon Coleman was the favorite target throughout the game, rushing for 107 yards and a touchdown on eight receptions.

After giving up a touchdown on the night’s first drive, the Spartans caved in and dominated on both sides of the ball in the first half.

The defense forced several three-and-outs and repeatedly gave the offensive a prime field position. Each time, MSU conceded that solid starting position and drove down the field with a good mix of passing and haste. The Spartans’ punting unit didn’t see the field for the first 30 minutes — the offensive’s only faltering drive was a missed fourth down conversion near midfield.

Indiana’s lone touchdown in the first half came from a quarterback keeper when Dexter Williams II hung up on a 34-yard touchdown run in the opening minutes of the game.

Michigan State’s offense responded with a 73-yard drive, with the passing attack really fueling the series. A flea flick left Coleman wide open for a 39-yard reception on the very first play. Coleman also made an important catch in third and eighth to keep the ride alive.

Inside the two-yard line, however, MSU’s offense stalled thanks to a few meager rush attempts and a failed play-action pass. Patton kicked a 19-yard field goal to reduce the deficit to 7-3.

After a drive from Indiana that faltered in midfield, Michigan State’s offense got underway at 10. Faced with a fourth and 1 after scoring some first downs, the Spartans opted for a pitch play that resulted in a loss of yards and led a turnover on downs.

However, MSU’s defense stood upright after the turnover, forcing a quick three-and-out. A terrible punt from Indiana gave the Spartans an offensive start at the MSU 36-yard line.

Michigan State’s running game eventually had some success on the ensuing drive, highlighted by a 29-yard run from Redshirt sophomore running back Jalen Berger. The Spartans ended the drive with a five-yard touchdown catch from second-year redshirt tightend Maliq Carr. A pass intended for redshirt senior running back Elijah Collins in the flats slipped through his hands, tumbled through the air and found a wide-open carr in the end zone.

Indiana’s offense went nowhere on the next drive. Another bad punt brought MSU’s offense to their own 31-yard line. Marching right down the field, Michigan State flipped field position thanks to another impressive run from Berger. Collins potted him on the goal line to extend the Spartans’ lead to 17-7.

The defense forced another three-and-out, and a nice punt return from senior wide receiver Jayden Reed put Michigan State at the Hoosiers’ 39-yard line. The Spartans made Indiana pay for the special teams’ poor play and capped off a quick drive with a two-yard touchdown reception from Coleman.

The second half started similar to the first. Indiana found the end zone first, this time on a 79-yard touchdown by Shaun Shivers. But again, much like the first time, Michigan State responded with a solid drive of its own. After the defense forced another three-and-out, MSU’s Collins scored his second touchdown of the afternoon with a rumbling 31-yard rush.

However, the Hoosiers refused to go down without a fight. Right after Collins’ second touchdown, Indiana responded with an 88-yard touchdown on a kick return to put the game to 10 points.

Indiana always found ways to hang out. On Michigan State’s first drive after the kick return, a deflected pass from Thorne was intercepted, establishing the Hoosiers’ offense deep in Spartan territory.

But again, MSU’s defense held strong when it mattered most. Indiana’s offense failed to get a first down and the visitors opted for a field goal, reducing the lead to seven.

After scoring just a first down, Michigan State sent the ball straight back on Indiana’s offense. The Hoosiers marched down the field, thanks in large part to Williams’ mobility, eventually smashing them in at the goal line to level the score at 31-31.

Michigan State put together a promising drive after Indiana’s touchdown. After a couple of first downs put the offense in the Hoosiers’ 30, MSU turned the ball over on a missed deep pass to fourth and second on downs.

With possession just outside the red zone and less than two minutes into the game, Michigan State had a chance to walk away with a win. A clutch catch from Carr in fourth and second kept the drive alive, and a couple of effective runs from Collins put MSU inside the five-yard line.

However, Patton missed the chip shot field goal and sent the game into overtime.

On the first possession of overtime, Michigan State managed just a first down before settling for the field goal. After a high snap, Patton’s kick was blocked and all Indiana needed was a field goal to win it.

After a few first downs, it seemed like it was all over for Michigan State. However, the Hoosier’s attempt was blocked, sending the game into double overtime.

Indiana opened the scoring in double overtime to go 39-31 on a two-point conversion. Michigan State didn’t respond and Indiana walked away with the win.