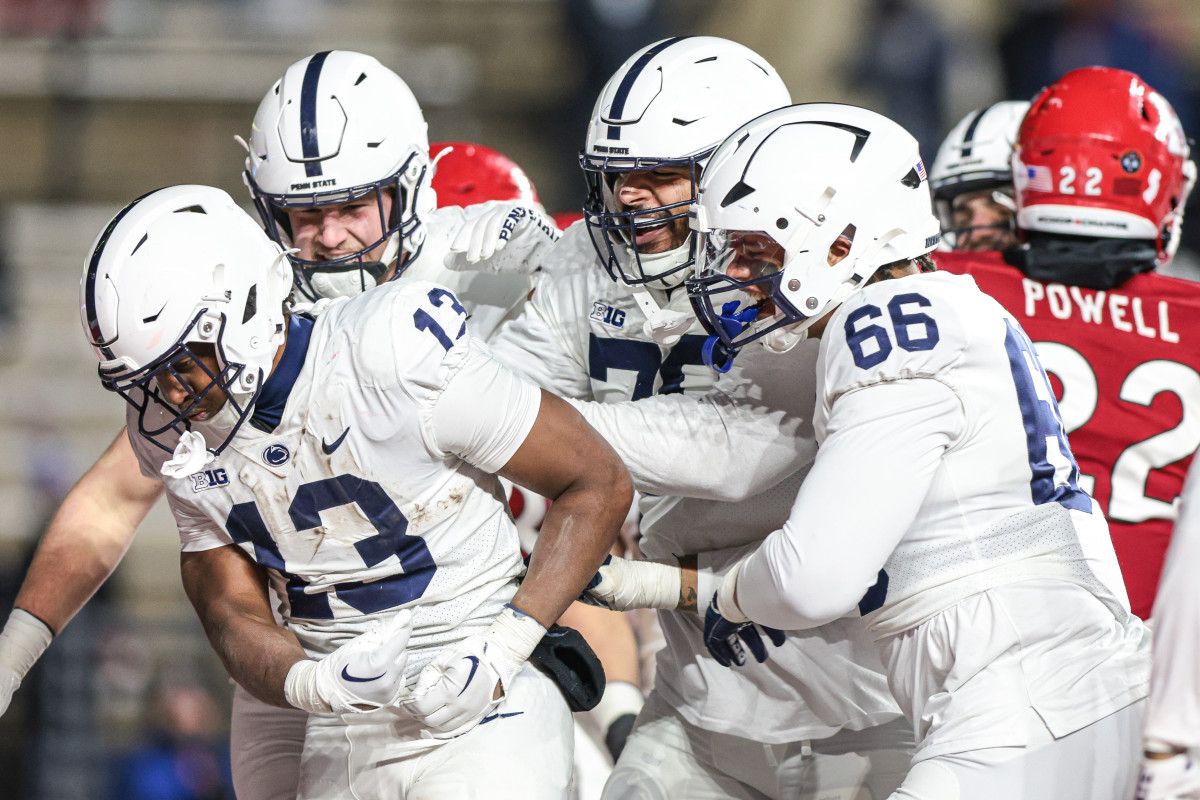 Five of the seven games were decided by possession. Michigan needed a questionable late call to beat Illinois 19-17. Indiana beat Michigan State, an 11-point favorite, in overtime. Maryland trailed Ohio State by 6 points in the final minute before sealing the win with a defensive touchdown.

Meanwhile, No. 11 Penn State scored 48 unanswered points to get past Rutgers 55-10. As it should be.

On a day when six Big Ten teams were double-digit favorites, only one walked away with a win. It’s about turning expectation into action, which the Lions (9-2) have been doing for the last three weeks. They passed Indiana, Maryland and Rutgers by an average of 35.3 points.

Coach James Franklin said the team was “getting better” and it showed on Saturday at SHI Stadium despite some (now expected) offensive flaws.

With that, the Penn State Rutgers testimony.

Playing without another key starter (newly injured receiver Parker Washington), the Lions worked early. Sean Clifford got some protections wrong, the running game really struggled (14 yards in the first quarter) and Penn State poked at their first four possessions. Then Clifford scored against Tyler Warren with a well thought out red zone play and the dam burst.

Kaytron Allen (11 carries, 117 yards) continues to bulldoze defenders, showing a new level of deviousness, and Nicholas Singleton added an unsung 62 yards. Clifford (17-for-26, 157 yards) threw his usual play but rushed for a touchdown. After the game he wanted a picture of it.

Let’s skip the bean counting: Rutgers surprised Penn State with some early crossing routes against man coverage, got receivers open in the first quarter and scored 10 points. But by leaning on the pass (Gavin Wimsatt threw 29 times), they opened the door for the aggressive passing frenzy and the Lions’ flashes to take over the game.

The Lions produced 15 tackles for loss and four sacks, with freshman linebacker Abdul Carter chasing Wimsatt for a stunning stop. That pressure led to three 21-point turnovers, including two scoop-and-score touchdowns. Linebacker Kobe King scored his first defensive touchdown since Little League. And safety Ji’Ayir Brown broke up the game by returning a fumble from 70 yards for a score. Regardless of the competition, Penn State has been playing some of the Big Ten’s best defenses over the past three weeks.

A wild day for special teams coordinator Stacy Collins, who celebrated his unit’s first kickoff return of the season and collapsed immediately after Rutgers returned the ensuing kickoff 66 yards. Nicholas Singleton broke through a perfectly blocked return to a 100-yard score where he was untouched. “I have to admit,” Franklin said, “that kickoff return was a nice thing.”

Franklin also gambled successfully with his punters. Barney Amor struggled and gave up a try to newcomer Alex Bacchetta, who fumbled (nullified by a Rutgers penalty). Cupid returned to drop a 58 yarder inside the 5 yard line. Franklin congratulated himself on the move. Meanwhile, Jake Pinegar set the school record for extra points (185).

Defensive coordinator Manny Diaz has unleashed his group with exceptional results over the past three weeks. And offensive line coach Phil Trautwein deserves credit for maintaining a playable offensive line that admittedly had its bad moments on Saturday.

Penn State has played through a string of injuries against beleaguered opponents over the past three weeks and rolled them all. That counts for something, even if those opponents are thrashing about or lacking in talent. As Franklin said, his team is “getting better,” which is a strong November trait, especially as the 12-team playoffs near.

Penn State hosts Michigan State for their regular season finale on November 26 at Beaver Stadium. Kickoff is at 4 p.m. ET.

James Franklin shares a request for an early seniors day

Nicholas Singleton pleads for Big Ten freshman of the year

Sean Clifford is ‘very underrated’ by his teammates

For James Franklin of Penn State University, a series of push-ups

AllPennState is Penn State’s place for news, opinions and perspectives on the SI.com network. Editor Mark Wogenrich has covered Penn State for more than 20 years, tracking three coaching staffs, three Big Ten titles and a catalog of great stories. Follow him on Twitter @ Mark Wogenrich. And subscribe to more great content on the SI.com network (buttons on the home page).