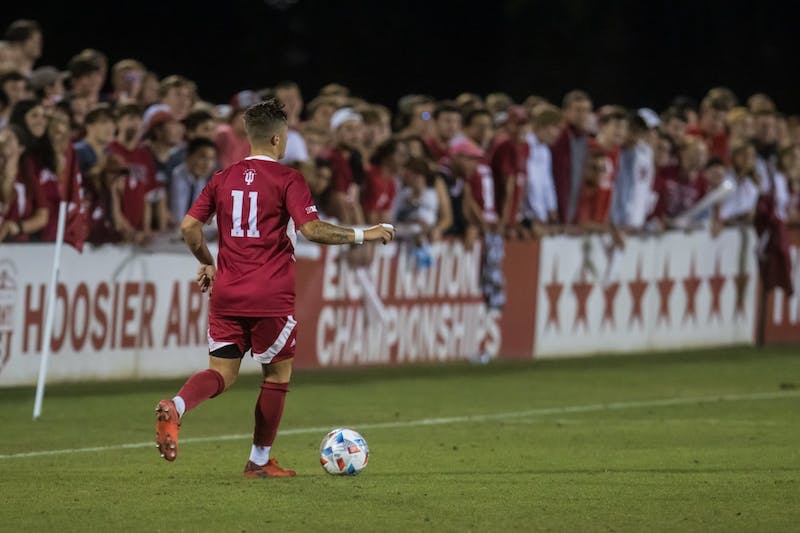 By securing 13th place overall in the NCAA tournament — which extended its one-seeded streak to nine straight seasons — Indiana men’s soccer earned the privilege of playing a home game in the second round.

The Hoosiers’ RPI, which has fluctuated throughout the regular season, was ranked 20th in the nation after their recent loss in the Big Ten tournament finals to Rutgers. Despite the far from reassuring ranking, the Hoosiers’ late conference run got them out of a midweek first-round matchup.

In the first press conference since Monday’s selection show, Indiana head coach Todd Yeagley cited the team’s strong schedule as the number one reason the Hoosiers have a number next to their name in the bracket.

“Our willingness to hit the road, average win overall and the eyeball test,” Yeagley said. “All of these factors have brought us to where we are now. The job (of the committee) is always to do it as right as possible. The name (Indiana) certainly doesn’t hurt, but I don’t know if that gets us that much further.”

After several days of uncertainty, the wait is over. Indiana knows its first opponent in the quest for a ninth star above its coat of arms: Saint Louis University. A trip to the Sweet Sixteen is scheduled for Sunday afternoon at Bill Armstrong Stadium.

Saint Louis defeated the University of Memphis in the first round Thursday night to win 4-2 in an overtime thriller. The Billikens fell 1-0 down against the Tigers early on but rallied to a 2-2 draw over 90 minutes, scoring in each of the two overtime periods to the delight of their home fans.

Meanwhile, Indiana used the extra days off granted by the bye as an important recovery period after a busy week of Big Ten play. Yeagley said the group would have been ready to go had the Hoosiers not gotten a top-16 seed, but fully expects all players to be healthy with the extra break.

“That was a lot of energy expended on those three games in a short amount of time,” Yeagley said. “The legs were a bit tired in the second half against Rutgers. Every time you play in the conference finals, it puts a strain on the group.”

The true postseason has finally arrived for the Hoosiers, and they can fully focus on the first of five games on their road to College Cup glory.

While Indiana is chasing a ninth title, Saint Louis already has 10 under their belt – good for the men’s all-time record. Though the Billikens have not been crowned champions since 1973 — the end of a dominant 15-year run since NCAA tournaments began in 1959 — they have now qualified for the national tournament in 35 of their 48 seasons.

However, Indiana has won the better Saint Louis in the postseason, winning all four previous encounters in the circumstances.

More college football kings could also pave Indiana’s way, as a sweet sixteen date with the University of Virginia No. 4 — third-most national championships at seven — is possible.

“As someone who’s been around a long time and grew up with it, I love the historical part of it,” Yeagley said. “What we always take with us is a lot of confidence that the expectation of getting results is always there. Faith is a lot, the willingness not to be disturbed. Perhaps that’s what the program helps the most: to inspire a belief that they can dig more and take great pride in what they do.”

The Billikens didn’t get to this point by accident, as evidenced by their four-goal performance against Memphis. They led the Atlantic 10 Conference with a 6-1-1 record and followed with a postseason conference title.

Despite playing in many high-profile competitions throughout the season, Saint Louis easily maintained and surpassed the offensive firepower of his opponents. Three different players have scored six or more goals for the Billikens this season, led by veteran midfielder John Klein’s seven attacking goals.

“They have a good spirit on their team,” Yeagley said. “The A-10 is a tough league in the sense that there are some interesting places to play, you have to be able to get wins and play different styles – they could.”

Yeagley said he expects Saint Louis to play more compact defensively than most opponents, attributing his strong results to a balanced playstyle and structure. He stressed the importance of deflecting set pieces from the Billikens, who have had similar success in restarts as the Hoosiers.

“We’ve played against teams of a similar composition, so it’s positive for us to see that,” Yeagley said. “We have to be sharp – both teams have confidence in this area.”

The two teams will face off in Bloomington, but facing this particular opponent is a homecoming of sorts for several Indiana players.

Redshirt senior defenseman Daniel Munie, senior defenseman Jansen Miller and freshman midfielder Jack Wagoner are a few Hoosiers who have played at club level in and around the St. Louis, Missouri area. While they shouldn’t brush aside the personal significance of this, Yeagley knows his players will be locked in for the task at hand.

“It doesn’t affect what we do once we enter that field,” Yeagley said. “Is there a subconscious part? Could be. I know as a player I might have had a few things in mind. A lot of that just slips away in-game.”

Sunday’s second round matchup, expected to be played in cold conditions, will be broadcast on ESPN+.