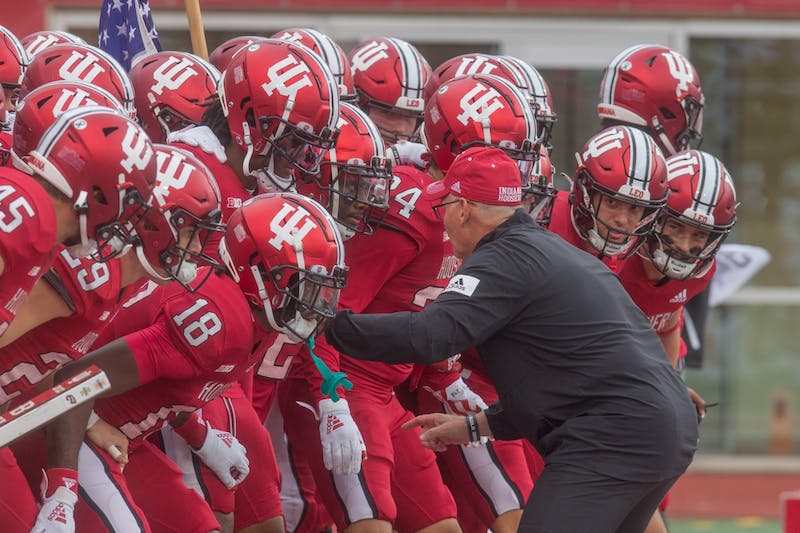 Indiana Football earned its fourth win of the season on the road in a duel against Michigan State in a double overtime affair filled with snow flurries.

After falling 17 points behind in the first half, the Hoosiers were able to cut the Spartans’ lead to level the game late in the second half. In second quarterback Dexter Williams II’s first start of the year, a run-heavy game plan helped the Hoosiers win 39-31.

“They knew it was my first start and I couldn’t have done it without them,” Williams said.

In a season that began with three straight wins and has since slumped into winter, it was a significant win for the program.

“I was really proud of our players and the fight they showed today – unbelievable,” said head coach Tom Allen.

It was a completely inverted script for the Hoosiers as they entered the game and passed more than most teams in the nation. But against the Spartans, Williams only threw the ball seven times in the game.

In the running back room, all three contributors made big plays alongside Williams’ rush efforts. Indiana finished the game with a total of 261 rushing yards compared to just 31 passing yards, but when it mattered most in the second overtime, Williams junior tight end AJ Barner hit in the red zone to score the winning goal.

In a season where the Hoosiers were inconsistent on both sides of the ball and barely had a quick attack, they found a way to dominate on the ground in East Lansing, Michigan.

While Williams’ decision was made just before game day, it paid off with an efficient offensive performance. Williams finished the game with 31 yards through the air but carried the team with his rushing play, running it 16 times for 86 yards and a touchdown.

His stable of running backs also had their best game of the season. Senior Shaun Shivers carried the rock 13 times for 115 yards and two touchdowns, including the game-winner. Fellow senior Josh Henderson did the dirty work, a total of 11 carries for 36 yards and a touchdown of his own.

When it came to Shivers, Allen was more than happy with the performance.

“He saved his best for us for a really important game,” Allen said.

Freshman tailback Jaylin Lucas made his performance in the second leg, hitting his second kick return for a touchdown this season and putting Indiana up with great field position throughout.

While the offensive showed a great game, the defense put in big moments. A stoppage while the game was still open allowed Indiana to close the gap in the second half and the crucial stop in second overtime sealed the win.

Both sides were hampered by special teams. Michigan State missed the kick to end regulation and then had its first field goal of overtime blocked by Indiana. When Indiana had the ball in first overtime, Michigan State returned the favor and blocked the Hoosier’s kick.

The Hoosiers improved to 4-7 during the season and won their second Big Ten game of the year. As Indiana gears up for next Saturday’s clash with Purdue, that win might just have provided a much-needed boost.

Follow reporter Garrett Newman (@Garrett Newman20) and Jakob Spudich (@spudichjacob) and columnist Will Foley (@foles24) for updates throughout the Indiana football season.
Support the Indiana Daily Student to beat Purdue’s student newspaper exponent, by donating to the IDS Legacy Fund! Whichever publication raises more money ahead of the Nov. 26 Purdue-IU football game “wins” the challenge, but all donations go to supporting student journalism at their respective publications. To help IU beat Purdue and support the IDS, follow this one shortcut Donate.