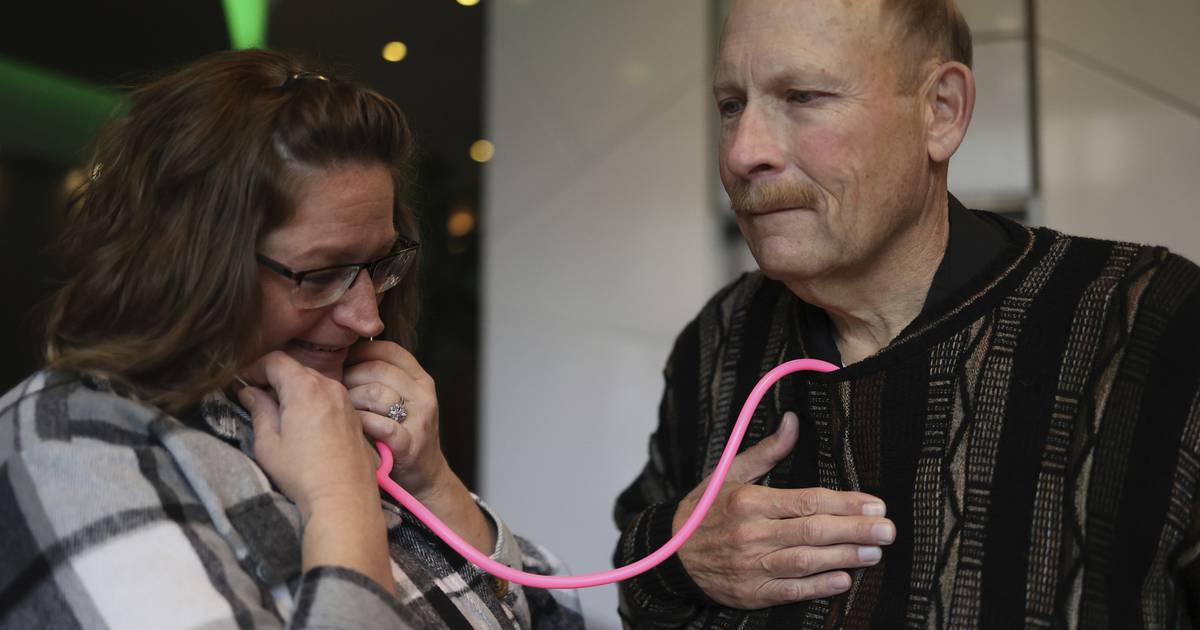 She recalls hearing her daughter Andreona’s heartbeat for the first time when she was pregnant and again when Andreona was on life support at age 20 battling asthma complications that eventually led to her death.

Now, almost five years later, Morgan has had the rare opportunity to hear that special sound again through Tom Johnson, who is a transplant recipient living with Andreona’s heart.

“As a mother, you hear your child’s heartbeat when you carry them, and I don’t think you’ll ever ask to hear them again,” she said. “It is wonderful.”

At an emotional reunion at a downtown Chicago hotel on Saturday morning, Morgan witnessed her late daughter, who died in 2018, live on in Tom’s chest. It was a moment for families to celebrate both Andreona’s life and Tom’s new life after his long battles with heart problems.

The Indiana Donor Network coordinates fewer than 30 of these meetings between organ transplant recipients and donor families each year. They only occur when donor families agree to meet the recipients.

“It’s just such a blessing for me to meet Amber,” said Tom. “I prayed practically every night that this would happen. I have always referred to my donor and now I have a name. It’s just indescribable.”

The event was also unique in its timing, with just over a week of planning.

“Sometimes it takes months or even longer to get that going,” Tom said. “I was so excited. I couldn’t miss it.”

Tom and his 48-year-old wife, Sharon, traveled from Kankakee, Illinois for the big day. Morgan came from South Bend, Indiana, with her granddaughter, six-year-old Avery Williams.

When they first met, Morgan and Tom hugged tightly. Morgan was then able to take a pink stethoscope and hold it to Tom’s chest and heard a sound she didn’t know she would ever hear again. She hugged him again as she listened.

Tom first sent Morgan a letter around Christmas 2019. He said it took him a long time to write it after a “challenging recovery,” but wanted to share his gratitude for the family’s decision to donate.

He then sent a second letter but received no reply. That is, until about a week ago, when Morgan expressed her interest in setting up a meeting. She said after experiencing a heart attack herself, she felt inspired to reach out and finally meet the person who holds her daughter’s heart.

“I’ve read the letter and you’re hearing about it, you know it’s inside someone else and helping them, but actually hearing and seeing the result is amazing,” Morgan said. “She made me so proud her whole life, and she still makes me proud.”

When it was a smiling Avery’s turn to hear the heart, Morgan asked her how it sounded. Avery mimicked the throbbing sound and handed the stethoscope to Tom so he could hear it too.

Morgan then asked Avery where her ‘TT’ was. It’s sort of a nickname for “auntie,” Morgan said.

Avery replied that she was in heaven. When Morgan asked, “Where’s her heart?” she answered proudly, pointing to Tom’s chest.

In a statement to the Tribune, Jamie Rivas, director of family and donor services at the Indiana Donor Network, said the gift of organ donation can create a “sense of hope and healing” after the loss of a loved one.

“By helping them connect, donor families and recipients can help each other celebrate the legacy that comes when a donor gives the gift of life,” the statement said.

When asked about her late daughter, Morgan recalled her generosity and said Andreona is active in the community and would host food drives and other events in low-income areas. While her condition didn’t stop her from achieving her goals, Morgan said Andreona had struggled with asthma her entire life and was unable to engage in the same activities as other children.

When she died young, the family decided to donate her organs to save lives. That decision has saved three people so far, including 68-year-old Tom.

“She lives through him,” Morgan said. “Now she’s able to do all the things she couldn’t really do for reasons similar to his.” She also went out of breath, but her asthma was.”

Tom was diagnosed with cardiomyopathy at the age of 7 and has suffered from multiple heart problems ever since. He said growing up, going to a local children’s hospital to get tested was almost a summertime ritual. At the age of 11 he had his first heart catheter. He later developed congestive heart disease.

After trying a pacemaker and defibrillator, a doctor told Johnson they had no choice but to have a heart transplant.

“The heart transplant was the only way to survive,” Johnson said.

Johnson was on the transplant waiting list for 18 months. On their granddaughter’s birthday in December 2018, Tom and Sharon received the late night phone call that changed their lives. He would receive Andreona’s heart at Loyola University Medical Center in Maywood.

Sharon already had a gut feeling of what was about to happen after realizing the hospital was calling.

“I started crying because when we left the doctor’s office, they said we’d never get a heart, and I said, God knows, if you’re supposed to get a heart, you’re going to get a heart,” she said. “What a blessing for us.”

She also said that the date of the transplant, the 19th, has special meaning as their wedding date is October 19th. Thinking back on the surgery, she recalls the relief she felt when a nurse came to tell her that Andreona’s heart was a perfect fit.

“It was just, thank God, this is where our journey to improvement comes in, and it’s taken us a long time to get there,” Sharon said.

It was a healing time for both families as Andreona’s funeral took place around Christmas and Tom began his transplant recovery. Johnson spent the next few months in the hospital as he began physical therapy and learned to walk again.

The Chicago Tribune editors’ top story picks, delivered to your inbox each afternoon.

Now, almost five years after his second chance at life, Johnson, a retired nurse, respiratory therapist and healthcare IT manager, is doing things he never could — long bike rides, treadmills and the ability to climb stairs without tiring.

Tom has taken his children and grandchildren to weddings, baseball games, dance recitals, and other family occasions, all things he didn’t think he had the opportunity to do. He will also be great-grandparents in January.

Sharon recalls watching her husband play soccer with his grandchildren for the first time after the procedure. She said the kids gasped in amazement when they saw how high he could kick the ball in the air.

“It opened up a whole new world of possibilities,” said Tom. “It’s just incredible. I mean, I can exercise in the garden, ride a bike. My sons can’t believe how fast I can drive.”

Both Morgan and Tom described Saturday’s gathering as a “fresh start” for the families. Sharon said she was grateful for the time she now has with her husband thanks to the Morgans’ gift and assured Adreona’s heart will always be safe.

“He takes special care of her,” Sharon said. “He never misses his heart meds. Never.”