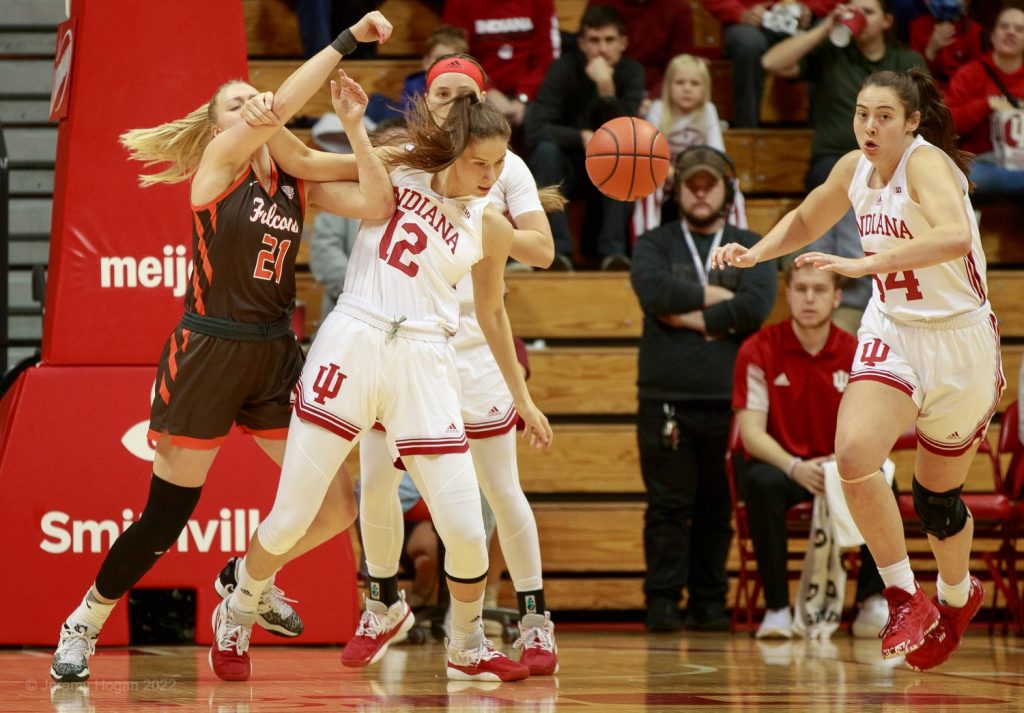 The 12thth The nationally placed Indiana Hoosiers (3-0) received the Falcons of Bowling Green (2-0) on Thursday evening in the Simon Skjodt Assembly Hall in front of almost 3700 spectators.

Bowling Green has a fast game and challenged Indiana on the edge, but they shot just 22% from the field in the first quarter and were 18-6 down after the first ten minutes of play. Indiana led 28-10 into the second quarter.

At halftime, Indiana had built a 28-point lead and was shooting 58% from the field, including 14 points from the bench. The only challenge the stats box would show after 20 minutes of play was 13 Indiana turnovers.

“Of course I’m disappointed with the 18 turnovers, that’s way too many,” said Indiana’s head coach Teri Moren after the game.

“A lot of these weren’t forced sales, they were casual sales. . . tonight was one of those nights where we had the silliness of travel Sara [Scalia] had a trip [Mackenzie Holmes] had a few trips, and grace [Berger] had a charge,” Coach continued. “A lot of that revenue is on us, not Bowling Green, so we have to take care of that.”

But tonight there is much to celebrate as the team once again played as a complete unit to claim victory. At the final buzzer the scoreboard read 96-61 and there are many positive stories about the final score. Indiana had 6 players who finished the game in double figures, with Sara Scalia leading the way with 17 points, including 2 from beyond the arc. Mackenzie Holmes had 16; Grace Berger had 14; Sydney Parrish and Yarden Garzon each with 11; and Chloe Moore-McNeil had 10.

Sydney Parrish, the junior transfer from Oregon, had her first IU double-double (11 points and 10 rebounds). Kaitlyn Peterson came off the bench, scored 6 points and added 4 steals. The Hoosiers had 25 team assists and held their 4thth Consecutive opponents to 10 or fewer second chance points.

Next up for IU is a home game Sunday at 1:00 p.m. against Quinnipiac, a team that seriously challenged the Hoosiers on the road last year.