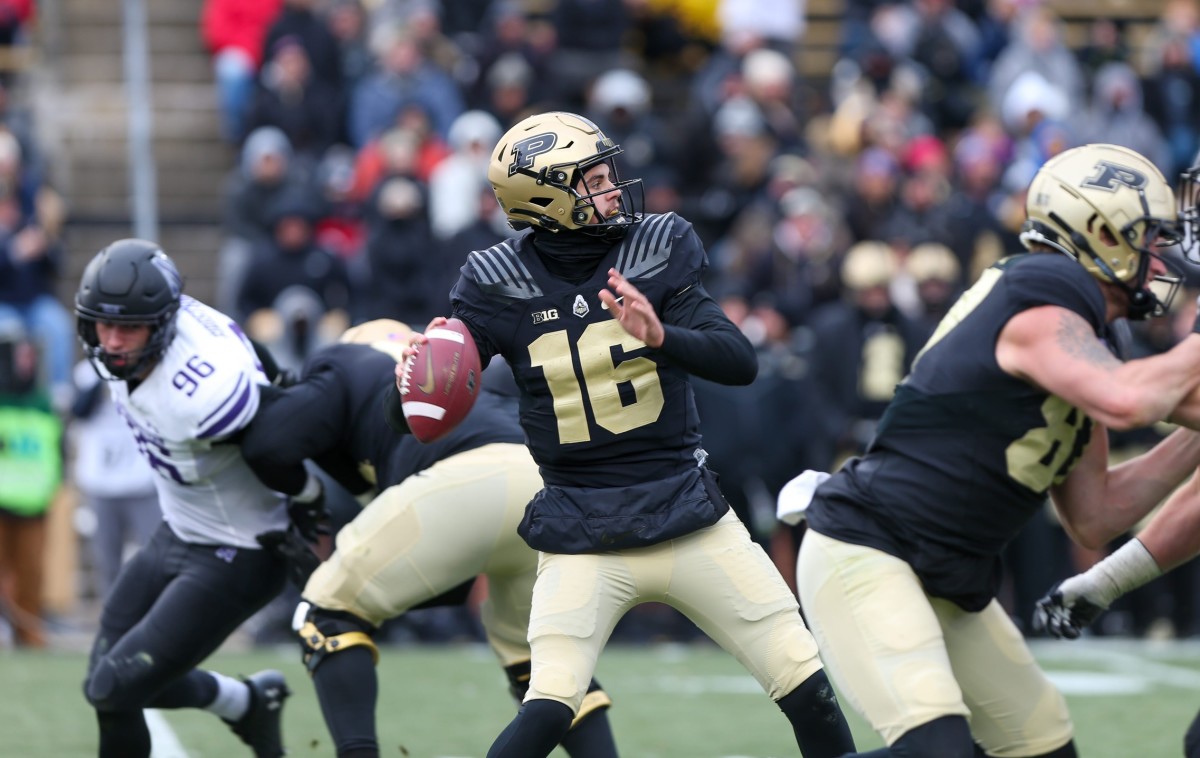 WEST LAFAYETTE, Indiana — Purdue’s defense held Northwestern for 240 total yards and forced three turnovers in the second half in a 17-9 win Saturday at Ross-Ade Stadium and sent the team’s seniors off with a win in their last home game of the year.

The Wildcats tried to level the score near the end of the final minutes, but Redshirt senior defensive end Jack Sullivan charged into the backfield as a fourth down and knocked out the quarterback to stifle a comeback attempt. Sixth-year senior quarterback Aidan O’Connell threw for a season-low 159 yards but brought the offense into the end zone twice in the first half to take an early lead.

“It was a defensive day for football,” said Purdue coach Jeff Brohm. “When you ran in the field it was difficult to gain footing, it was slippery and because of the weather it was just difficult to be as efficient as you would like.”

Purdue – now 7-4 in the season and 5-3 in conference play – will take to the streets next week for a matchup with rival Indiana at Memorial Stadium in Bloomington, Indiana, with the team earning at least a share of the big Ten West title.

“We talk about it all the time, don’t make a game too big,” said Purdue Redshirt senior tight end Payne Durham. “Of course we all know that. We’re not blind to it, but we’re going to focus on it like we would any other week and attack it and go out and play our game.

The Wildcats were led by junior running back Even Hull’s 105 yards rushing, but they only managed 78 yards as walk-on quarterback Cole Freeman made his first start of his college football career as a sophomore.

Purdue matriculated slowly downfield on his opening possession and reached the northwest 33-yard line before being stopped without a win on the fourth down. The longest play on the drive was a 19-yard carry from redshirt senior wide receiver Tyrone Tracy.

After failing to show any points for moving the ball into opposing territory, the Boilermakers responded with a 10-play, 70-yard scoring drive. Dodging the pressure, O’Connell looked to the right side of the field, where he found sixth-year wide receiver Charlie Jones for a 15-yard touchdown.

Northwestern responded with a shot on goal of their own, moving the chains to fourth near midfield thanks to an offside penalty from Purdue earlier in the second quarter. The Wildcats capped 13-game possession and 65 yards with a 23-yard field goal to make it 7-3 with 12:41 before halftime.

The Boilermakers totaled 199 rushing yards in the first half, including 112 on the ground, and O’Connell launched 9 of 12 through the air with two touchdown passes. He hit Durham from three yards to score the team’s second goal and Purdue went in the dressing room 14-3.

“I think we actually controlled the ball well and we had the ball for a long time, especially in the first half,” said O’Connell. “I just think we fell behind a couple of times in third place. I definitely missed a few reads, missed a few throws that I’d like to have back.

The Boilermakers tried to solidify their defensive lead early in the second half when Jalen Graham intercepted a pass and went untouched into the end zone. However, the senior was flagged for excessive partying during the return, which wiped the touchdown off the board.

“Of course we can’t allow that,” said Brohm. “We have to put an end to this and that has hurt us for the last two weeks. It was a good game negated by something stupid. We have to fix this and I think Jalen understands that.”

The offense maintained possession and walked just five yards in three games to put a 47-yard field goal downwind for fifth-year senior kicker Mitchell Fineran. The kick didn’t have the distance and wasn’t good. In subsequent possession, Purdue recovered from a northwest fumble at his own 42-yard line.

The offense played for fourth after the takeaway but couldn’t make the line to win. The Boilermakers force back-to-back turnovers and failed to capitalize on opportunities presented by the Wildcats.

The Purdue offense ran 16 total games in the third quarter and managed just 34 yards. The team went three and out of consecutive possessions before blocking a punt to set up a touchdown for Northwestern early in the fourth quarter. Hull smashed his way into the end zone from the 2-yard line to make it 14-9 after the Wildcats failed a 2-point conversion attempt.

The Boilermakers orchestrated just two drives in the closing stages, and a 26-yard field goal to go 7:08 into the game by eight points was enough to put the game out of reach.

“I’m happy that our boys got a tough win and sent the seniors home with a good grade,” said Brohm. “It’s always good to do that, these guys have put a lot of hours and time into helping this team improve and they’ve done a great job.”

You can keep up to date with everything at Boilermakers Country by liking and following our Facebook page: Purdue Boilermakers on Sports Illustrated/FanNation.