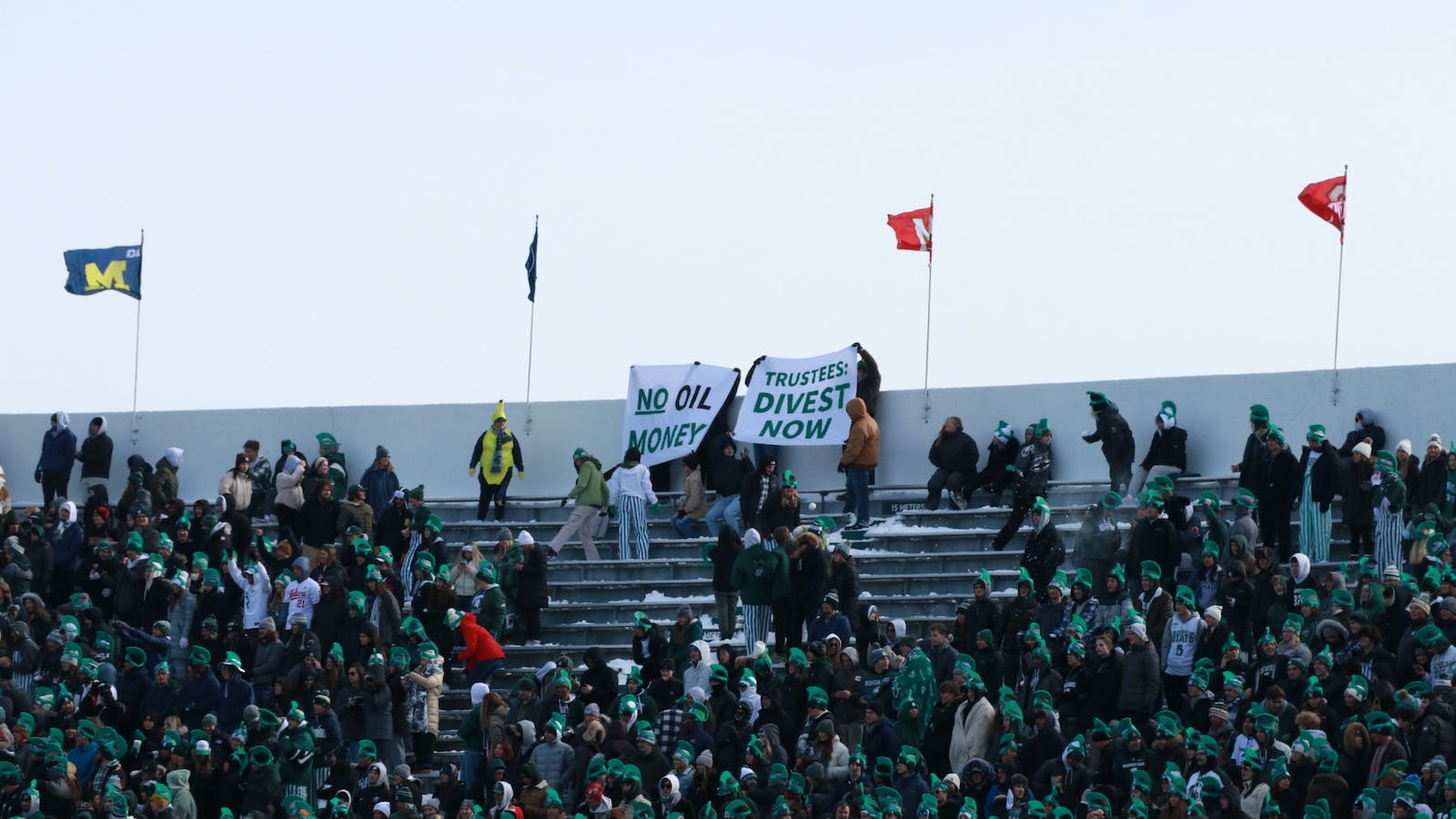 A protest by student organizers with the MSU chapter of the Sunrise movement was stopped by Spartan Stadium security during MSU’s last home game against Indiana.

During the game, Sunrise students stood at the top of the stands and unraveled banners that read “NO OIL MONEY” and “TRUSTEES: DIVEST NOW.”

Their protest is part of the group’s larger push for a full divestment of fossil fuels by MSU’s Office of Investments and the board’s investment committee.

Jesse Estrada-White, a sophomore in comparative cultures and politics, said they stood with the visible signs for about 10 minutes prior to the intervention. However, it may have felt longer than it really was “given the cold”.

Estrada-White said at that point a member of stadium security approached them and told them he would confiscate the banners.

Estrada-White said he then stepped aside to speak to the guard hoping to hold him off “as long as possible,” but the guard insisted they had violated university policy and had to forfeit the signs .

“He just kept saying ‘this is university policy,’ that he takes orders directly from top management,” Estrada-White said, “‘Up in the Tower’ were the words he used.”

MSU deputy spokesman Dan Olsen said that based on his discussions with Spartan Stadium administration, the Sunrise students were allowed to stay at the game as long as they put down their signs.

“The students were not asked to leave the stadium,” said Olsen. “They were just asked to give up the signs they had because it’s a violation of the policy.”

Olsen said in an email that Sunrise students “left voluntarily” after “stadium staff educated people on the no-sign policy.”

Estrada-White said at this point in the confrontation, “It didn’t really feel like an election.”

“I mean, you can say it was a choice, but … it was about keeping the property that we did or the football game,” Estrada-White said.

Olsen said today’s enforcement of this rule is consistent with previous instances. He and Spartan Stadium security could not point to specific instances of the previously enforced policy.

When asked if security forces would have handled the incident the same way if the signs had been in support of the team rather than protests against university administration, Estrada-White said, “I guess they wouldn’t have policed ​​it that much.”

Estrada-White said organizers were unaware of the rule prior to today’s protest.

“We were aware that there might be a rule against it,” Estrada-White said. “But we also know that there were people who had previously made signs by drawing on themselves and showing it like that, so I don’t really know what the difference is between those and ours.”

Estrada-White said he was aware of cases of messages painted on the body that were not monitored by stadium security.

Earlier this week, MSU Sunrise issued public statements after months of dormancy. In September, leaders told The State News that they would take time to hold closed “vision sessions” with new members to ensure the voices of their newest members are heard as they organize.

MSU hasn’t ended direct investments, as many are contracted, and an exit could result in further fees for the university. Many of the funds are controlled by money managers, so the board has no control over what the money is invested in.

The board believes investments in managed funds will be phased out by 2031, although they say they cannot be certain of that date.

“We believe them when they say our position has now been divested,” Estrada-White said in September. “We cannot wait until 2031. So now it’s time to sell off, sell off completely and invest again.”

“Our testimony is the same,” Estrada-White said today. “It is shameful that MSU is investing in fossil fuels. We challenge them to … reinvest in ways that support our communities.”