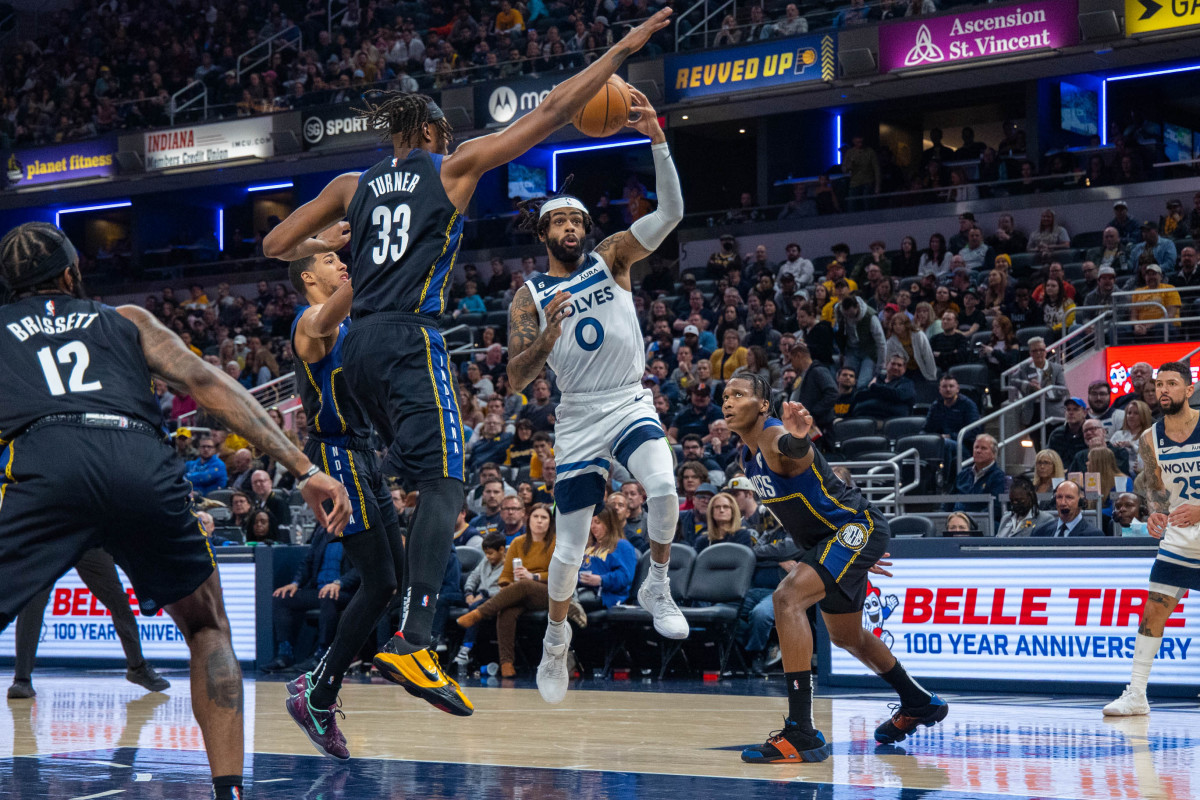 INDIANAPOLIS — The Indiana Pacers’ five-game winning streak came to an end on Wednesday when the Minnesota Timberwolves defeated the blue and gold in Indianapolis.

Once again, the Pacers’ greatest weakness was their start into the game. Indiana has the worst net rating in the NBA (-19.8) in the first quarter, they seem to have gotten off to a slow start in every game. That happened again Wednesday when the Pacers were 27-10 less than ten minutes into the game.

The Blue and Golds outplayed Minnesota in the remaining 38 minutes of action. But that didn’t matter because the team started so badly. They’ve struggled with starting games all season and Wednesday night was a particularly poor opening for the team.

“They got into Ty [Haliburton] a little bit,” warden Buddy Hield said early on about the Timberwolves’ strategy. “We just got punched in the mouth first and we didn’t respond.”

It looked like the Pacers would overcome their slow start, as they have done so many times this season, and regain control. They took a 21-second lead of 46:45 in the second quarter. But the Timberwolves scored on the next possession and never gave up the lead. They were the better team for most of the night and constantly had answers for Indiana’s runs.

Most Pacers who started at five had a night off. Tyrese Haliburton, Buddy Hield, Aaron Nesmith and Jalen Smith were 11/46 combined in the matchup. Haliburton passed well and Hield made some effective plays, but in general this quartet was really struggling.

Isaiah Jackson and Andrew Nembhard were absent from the bench and that group also faltered, with Oshae Brissett and Goga Bitadze both having more shots than points. Experienced greatness on every frontcourt position, Minnesota disrupted what Indiana wanted to do.

“They came up with the idea that physically they wanted a lot of disposition and presence to start the game. They gave us a hard time defensively,” said Pacers head coach Rick Carlisle. “We obviously didn’t do a lot of things very well,” he added, citing bouncing and shooting issues.

Two players shone for the Pacers despite the team’s interrupted night — Bennedict Mathurin and Myles Turner. Mathruin was the only pacer who could consistently paint and score, and he finished the race with 21 points from just 11 shot attempts. He got to the line multiple times and kept the Pacers in the game while other guards struggled.

Turner, on the other hand, dominated. He had his sixth appearance with over 30 points, dropping 31 points and catching seven rebounds. He added two assists, four steals and a block. The veteran center rained in seven three-point shots, forcing Minnesota to adjust on defense. The Pacers only had a chance in that game because of Turner’s brilliance.

“I knew they were bigger. I haven’t picked and popped much this year… Big ones have trouble guarding me. I know I’m taking my seats. The coach puts me in a good position to do that.” Turner said of his impressive night.

Baked into Turner’s incredible performance was the Pacers highlight of the year. He dived into lane on Jaden McDaniel’s and gave his team a ton of momentum, giving them an opportunity to make a run in the third quarter.

“It’s up there,” Turner said of that dunk and his rank in his career.

Despite Turner’s highlight and impressive night, the Pacers couldn’t make it against the Timberwolves, falling 115-101. It was Indiana’s second loss in November and the biggest loss in almost a month.

The Pacers are now 10-7 and are entering a tough lineup of opponents, including a seven-game road trip that begins Sunday. Winning the next game – at home to the Brooklyn Nets on Friday – could be crucial for a team hoping to gain some momentum before hitting the road.