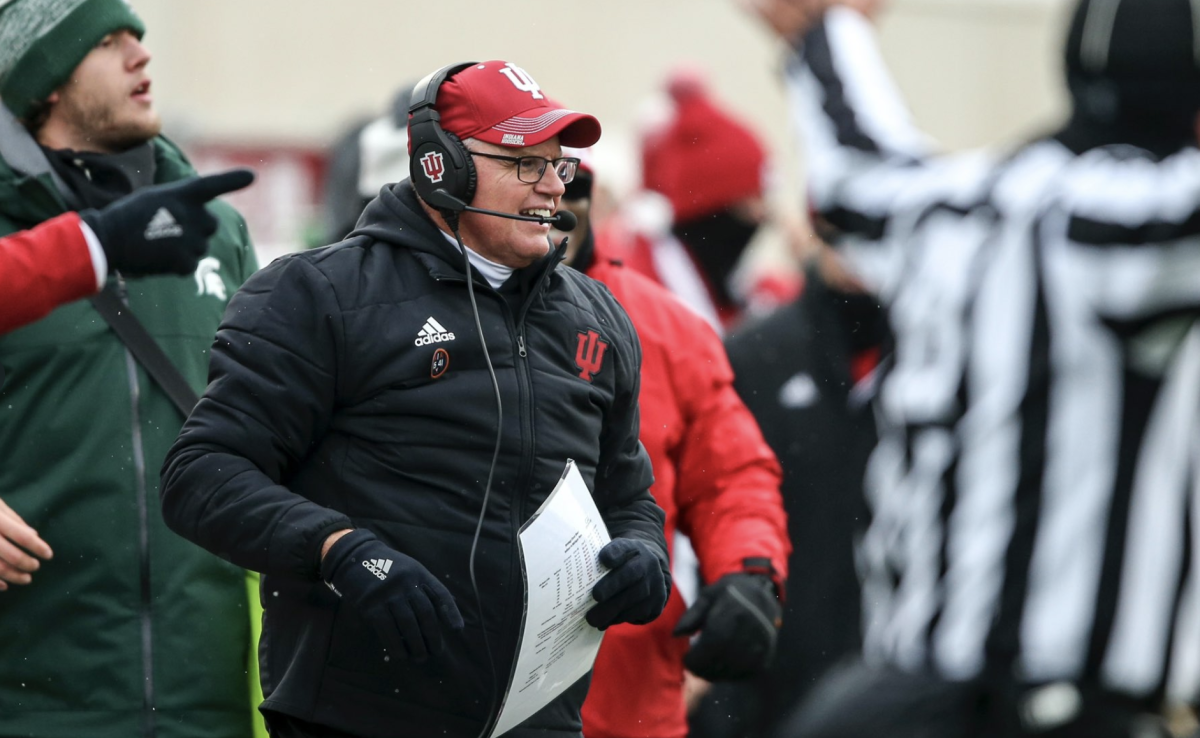 EAST LANSING, Mich. – Indiana Football ended its seven-game losing streak on Saturday when the Hoosiers clinched a 39-31 win over the Michigan State Spartans on the road to regain the Old Brass Spittoon.

ALL: “It’s an amazing win, just so proud of our team. They’re going crazy right now. They fought so hard. They never stopped believing. It was tough. It was a tough season. A lot of guys didn’t play today, but you know what, a lot of guys did it.

The guys who played fought to the bitter end. It wasn’t pretty, but we bowed, and we had to bow on both sides of the ball, and special teams did those things, so it’s a trophy game, trophy game, baby.

These games come on the wire. It’s the second time we’ve gone into overtime since I’ve been here and we’ve both won so we’re really blessed, grateful and we have a very, very excited, happy dressing room now as it should be.”

Fighting back after a bad first half…

ALL: “No question, and I just think you’re staying together. We’re making adjustments but it’s really just about guys making plays in those moments and we did that in the second half and got two threes and outs early on and we managed to get them punts twice in a row to get the Halfway to start and obviously got a touchdown, got a kickoff return for a touchdown after we gave up another score defensively, but you know it’s about fighting to the end and that’s been all week the topic long.

About some outstanding individual achievements…

ALL: “No question. You have to have that. Guys have to make plays and these guys did that. They think of Jonathan Haynes. He had to start because we ran out of linebackers. We had to get Bryant Fitzgerald to be the Stinger linebacker, so Fitzy started for the first time ever on Stinger.

He played there in some supporting roles. We had some injuries but he had to start there and I’ll tell you what Aaron Casey – nobody knows but he hasn’t really trained all week. He was injured and was injured in training on Tuesday. We didn’t think he could play.

He just threw it out, was actually on a scooter even during this morning’s run just to try and keep him ready to play and this guy screwed it up, one of many guys who played with so much heart .

I’m so proud of Jaylin Lucas at this kickoff return and Shaun Shivers at his job and the O-Line just getting better and better and just trying to take what we can do and maximize it and find a way in order to win. Our boys did that.”

ALL: “They’ve had their share of criticism and I understand why, but these guys soaked it up and obviously the conditions and the way they were and just knowing where we were with some key receivers you know exactly what matters the season we knew we had to run the ball to win the game and they knew it too.

We’re still able to do it and that’s just tremendous, so credit to the o-line. Rod Carey did a great job of getting these guys to improve a little every week and what a winner to break a negative streak while also getting the brass spittoon so it doesn’t get any better than this babe.

If Allen spat in the spittoon…

ALL: “I did it, and you know what, I never did the last two times we got it because I didn’t even know the rules the first time in 2016 and then in 2020, we have them here hit, and we weren’t allowed to spit in it because it was during the pandemic, so it was my very first time doing it.

Yes, that was undoubtedly a beautiful thing, and the bottom line is that the spittoon is owned by the Indiana Hoosiers. We’re going to fly this sucker back to Bloomington.”