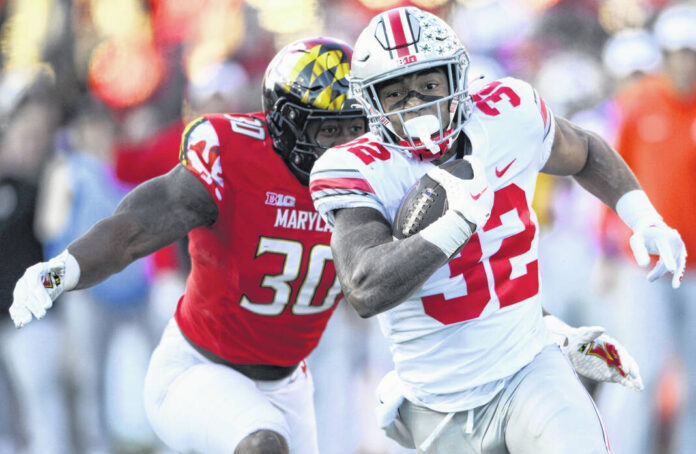 COLLEGE PARK, Md. — After Ohio State’s 43-30 win over Maryland on Saturday, OSU coach Ryan Day opened up about all the hard work and blood, sweat and tears that went into winning 11 straight games flown in preparation for the much-anticipated showdown of the undefeated football teams when Michigan heads to Ohio Stadium this Saturday.

At times, Saturday’s game, widely viewed as just a warm-up to the Michigan game, unexpectedly included all of these challenges and maybe a few more.

It looked like it was going to be easy. But for the rest of the game, not much came so easily for the Buckeyes.

Ohio State No. 2 (11-0, 8-0 Big Ten) found itself at halftime with a 13-10 record against a team it had never lost to in seven games, a team comprised of Penn State and Wisconsin has been dominated, again in the last two games.

OSU’s offensive struggled in the first half, especially in the running game. It had just 28 total yards and Henderson — in his first appearance after missing two games with a foot injury — had 11 carries for

Something had to change. And that change was to put the freshman running back Dallan Hayden into the game and give him the ball repeatedly.

Hayden finished with 146 yards rushing for 27 carries and three touchdowns. It was his third game of 100+ yard rushing this season and his second straight.

“We didn’t quite get the running game going in the first half and switched to Dallan and he really got us into the rhythm. I thought he was going to hit the holes really hard. He almost broke a few. If he gets that game, until his belt builds confidence in him,” Day said in his post-game press conference.

Henderson, obviously still struggling with his foot injury, did not play in the second half.

“Goal #1 is to win and move on. There will be games where you don’t pop out as fast as you’d like. I think the most important thing was that we got together at half-time and said it was going to be a four-quarter fight. We really buckled in the third quarter and then finished the game like we were supposed to,” said Day.

It was a defensive play that could have turned the game.

Maryland (6-5, 3-5 Big Ten) won the coin toss and postponed the ball until the second half.

On the Terrapins’ first possession of the second half, Lathan Ransom blocked a punt for the second straight week and Denzel Burke recovered it at the Maryland 14-yard line. Two plays later, Hayden hit the first of his three touchdowns on an 8-yard rush for a 17-13 Ohio State lead.

A 47-yard field goal from Noah Ruggles and an 11-play 88-yard scoring drive that ended with Hayden scoring his second touchdown gave OSU a 27-13 lead after three quarters.

But it still wasn’t easy. Ohio State was never behind after taking the lead, but Maryland was still within three points, at 33-30 with less than a minute to play before Ruggles’ 46-yard field goal made it 36-30 made.

OSU’s bottom line came when Maryland quarterback Taulia Tagovailoa (26 of 36 for 293 yards, 2 touchdowns) fumbled while being sacked by Zach Harrison, and Steele Chambers regained him for a touchdown with nine seconds left.

Now the Buckeyes can turn all their attention to playing Michigan on Saturday to pay back for last year’s 42-27 loss at Ann Arbor that ended an 8-game winning streak by Ohio State against the Wolverines.

“Our guys have been focused on that all off-season. It was always in the back of my mind throughout the season and now it’s here. I think we’re more experienced, we’re marked even though we’re on a 12-0 run. After that game, we were highly motivated to get back to where we are right now,” said Day.