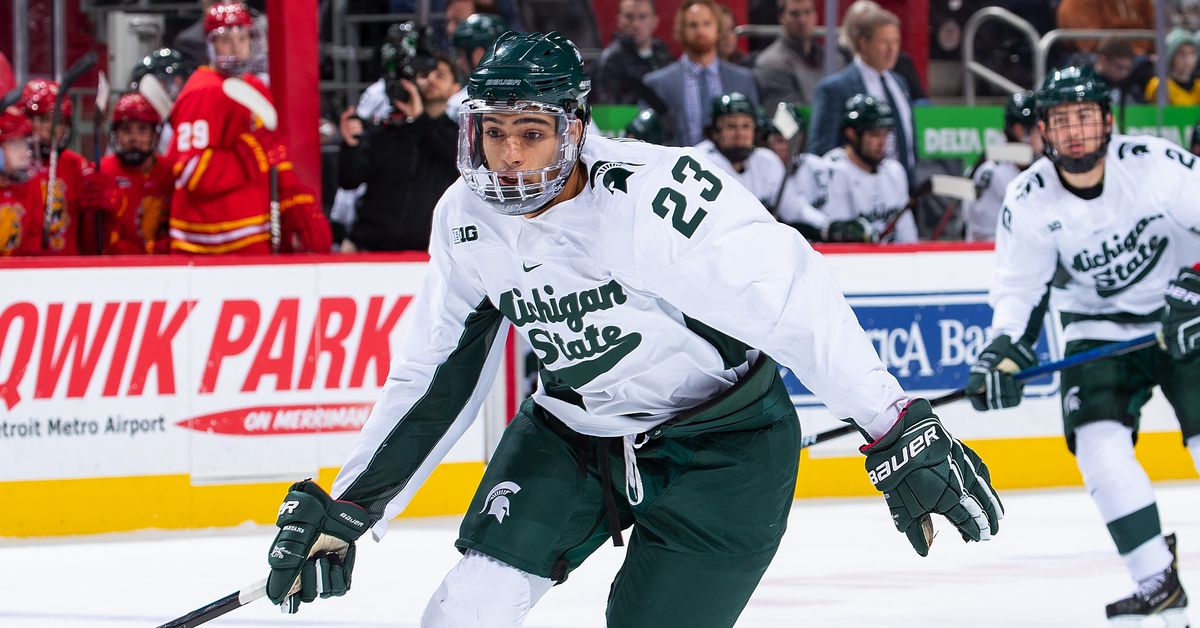 We have to pause our Rivalry Week coverage for a moment to focus on Ohio State men’s hockey and the Big Ten conference.

During the Nov. 11 men’s hockey game between the Buckeyes and Michigan State, Spartan forward Jagger Joshua was repeatedly called a racial slur by OSU forward Kamil Sadlocha. During the game, Sadlocha received a 10-minute game penalty when a referee overheard him using the bow.

Joshua spoke about the incident and released the following statement:

First of all, I would like to start by offering my support to Joshua. No player or person should ever hatred and ignorance, and it enrages me beyond measure that such behavior can happen within earshot of authority with no real consequences. I’m so grateful you had the courage to speak out about this experience and I sincerely hope it can be the catalyst for change in the Big Ten and the NCAA at large. Sending best wishes to Joshua and Spartan Hockey for the rest of their seasons.

I must also highlight the fact that the Big Ten and Ohio State have not taken immediate action. It wasn’t until Joshua made his statement – 10 days after the incident – that the conference accepted it.

The Big Ten released an official statement on the matter The Detroit News It said, and I quote, “Due to the lack of undeniable evidence presented to the conference, the conference did not impose any further disciplinary action.”

Yes. You read that right. They said that despite the fact it was Sadlocha, there was “no indisputable evidence.” heard by an official AND received a 10 minute game misconduct penalty! How much more undeniable can it be, Big Ten?

If your jaw is on the floor, it gets worse.

“The Big Ten Conference is committed to providing our student-athletes with an inclusive environment free from harassment or discrimination in any form. The safety and well-being of our campus communities remains our top priority.”

Is it your top priority? If so, you fail miserably. Your student athletes and students and anyone else who might find themselves on a Big Ten campus deserve to know that you will not tolerate racism. If the safety and well-being of your communities is truly your top priority and isn’t just a nice PR talking point, then you owe it to your communities to take quick and tough action against Sadlocha and OSU men’s hockey to prevent others from experiencing this Jagger Joshua did.

Joshua summed up the larger impact so brilliantly in his statement: “Acts of racism are not part of hockey as they can prevent black and minority people like me from playing and loving the game. Inaction in the face of racist comments and actions perpetuates these behaviors.”

By basically washing their hands off it, the Big Ten seem to be blowing smoke with their statement. And with that he tells other student athletes that racism is not taken seriously.

The NHL is 97% white players. Only 26 NHL hockey players are black. And if there is any hope of leveling the playing field, it must start at the lower levels. College hockey feeds the NHL, and if we want the NHL to change, college hockey must set the precedent that racism will not be tolerated under any circumstances. Otherwise, as Joshua said, inaction allows behaviors to continue that discourage minorities from playing the sport.

Ohio State also issued a statement The Detroit News, and said it “cooperated” with its investigation with the conference. The school also said it is “committed to recognizing our remarkable diversity and using our core values ​​to ensure everyone who attends a sporting event feels safe and welcome.”

In this case I have to contact my alma mater directly. This isn’t the first time an athlete has done something outrageous without real consequences for your watch. And given your track record, I’m sure it won’t be the last. In fact, I wrote about the lack of consequences for athletes 10 years ago, and it saddens me that very little seems to have changed.

A statement Tuesday by Ohio State Athletic Director Gene Smith said, “Kamil is returning home and will not be training or competing at this time.”

This is not strong enough either. That the school first tried to sweep this under the rug, followed by a statement that doesn’t even clarify whether Sadlocha left of her own accord or was suspended, is unacceptable. If he’s been suspended or kicked off the team (it should be the latter, if we’re being honest), you have to say so. Say, “Kamil has been removed from the team and is no longer allowed to train or compete.”

In fact, his removal from the team isn’t even a strong enough statement in my opinion. Sadlocha should be expelled from the school, as should any player, student, faculty member, etc., who goes around shouting racial slurs at people with the permissiveness and frequency that Sadlocka did. Racist slurs are no coincidence. They create an actively unsafe environment for a large proportion of the student body and should not be tolerated in sports or otherwise.

It is absolutely disgraceful that a school whose mission statement “Prepares a diverse student body to be leaders and engaged citizens” and “We understand that diversity and inclusion are integral parts of our excellence” does not have a zero-tolerance attitude on this authority.

You list “Diversity and Innovation,” “Inclusion and Equality,” and “Integrity and Respect” among your values, and yet your lack of action in this case shows your students, alumni, and outside observers that those are just fine words for the show are . It tells other students who might think it’s a good idea to use racial slurs that they’ll get away with it. And it tells students from minority groups that you’re not going to scold them to protect them.