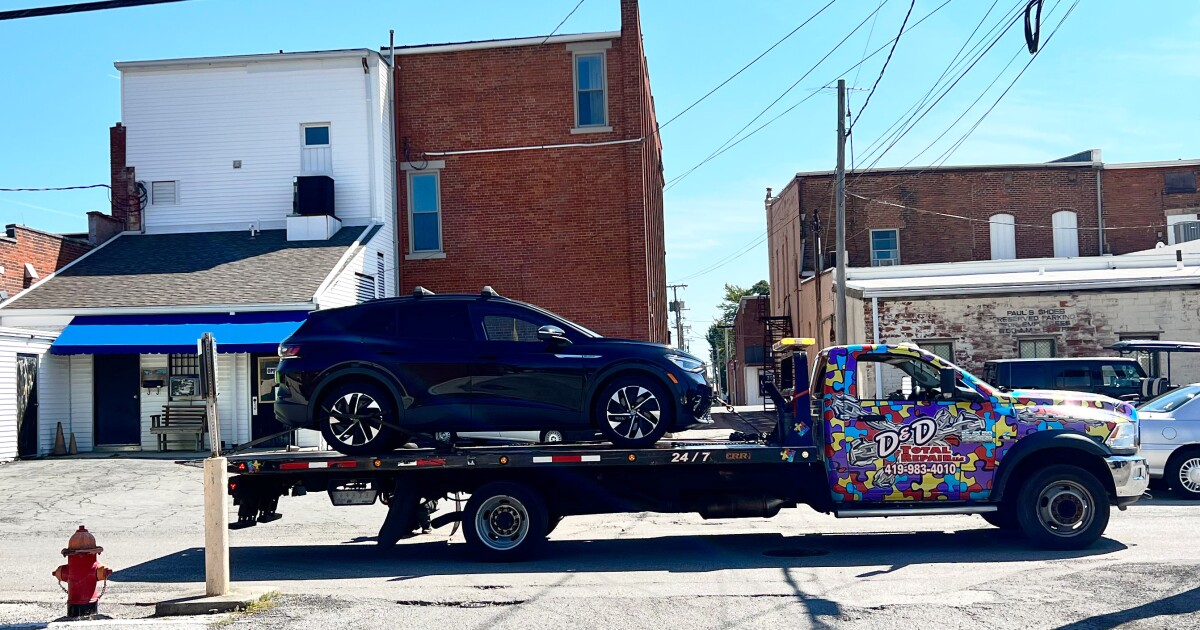 Charging an electric vehicle in central Ohio is relatively easy. Columbus has hundreds of charging stations scattered throughout the city, but as you travel further afield, charging opportunities quickly disappear.

Ruth Milligan, a longtime Clintonville resident, found this out the hard way when she drove her daughter to Michigan State University college in the family’s Volkswagen ID.4 in August.

“I had done all sorts of mapping and planning work and sent out some stuff in advance,” Milligan said.

A lot of her planning revolved around how much the car could hold, she explained. But weight was less of an issue than drag.

With luggage on the roof and a bike strapped to her back, the wind drag drained her car’s battery faster than expected. She realized that they would not make it to their planned stopover in Toledo.

“We found ourselves in a Mexican restaurant in the middle of Findlay, Ohio, and we were like, ‘How can we imagine coming to East Lansing?’ and the first thing we had to do was imagine not using that car to get there,” she said.

Milligan’s story illustrates the unequal distribution of charging stations across the state.

The US Department of Energy shows more than 1,400 station locations in Ohio, mostly located near urban centers.

But state officials say the road ahead is increasingly gas-free and Ohio needs to prepare for it.

“Automakers have signaled and indicated that they will be moving to electrified vehicles fairly quickly over the next five to 10 years,” said Preeti Choudhary, executive director of DriveOhio.

“These fast chargers could charge a battery and an electric vehicle battery in 20 to 40 minutes, compared to Tier 2 chargers, which would take between four and eight hours to get the same charge. So they have a significantly higher performance,” she said.

There are currently only 13 fast charging stations in Ohio that meet national standards, e.g. B. are one mile from a freeway exit and have at least four charging ports.

Choudhary said plans call for Ohio to add 30 more locations by 2025, located every 50 miles along freeways and state roads.

“We want to make sure everyone has reliable and safe access to fast chargers,” she said.

Electric cars are becoming increasingly popular in the state. It’s not just early adopters who are buying electric vehicles, but more and more transmissions as well, said Zach Doran, president of the Ohio Automobile Dealers Association.

“The performance of these cars and trucks is incredible,” said Doran. “They are super fast. They have a lot of torque. It’s fun to drive. And that’s why I think people are becoming more and more willing to look at them,” he said.

However, some are skeptical that Ohio is ready to move to electric vehicles.

“On the one hand you have to prepare for the future and that is the future of vehicles. But on the other hand, it’s one of those rare cases where demand has to meet expectations at some point,” Rothenberg said.

Battery life needs to be improved for electric vehicles to be truly viable, Rothenberg said. He also fears that despite government investment, there will be insufficient chargers in some areas.

“If you live in an apartment or are downtown, where will you plug your vehicle? How long does charging take? Those are all things that need to be worked on,” he said.

He’s also concerned about auto workers getting a fair wage.

“There are over 240 parts that go into an internal combustion engine, and all the jobs that make those parts need to make a lot fewer parts when you go to a battery-powered vehicle. So are these jobs paid the same as car jobs?” he said.

However, state and industry leaders say Ohio is poised to transition to electric vehicles.

“[Ohio auto dealers] are very involved in this process. They all buy specialty tools and equipment and do training with their technicians to prepare them for selling and servicing those vehicles and answering consumers’ questions,” Doran said.

“We will continue to bring this car to Michigan, but without a roof or a bike rack,” she said.