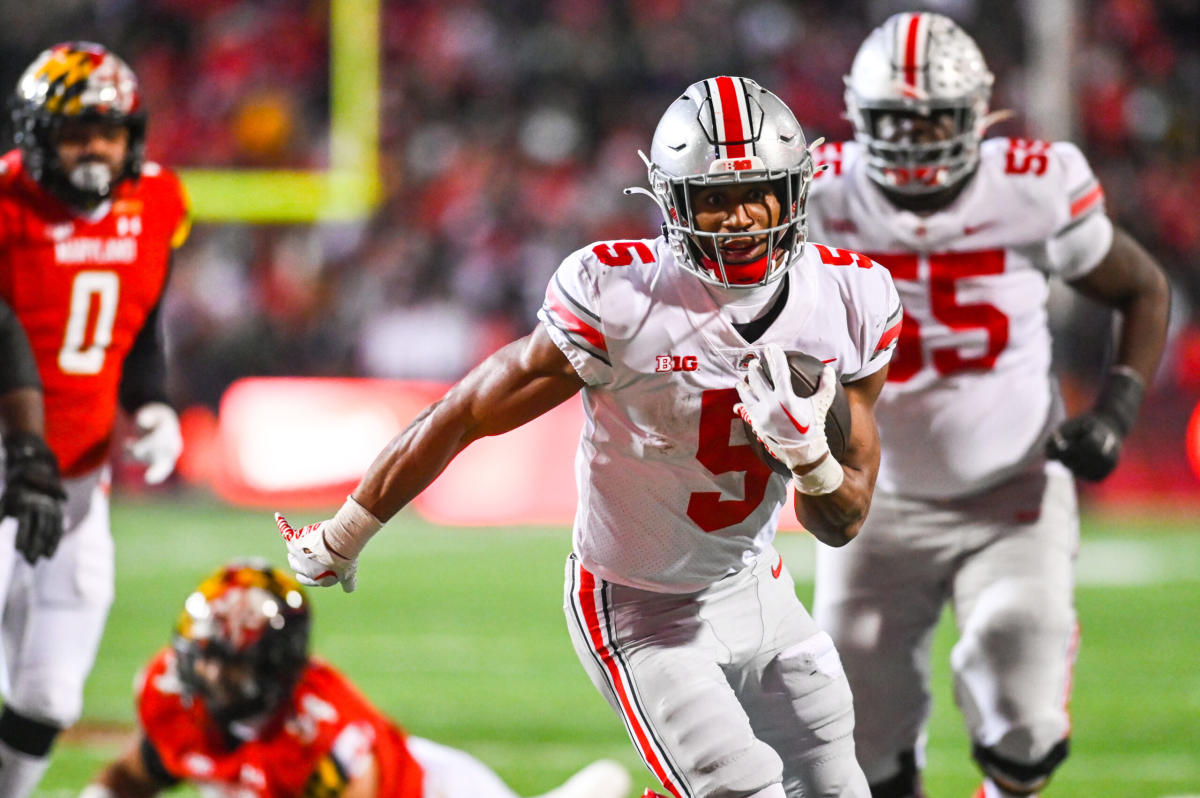 are you still alive and fit?

While we love watching entertaining college football games, it’s not nearly as exciting when Ohio State goes up against a Big Ten team in tighter-than-expected competition that probably should have handled it less dramatically.

At the end of the day, however, almost every top team in the country struggled in the penultimate week of the college football regular season with games that seemed to be bridges to bigger and better things. After all, Ohio State is set to host Michigan in the next edition of The Game this Saturday, and there are some trophies and confetti at stake. From there, it could be an appearance in the college football playoffs.

But back to the Maryland game. The Buckeyes made the halftime adjustments and began shoveling the ball to run back Dallan Hayden en route to a win that came down to tummy control from behind to bring even more scarlet and gray hair to the chest.

After each game we try to pull out five things we observed to take home and luckily this one is on the smiling side of the scoreboard for us to think about. It’s not all rosy, however, as there are some things that need to get a lot better next week.

Here are five things we learned from Ohio State’s hand-wrestling win over Maryland on Saturday.

The coaching staff needs to figure out this running game

It seems like a broken record now doesn’t it? Tell me if you’ve heard this before; Ohio State struggled in the first half in the running game.

The Buckeyes move the ball on the ground much better going north and south than running the stretch zone game. It’s the tendency that the offense has when given this type of action so that safeties and other DBs collapse and fill in the gaps, making it difficult to find a place to run.

What worked in the second half is the best recipe for success. Instead of stretching things out, OSU handed it to Dallen Hayden, who came into the field quickly, mostly behind the right side of the line, and took more control of the game on offense.

Obviously there are other things at play, but if Ohio State wants to do business against Michigan, they can’t slowly get back into the ground game. The talent is there, so it’s a bit bizarre why there’s so much fighting to move the tracks on the floor at times.

Where would Ohio State be without freshman running back Dallan Hayden in this case? It’s not hard to say that this one is unlikely to have a winning result unless the Buckeyes fed the ball to him in the second half.

As good as TreVeyon Henderson is, he tends to hop things out and lose yards, get frustrated, and then flush and repeat. To be fair, Henderson was injured, but right now there’s a noticeable difference when Hayden is in the game.

Hitting the hole, he gets to the second level and seems to have excellent vision. We could see him a lot against Michigan, especially when the other backs are still dinged.

The defense is good, but maybe not as good as we thought earlier this year

There’s no doubt that this Ohio State defense is a thousand light years better than the unit we saw last season. It’s been a top ten unit statistically for most of the year and acts as a warm glass of milk for the Buckeye offense during downtimes.

But there are still plenty of leaks that pose a problem, particularly pass defense. Taulia Tagovailoa lit up the secondary today, throwing nearly 300 yards, many of which were from the big game variation.

All in all, the defense gave everything that was needed, but the explosive plays are a problem. At least the storming defense was without light today. This will be used against the colors corn and blue next week.

See, I’d much rather have Ryan Day’s mindset than what we saw with Jim Tressel in the Senator’s days, but isn’t there a happy medium somewhere? Day has missed field goals too many times this year to try for fourth when three points could have made a big difference.

In that case, Day went point hunting with Maryland head coach Mike Locksley, putting Ohio State in a position where the Terrapins had a shot at winning it with a late touchdown.

Locksley challenged his team to bet two to draw within six points, and instead of simply kicking the extra point after the next OSU touchdown to move up 13, Day attempted the conversion to be 14 points clear to keep. Stroud lost track of the game clock, took a penalty, then the longer extra point was blocked and returned for a two. This is a three-point swing and changed the entire complexion of keeping the terps at bay to make it a one-score game.

Kick the extra point, let the other team chase points, and the Buckeyes could have kicked an extra point to decide things late.

A wise man once told me, “It only makes sense if it makes sense.” I hope that makes sense sense to all. Be aggressive, but retaliate when the situation calls for it.

On Saturday you saw why it is so difficult to pull off an unbeaten season. It’s the expectation in a place like Ohio State, but when you’re playing against so many different teams with different styles, different umpires, different locations, weather conditions and more, there are many variables at play that complicate things.

All five of the top teams in the College Football Playoff rankings struggled today, and it shows you the toll a full season can take on a team. You have to be really good, go through every single game and then take a few breaks to stay unbeaten.

Today was another example and let no one tell you that a narrow win in such a special season is not enough. It’s happened to many teams today and will be a thing every year this game is played.