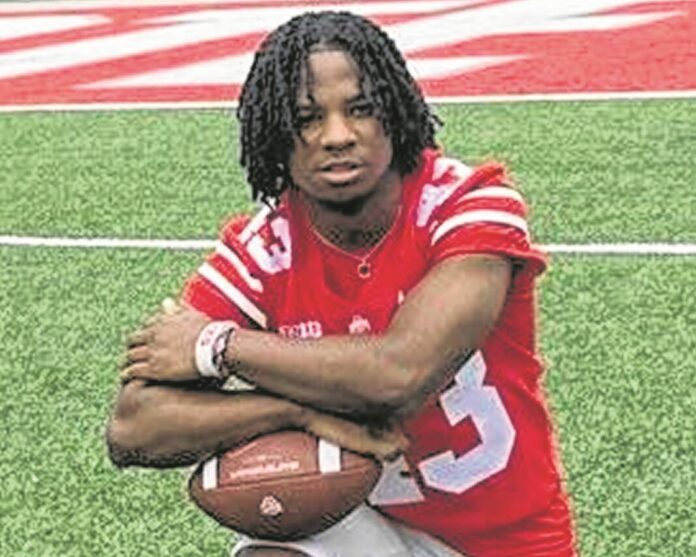 Diante Griffin’s belief that Ohio State is a special and unique place tells a lot about how the former Lima Senior defenseman became a favorite walk-on for the Buckeyes, standing on the touchline in an OSU No. 43 jersey will Ohio State-Michigan game on Saturday.

It’s like he has an internal global positioning system that’s always been set to the state of Ohio.

One of his grandfathers is two-time Heisman Trophy winner Archie Griffin. His other grandfather, David Reynolds, a first-team All-State running back at Lima Senior, was a running back from Ohio State in the mid-1960s. His father, Andre Griffin, an assistant coach at Ohio Northern and a former Lima Senior head coach, played at OSU from 1998-2001.

His uncle Adam Griffin and two of his father’s uncles, Ray Griffin and Duncan Griffin, played in Ohio State. His mother, Deanna Reynolds Griffin, and grandmother, Dorothy Reynolds, have OSU degrees. He is the seventh Griffin to wear an Ohio State football uniform.

“It’s really surreal. My family sits deep on both sides. That’s why I could never switch, even if I moved,” said Diante Griffin. “It was like I was born with it. I feel like I was born to be here.”

His devotion to Ohio State has never changed. But his address and homeland became Michigan of all places when Andre Griffin spent nine seasons as an assistant coach at Saginaw Valley State University.

Family members tell the story of how on his first visit to a Michigan restaurant, a much younger Diante stood up and shouted “OH” and was shocked not to get the usual response from Ohio State fans. “He asked, ‘Why didn’t anyone say IO?’ ‘ said Dave Reynolds.

His bond with the state of Ohio never waned. As a 5-10, 170-pound cornerback who was a second-team All-Three Rivers Athletic Conference, he wasn’t very recruited. But he made the decision to pursue his dreams in the state of Ohio.

“He always dreamed of it. He grew up in it. When we were in Michigan he still came to a few games. He used to wear my brother Adam’s jerseys, my father’s jerseys. He just wanted to live it out,” said Andre Griffin. “His dream was to play at Ohio State, so we decided to go ahead and try to achieve those dreams.”

Part of pursuing that dream was approaching Buckeyes football coach Ryan Day at a Lima Senior-Finlay boys basketball game last season to express his interest in a move to Ohio State. Day was at the game to see Findlay’s Luke and Ryan Montgomery, both recruiting targets for OSU.

After more exposure to the Day and Ohio State coaching staffs, OSU offered him the opportunity to become a preferred walk-on in April.

Diante Griffin called getting out of the tunnel at Ohio Stadium ahead of this season’s opener against Notre Dame “a dream come true.”

“I’ve been sitting in the stands or watching it on TV my whole life and I was just imagining it in that moment. When I experienced it, it was very special for me and my family,” he said.

Archie Griffin said he told his grandson to expect a lot of hard work as a student and as a walk-on athlete.

“I told him you have to work hard and be the best you can be. Go to class every day and you will be fine. I told him it was going to be difficult, but in the scout team you can learn and you can make a difference through hard work.

“As a walk-on, it’s a difficult role. But if you really want it, you can make it. He works hard and who knows, maybe he’ll get a chance later,” he said.

Archie Griffin was Ohio State’s leading rusher in three of the four games he played against Michigan and never lost to the Wolverines. Dave Reynolds appeared as a kickoff returner in the 1966 Michigan game.

Diante Griffin was encouraged by her recent recognition as Scout Team Player of the Week. But he knows that as a freshman in a roster full of 4-star and 5-star recruits, getting into a game goes a long way.

“It was a blessing. You walk in and you think it’s really hard and you have to work hard and maybe it won’t be as fun as high school. But I’ve had fun here, I’ve competed, I’ve met a lot of new people, made a lot of new friends and I love it here.”