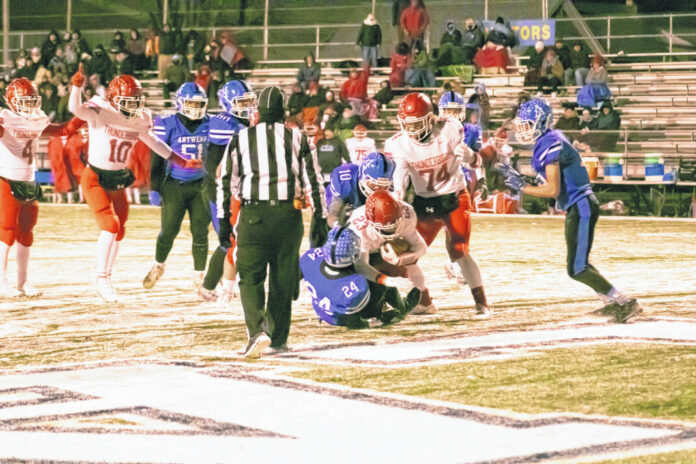 The Midwest Athletic Conference stands in the way of two teams reaching the state finals.

Two years ago, 1 yard stood between Lima Central Catholic and made it to the state finals when New Bremen stopped the T-Birds on a two-point conversion attempt that failed and ticketed the Cardinals to indicate they had finally won .

This year, LCC is looking to transcend that past memory and create new ones as they take on the Cardinals.

The Thunderbirds come into play after beating Antwerp 43-7. This follows the previous week’s 30-24 win over McComb, meaning the T-Birds have knocked off the No. 1 and No. 2 seeds in the region for consecutive weeks. LCC was ranked fourth in the region.

“We took care of the football,” said LCC head coach Scott Palte of his team’s breakthrough through the playoffs. “We did a good job in the handling department. We did a really good job on the line of scrimmage, directing the football and controlling the line, opening holes and doing really well with our backs.

Against Antwerp, T-Bird signal caller Carson Parker had 18 carries for 158 yards and Gabe Cira plowed for 19 carries for 135 yards.

Defensively, LCC ended Antwerp’s high-profile offensive. It didn’t hurt the T-Birds that Antwerp’s passing game was hampered by the weather, but LCC also played a role in Archers’ closure.

“We did a good job preventing the big game and getting teams to deserve the yards they get,” Palte said. “Just a really solid effort from our kids and I’m proud of the way they played.”

Palte attributes this playoff run, the team’s third consecutive Regional Finals entry, to the hard work, courage and leadership of that team, 14 of which are on the list.

Over the past two seasons, the T-Birds may have had more speed or more experienced individual players, but Palte said this team demonstrates a commitment as a unit to success.

“They’ve shown great leadership all year long, whether they’ve won or lost,” added Palte. “Our seniors came to work every day with a lunch pail mentality and they worked hard to get better. We preach that we have to get better every week and hopefully in week 11 we play our best football and of course we get a chance to prove that and I think our kids did that. The seniors have a tough mentality that rubbed off on the rest of the guys on the team.”

The T-Birds face another tough test in New Bremen, losing to Marion Local, Coldwater and Delphos St. John’s. LCC have beaten Delphos twice this season, once in the regular season and once in the postseason.

The Cardinals come into play with a 24-0 win over Fort Loramie, a team that defeated the T-Birds on the final day of the regular season.

In their first two playoff games, the Cardinals beat their opponents 88-15 and then came away with a 26-22 defeat of Ansonia in the regional semifinals.

During the regular season, New Bremen led the MAC in averaging 247.80 yards per game.

Cardinal Hunter Schaefer led the club in rushing for 1,141 yards and 15 touchdowns.

Defensively, the Cardinals ranked fourth on the MAC, giving up an average of 133.70 yards per contest.

Palte said that in order to face the Cardinals they must do what got them to this point, which is take care of the football and stop New Bremen’s powerful running attack.

Like LCC, Columbus Grove made their third straight appearance in the regional finals. Like the T-Birds, the Bulldogs must come through a MAC team. And not just any MAC team. Marion Local has been rolling over opponents all season and during the playoffs.

So it’s no surprise that the Bulldogs are training on Thanksgiving to prepare for a chance to reach the state finals.

Columbus Grove comes into play after putting on a dominating 34-0 performance against Columbia. Before that, the Bulldogs defeated Colonel Crawford 14-7 in overtime.

Andy Schafer said he wasn’t shocked his team made it this far in the postseason, and after the playoff brackets were released, the Bulldog head coach said he felt this team could make a deep run.

“We had the feeling that every game would be a little bigger,” said Schäfer. “By not playing someone out of goal, which wasn’t incredible, we were able to get better. That being said, I had a lot of confidence going into the postseason because I really felt like our team could grow and they certainly did.”

The Bulldog defense continued their stellar play into the postseason and is the main reason the team got to this point.

Schafer said earlier in the season he had spoken highly of his linebacker corps, which includes Tadd Koch, NWC Defensive Player of the Year, and AJ Schafer, last season’s All-Northwest District Player of the Year but when he spoke to the team on Monday he told them that this is no longer just a linebacking team.

While defense has done its due diligence, offense has also made tremendous strides throughout the season. Bulldog running back Trenton Barraza, who opened the contest last week with an 85-yard touchdown run and finished with 140 yards and three touchdowns on 18 carries, has been the mainstay on offense.

Schafer said the team has seen improvements from quarterback Brenton Renner, who’s had a year of ups and downs, and the emergence of Zach Reynolds at the receiver spot and AJ Schafer from the backfield.

“We’re going to keep going offensively,” said Schäfer. “Except for the Crawford game, where it was one of our weakest offensive games, but otherwise we played pretty solid. All in all it was nice to get 34 points in the terrible conditions we had last weekend.

“In the past we’ve leaned on one or two guys and this year it really wasn’t,” Schaefer said. “There was a time when it was just Trenton Barraza and then all of a sudden AJ came out of nowhere and started running the ball really well and has never been a return so he had to learn it a bit and the nice That means you had the speed of Barraza and the power of AJ, and then Zach Reynolds got hot and did a good job on the edge. Then Zach gets injured a week later and here comes Shep Halker who really stepped it up on offense.

Schafer points out that all of this is possible because of the “next-man mentality” the program has fostered over the years, adding that it was sort of a story of the season.

“We have zero selfishness in this team,” said Schafer. “They just don’t care. Whoever is hot we let them go and the receivers did a good job blocking it and it’s really, really good to see.”

Schafer knows all hands must be on deck when facing off against Marion Local.

“Definitely respect for coach (Tim) Goodwin and everything he built over there,” said Schafer. “They are doing a great job and are well trained. They are extremely athletic and run with a high confidence engine. I think the biggest thing about Marion Local is the mental game. You have the confidence.

“It’s the other way around for our boys. Everyone kind of doubted you. Everyone kind of wrote you off. Someone came up to me after the regional finals and said it was nice to see the unexpected. I didn’t even know what they were talking about because I expect to win every game. I expected to be here and I expected to win. I don’t know if that’s good or bad, but our players are wired the same way. We are happy to be here. We’re ready to play them. If you play Marion Local in week 15 of the playoffs, it means you’re good and you’ve made it this far and you’re still going. We train on Thanksgiving and there’s a fair amount of teams that want that opportunity.”