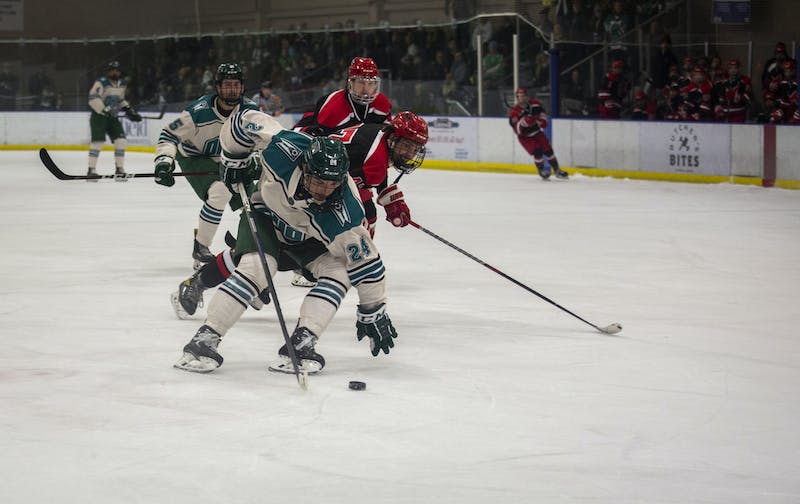 Ohio came into the game with renewed energy after Friday’s shutout loss, and it paid off. Ohio’s teamwork and improvement on both offense and defense were key in their 5-3 win over Central States Collegiate Hockey League rivals Maryville.

“I think we brought our structure in a bit more and our forecheck was really good,” said Ohio coach Lionel Mauron. “We had better legs, we played with more energy. It was all very good.”

The Bobcats came out hot in the first half, matching the Saints’ physicality and not letting them get too close to goaltender Justin Damon. 10:57 into the game, Luc Reeve put the Bobcats on the map with his 19th goal of the season.

The front row, consisting of Reeve, Laker Aldridge and Ryan Higgins, proved quite a weapon on the Bobcats offense as Higgins leveled the score at 2-0 less than two minutes later.

Hollander Thompson scored another goal for the Bobcats, but the Saints reacted quickly, snagging one from Damon for their first point of the night. The first period ended 3-2 as the Saints used their clean passing ability to score again.

The second half was mostly a stalemate, with no scoring and constant back and forth between the two teams. This was partly due to Damon, who has improved as a goalkeeper since the start of the season. That showed on Saturday when he blocked 19 of the Saints with 22 shots on target.

Mauron agrees that Damon was a key to the Bobcats’ defense.

“Justin (Damon) is very athletic, very fast and fights with a lot of pucks, so we know we have a chance to win if he’s in there,” Mauron said.

The third period was action-packed. Five minutes later, Christian Albertson and Aldridge scored back-to-back goals to level the score at 5-2 and give the Bobcats a more comfortable lead.

The rivalry between the Saints and the Bobcats was also most evident during this period, as the teams earned 18 and 8 penalty minutes, respectively. Aldridge earned six of Ohio’s 16 total penalty minutes on Saturday and currently has the team’s most penalty minutes at 45 this season.

For Aldridge he is exactly what he is as a player.

“Looking back at junior hockey, four years in, I had 600 or 700 penalty minutes,” Aldridge said. “It’s sort of like my identity.”

A win on Saturday is also something Aldridge particularly appreciates, and because Ohio’s win was over rival Maryville, it makes it that much better.

“It’s definitely more fun to beat them out of every team we play,” Aldridge said. “It’s just a little bit cuter.”

Mauron credits Saturday’s win to the Bobcats’ energy and connection.

“I loved our energy that we have on the bench as a group,” Mauron said. “Everyone was on the same page and we really worked as a team and I think that’s really encouraging for the future.”