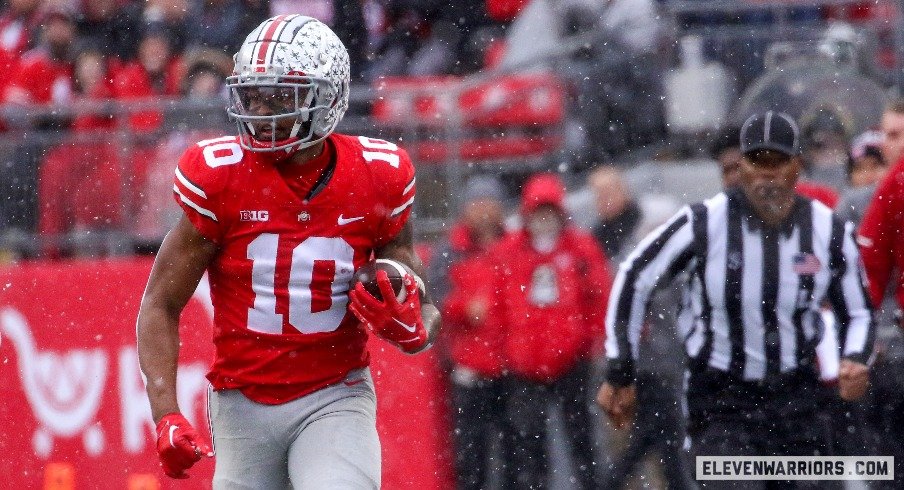 Despite The Game looming, Ohio State must complete its 11th Test of the season on Saturday and defeat Maryland before it can look forward to a clash with Michigan.

The Terrapins (6-4, 3-4 Big Ten) are a “talented and dangerous” bunch, according to head coach Ryan Day, especially when the team plays at home in College Park. Because of that, the Buckeyes can’t look beyond Maryland this weekend.

Led by quarterback Taulia Tagovailoa, running back Roman Hemby and wide receiver Rakim Jarrett, the Terps’ offense has the potential to put a lot of points on the board against any opponent. Meanwhile, defensemen Beau Brade and Dante Trader Jr. and linebacker Ahmad McCullough lead an experienced defensive unit capable of slowing down opponents and stopping them from playing at a high level.

“Maryland is always dangerous,” Day said this week. “A lot of very good athletes and Mike Locksley is a very good coach. They are good in general and have played against some strong teams this year.”

With just a few hours until kickoff, we’ll give our final thoughts, ask some questions, and take a few players with us to watch this fun encounter between the Buckeyes and the Terrapins.

This game will not boil down to the last game

There was much discussion this week about how “talented and dangerous” Maryland is as a program, especially this year when Tagovailoa returned with NFL-level receivers Jarrett and Dontay Demus. But honestly I haven’t seen any of those qualities for the team in 10 games this season.

Yes, Maryland played Michigan for its closest game this season. However, many of the Terps’ struggles have come since Tagovailoa injured his knee in that contest, and they’ve since lost to Purdue, narrowly beat Indiana and Northwestern, lost to Wisconsin — a game where Tagovailoa again aggravated his knee — and were hidden 30-0 by Penn State last week.

Perhaps Maryland was “talented and dangerous” at one point this season, but that’s no longer the case. I’d say the terps are more “limping and wounded” at this point. That being said, I don’t expect the Buckeyes to show sympathy, and I believe that if they do, they’ll walk away and add another blowout win to their resume in a final vote ahead of next Saturday’s The Game.

One last vote before The Game

Ryan Day has referred to the term competitive endurance so often over the past few months that Vegas under/overs should specify how many times he will say it per press conference. While it’s usually just cliché, it’s likely to be particularly true of OSU’s game with Maryland. When I was in Columbus this week, almost everyone I spoke to had the Buckeyes on their minds but wanted to talk about the Nov. 26 game against Michigan. It was like OSU had an open week of talks ahead of their annual rivalry match.

But OSU cannot fall into this trap itself. As the coaching staff prepares for The Game year-round, the Buckeye players can’t focus on Michigan until 7:30 p.m. Saturday, tempting as that may be. A final away win against a team that’s been struggling in recent weeks is all that’s left between the much-anticipated matchup between the historic rivals for years, but OSU needs to get down to business first.

Can Ohio State get its short-haul running game going?

Despite Ohio State rushing for 340 yards against Indiana, Day said after the game that he was “ready to bang my head against the wall” as the Buckeyes kept fighting in short-yardage situations since Ohio State was only 2-for went -7 on third and fourth down attempts of two yards or less. Day requested six carries for those seven games, which the head coach chalked up as “probably stubborn,” but I expect he’ll be stubborn about running the ball again in those situations as the Buckeyes try to prove they’re capable of a gritty third Space can race conversions that go into next week’s rivalry match.

Maryland ranks only 66th this season in rushing yards allowed per attempt (4.01) and 96th in opposing third-down conversion percentage (41.5), making up this week’s game could an opportunity for the Buckeyes to get things moving in that area before they face a much tougher running defense next week.

Despite his two worst performances of the year in consecutive weeks leading up to Saturday, Taulia Tagovailoa is still one of the best quarterbacks Ohio State has seen this season. Even after missing a game, the Maryland veteran is one of the top five passers in the Big Ten and could be healthier this week after returning from an injury a few weeks ago.

Meanwhile, the Buckeye defense had lost a starting cornerback in Denzel Burke last week. Day said he should be ready to return against Maryland and Jordan Hancock has performed admirably in his place anyway, but there could still be health issues to consider. Maryland’s offense has been a shell on its own in its last two appearances, but maybe it could make some big plays against the Buckeye defense in this matchup.

I was going to go with Dallan Hayden here, but I imagine either Dan, Garrick or Griffin might also have concerns about the freshman running back, so I’ll leave that to them. While I’ll continue to keep a close eye on Hayden on Saturday, I’ll be keeping a closer eye on Xavier Johnson, affectionately nicknamed “Weapon X” by some of his teammates.

For those who aren’t super nerds like me, Weapon X is an alias for The Wolverine in Marvel Comics. While The Wolverine may not be the most popular name or superhero in the Buckeye Nation due to its association with Michigan, the character is known for possessing super strength and reflexes with enhanced senses and healing powers. In other words, he can do anything. Xavier Johnson can do that too. I’m hoping Day unleashes Weapon X a few times on Saturday as Ohio State relies on him being a receiver, running back and coming back and contributing through all three phases of the game.

Day has been adamant all week that Ohio State will have several battered rushers back in action this week, but I have my doubts Hayden’s services will not be needed at College Park. The true freshman has done well this season, putting in two 100-yard games in auxiliary service and most recently surpassing the century mark last weekend. Even if one of Ohio State’s top two running backs returns against Maryland, the Buckeyes may want to split their workload with Hayden as both TreVeyon Henderson and Miyan Williams struggle with health issues for much of the year. For that reason, look to Hayden to see the field, even though Buckeye’s backfield hasn’t shrunk the way it did a week ago.

After hitting six touchdowns in his first five games of the season, Fleming went cold in Ohio State’s last three games, catching just five passes for 58 yards while dropping several catchable balls. With Michigan on the horizon next week and Jaxon Smith-Njigba’s availability for The Game looking questionable at best, now would be a good time for Fleming to warm up again and add some momentum to Rivalry Week.

After missing last week’s game against Indiana, Ryan Day said earlier in the week that he hopes to have Denzel Burke back for the Buckeyes’ matchup against Maryland on Saturday. Should Burke get the green light, he could be tasked with guarding Maryland top wideout Rakim Jarrett and could help other standouts like Jacob Copeland, Jeshaun Jones and Dontay Demus. It could be a big opportunity for the second cornerback to make a statement ahead of the Michigan game.