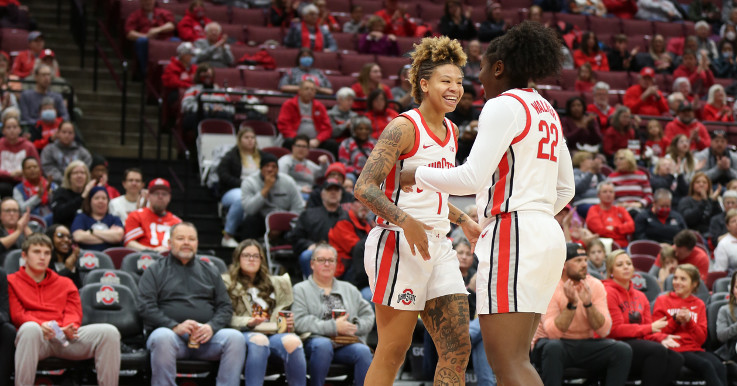 The McNeese State Cowgirls from Lake Charles, Louisiana visited Columbus, Ohio with a big task ahead of them. The 1-3 side of the Southland Conference faced the No. 8 Ohio State Buckeyes. To make matters worse, McNeese State’s game against Ohio State was their second in two days, having lost to the Bradley Braves just last night. The Scarlet & Gray took care of business and won 99-43.

In the Buckeyes’ last three games, an early lowlight has been inefficient shooting and a lack of open looks. On Sunday the court looked more like Harlem Globetrotters vs. Washington Generals. Of the nine players who saw play in the first quarter, seven got a shot. The Buckeyes went 56% off the floor in the opening quarter.

A lot of that went into the second quarter as well, but in honor of McNeese State, they fought. The Cowgirls had 15 points in the second quarter thanks to a big eight minutes from sophomore guard Kaili Chamberlin. The Oregon native scored a ground-high 10 points and hit both of her three-pointers.

Guard Madison Greene earned one of her two steals of the quarter and guard Taylor Mikesell turned around as she started her quick break. As Greene won the ball on the ground, Mikesell saw the situation and started laughing as Greene threw the basketball onto the court for two of the Buckeyes, 26 points down.

With 1:52 left, striker Eboni Walker, playing a season-high 10 minutes in the first half, received a nice pass from substitute Hevynne Bristow. Bristow looked at a defender, then sent a no-look bounce pass behind an attacking walker.

Head Coach Kevin McGuff’s team went into the dressing room with a 60-23 lead, and the win was comfortably in their pocket.

From the second half it became more of a competitive game, not based on the total score, but only on the isolation of the third quarter. The Cowgirls continued to shoot strong from three, with Chamberlin and Autumn Watts each draining from deep. The game also got a little contentious and snappy during an MSU possession in the third quarter.

Ohio State forward Rebeka Mikulášiková went for the ball against McNeese’s Watts, and what initially looked like a jump ball ended up being a foul on the Buckeyes. After the final whistle, with the Buckeyes now 40 points ahead, Watts continued to hold the ball and Mikulášiková didn’t budge. It didn’t escalate further, but the tension felt by a McNeese State team that was struggling this season was very evident.

With three minutes left in the third quarter, the Buckeyes only surpassed the visitors 11-8. McNeese continued to play from behind and didn’t surpass Ohio State in the third, but entering the fourth quarter found the three balls worked against Scarlet & Gray. McGuff’s team failed to finish the final shooter, resulting in the Cowgirls going 7-on-15 in the fourth quarter.

In the fourth, Ohio State started to kill the clock and make the most of the 29-second throw clock, but on the cusp of 100 points, they still had their eyes on making shots. With 4:32 in the game, the Buckeyes had dwarfed 90 points.

With a minute and a half left, it looked like Ohio State wouldn’t hit triple figures, but a local high school state champion, freshman Perry, picked up her first NCAA points and brought the game a little closer. Like Henderson against the Ohio University Bobcats, Perry grabbed a steal in mid court and ran to the line in a layup with a trip. Perry missed the free throw.

Next it was Bristow, who took her to 98 with a hard-fought layup, in addition to a game with seven rebounds. Bristow hit a subsequent free throw, but Ohio State failed to score another, winning 99-43.

For almost every competitive game there is a reason to play. It was clear early on that Sunday’s game had none, at least on the surface. The Buckeyes were the far stronger team and immediately caused problems for McNeese.

Ohio State’s win was twofold. Staying healthy is first and foremost, and the horse chestnuts came out almost entirely unscathed. Many of the turnovers generated by the Buckeyes were accompanied by brawls on the floor for the ball, with McNeese players falling and colliding with Ohio State players.

At the end of the third game, backup guard Emma Shumate suffered the worst clash and needed help getting off the pitch. The Newark, Ohio guard left the game emotionally, holding her back and not returning to the game.

The second built on depth.

Strengthening of the squad

Forward Eboni Walker played a season-high within minutes Sunday after transferring from Syracuse University in the summer and returning to college basketball after suffering a season-ending injury. She would finish with seven points, six rebounds and four assists.

Also, backup guards Kaia Henderson, Kaitlyn Costner and Mya Perry each logged their most minutes of the season, albeit mostly in the fourth quarter when the game was furthest away.

The Scarlet & Gray have one game left before the Thanksgiving holiday on Thursday. On Wednesday, Wright State University of Dayton, Ohio, is taking a quick trip to Columbus for a 3:00 p.m. tip you can watch exclusively on BTN+.