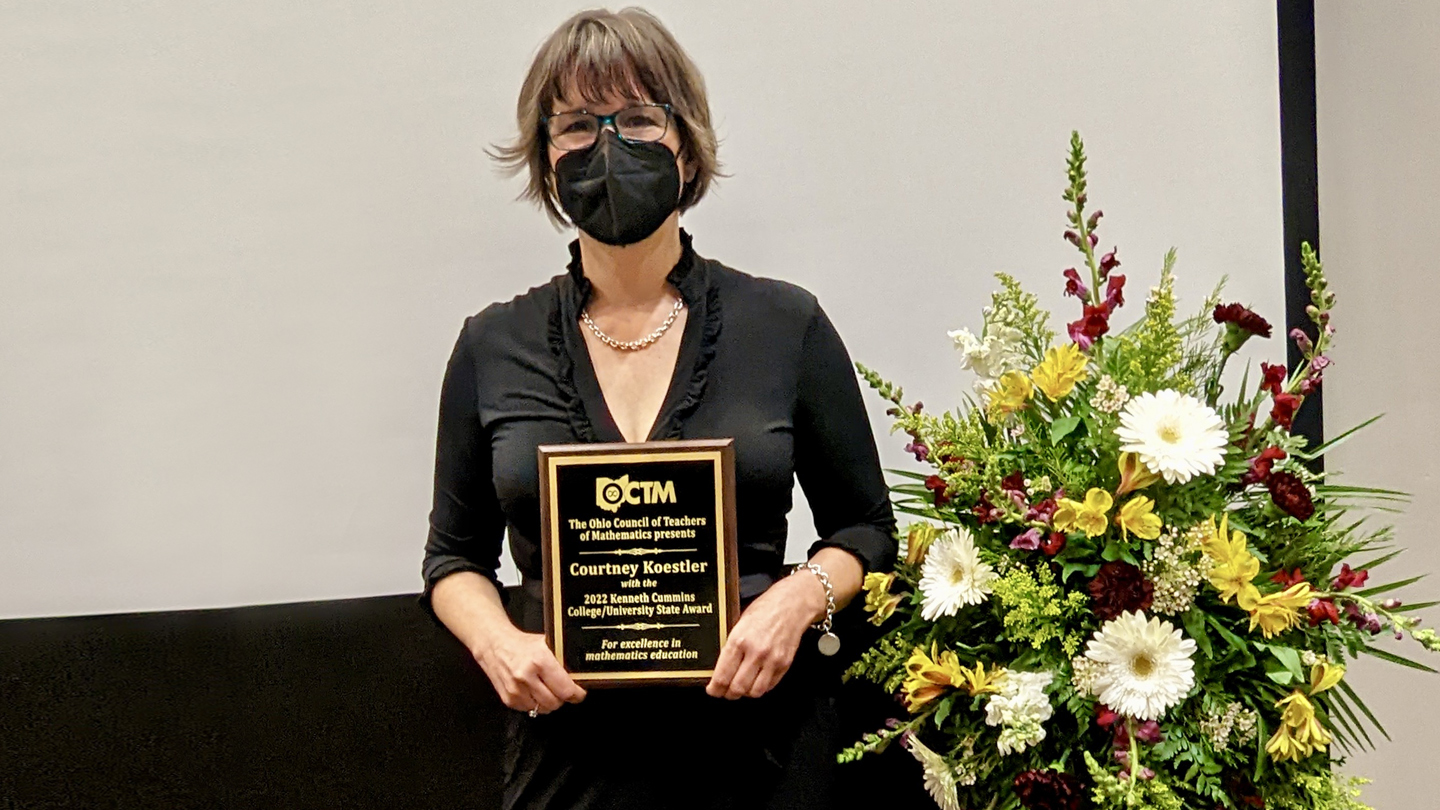 Koestler, director of the OHIO Center for Equity in Mathematics and Science (OCEMS) at Patton College and Associate Professor of Instruction, received the Kenneth Cummins Award. This award is presented to a college teacher for exemplary mathematics teaching and/or mathematics education in the state of Ohio.

“I am very honored to have been selected by the Ohio Council of Teachers of Mathematics for this award, and I appreciate my colleagues who nominated me,” said Koestler.

As a student, Koestler was originally interested in a career as an actuary (professional mathematician) until a professor recommended they consider teaching as a possible career path.

“A math professor suggested that I consider taking math classes because I’m such a social person and I enjoy teaching math to others. He encouraged me to study mathematical methods at the University of Education,” said Köstler. “I was excited and amazed by the mathematical understanding that teachers need to be able to teach math well. That put me on the path to becoming a teacher.”

For seven years, Koestler taught in the classroom and served as a math coach in culturally, linguistically, and economically diverse communities. These experiences shaped her personal philosophy of teaching.

“I believe that as teachers we need to recognize that everyone is ‘a math person’ so we need to seek out the unique knowledge and experiences that they bring to the classroom and connect with that and build on that to connect with the learn to produce content that we want to convey to them. This assets-based approach, which focuses on people’s strengths and the forms of knowledge they bring to the classroom, is an effective way to support the learning and growth of all students,” said Koestler.

Since moving to Ohio in 2014, Koestler has served the Ohio Council of Teachers of Mathematics (OCTM), serving as a board member since 2015, director of the council’s Southeast District, and most recently as the organization’s vice president. They have also made several efforts to increase their focus on equity and diversity issues and are currently a member of the OCTM Working Group on Diversity, Equity and Inclusion.

The second Patton College faculty member to receive an award was Foley, who serves as the Robert L. Morton Professor of Mathematics Education. Foley received the Christofferson-Fawcett Award from the Ohio Council of Teachers of Mathematics for his lifelong contribution to mathematics education.

“This is a special honor because I have great respect for the previous recipients, with whom I have often worked closely and who were (or are) my mentors. The list includes past presidents of the National Council of Teachers of Mathematics and two former Morton Professors, Len Pikaart and Jim Schultz,” Foley said.

The Christofferson Fawcett Prize is awarded annually to a member of the Ohio Council of Teachers of Mathematics for lifetime contribution to mathematics education. The recipient is recognized for outstanding and inspiring professional contributions to the mathematics community.

“I believe that students learn math by engaging in interesting and challenging problems that help them understand ideas in their own heads. Math teaching is about asking the right questions at exactly the right time,” Foley said.

It’s the same student-centric approach that Foley sees becoming the norm in the future.

“School and university mathematics is slowly but surely moving towards an inquiry-based, student-centred approach. The intent of my work is to support such an approach to mathematics teaching and learning,” Foley explained.

In June 2023, Foley will meet with other previous honorees to unanimously select the next Christofferson Fawcett honoree.