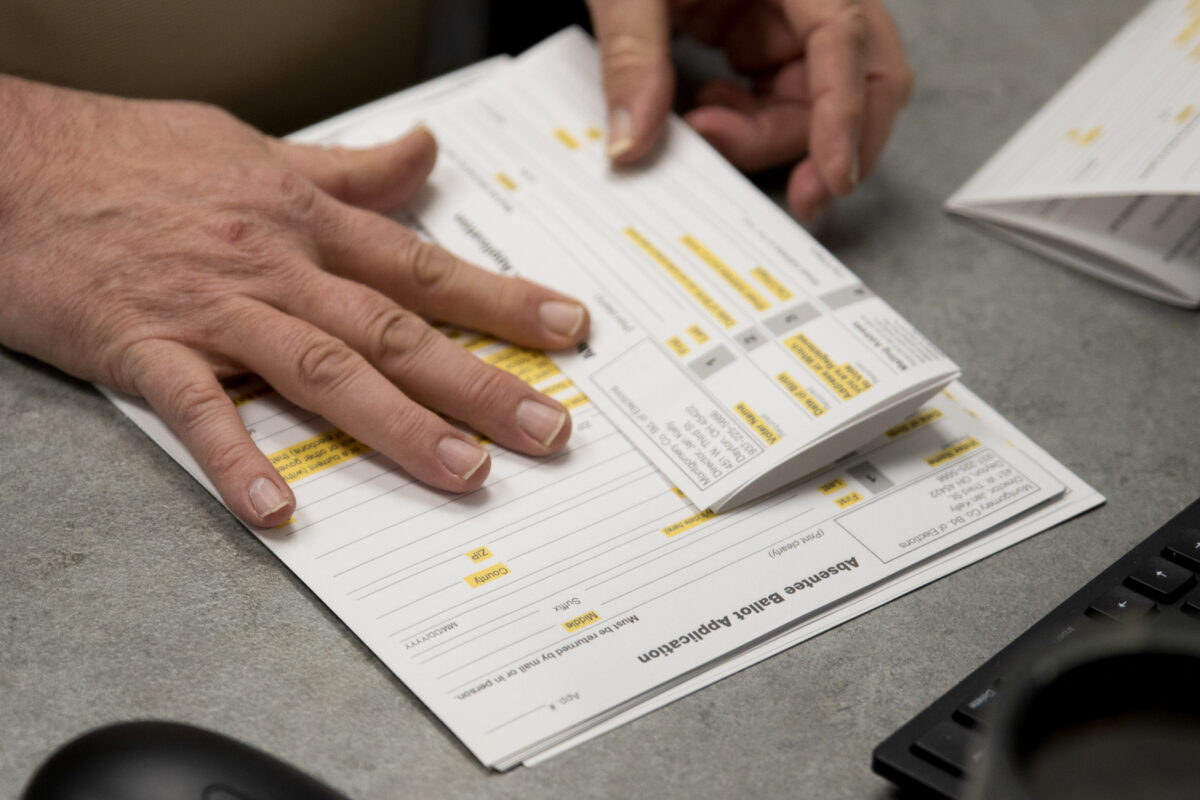 A proposed revision of Ohio’s election law introduced last year has resurfaced with changes that would bar the Ohio secretary of state and local governments from sending out unsolicited ballot applications and eliminate early voting on the Monday before Election Day, among other things.

On November 17, a government oversight committee of the Ohio House approved revisions to House Bill 294.

Known as the Ohio Election Security and Modernization Act, the law, when introduced in 2021, met with fierce opposition from Democrats and groups focused on expanding voting access.

Democrats were so troubled by the language of the bill that they held a series of town halls to express their disapproval.

Jen Miller, chief executive of the League of Women Voters, testified against HB 294 on Nov. 17.

“We are of course supporting some provisions, funding for more e-election books, establishing online absentee ballots, and calling for standards for print providers,” Miller told committee members. “The bottom line, however, is that the bill would make elections unnecessarily complicated, expensive and inefficient for election officials and voters alike.”

Bill Seitz, leader of the majority level of the House of Representatives, who is a co-sponsor of the bill, said in testimony, “This bill represents months — and in some cases years — of work as we continually seek to modernize our electoral laws to make it simpler make voting and harder to cheat.”

Postal votes are an integral part of the measure.

Since 2012, Secretary of State Frank LaRose’s office has mailed a ballot-by-mail application to every voter in Ohio before even-numbered elections.

From funds approved by the General Assembly, the Office of the Secretary of State prepaid return postage at the last election.

If passed, the new version of HB 294 would end this practice. Instead, voters would apply for a postal ballot online, by phone, or by printing out the form and mailing it to the county board of elections.

“Sending mail-in ballots to every registered voter could also be used to verify the accuracy of voter rolls,” Miller said. “The forms returned as undeliverable could then be flagged and further examined to determine whether those voters have died or have relocated.”

Seitz said: “There is no need to send a letter to all registered voters asking them to apply on paper.”

“Nevertheless, if the Senate is willing, I am ready to restore the current legal rule that allows the Secretary of State to send out these mailings if the General Assembly approves on a case-by-case basis,” added Seitz.

The new version of the bill would reduce the time mail-in ballots can reach the Election Committee from 10 days after the election to seven days.

Under the current format, it is difficult for election officials to accommodate voters who are waiting until the last day to apply for a mail ballot, Aaron Ockerman, executive director of the Ohio Association of Election Officials, told a Columbus TV station.

“Even if there’s no mail on Sundays, somehow all these ballots have to get to voters on Monday — that just doesn’t happen,” Ockerman said. “If you request your ballot on Saturday, we process it and it breaks our hearts. There is no way a voter gets a ballot paper by Monday.”

The revised measure would also eliminate automatic voter registration by the Bureau of Motor Vehicles, increase ballot box security rules, ban most August special elections, and allow no more than three dropboxes outside of a county’s Electoral Board from the end of voter registration until the close of voting on Election Day .

HB 294 clarifies that Ohio voters can use electronic and paper copies of utility bills, bank statements, paychecks, or government-issued checks to confirm their identity.

Photo ID is not dealt with in HB 294. This issue was presented in Senate Bill 320, which would require Ohioans to show photo ID before voting.

The proposed legislation, introduced last year and awaiting a vote, would mandate the BMV to issue free state ID cards to Ohioans ages 17 and older.

If SB 320 is legally signed, bank statements, utility bills and other acceptable forms of identification would no longer be permitted under current state law, the statute explains.

Seitz told Cleveland.com that some of the adjustments in the revised legislation were made in response to Democrat concerns about the original version. Further changes were incorporated after “many negotiations” with the GOP-controlled Senate, Seitz added.

Jeff Louderback is a national reporter for The Epoch Times, based in Ohio, covering the US Senate, US House of Representatives and governor races in Ohio and surrounding states.