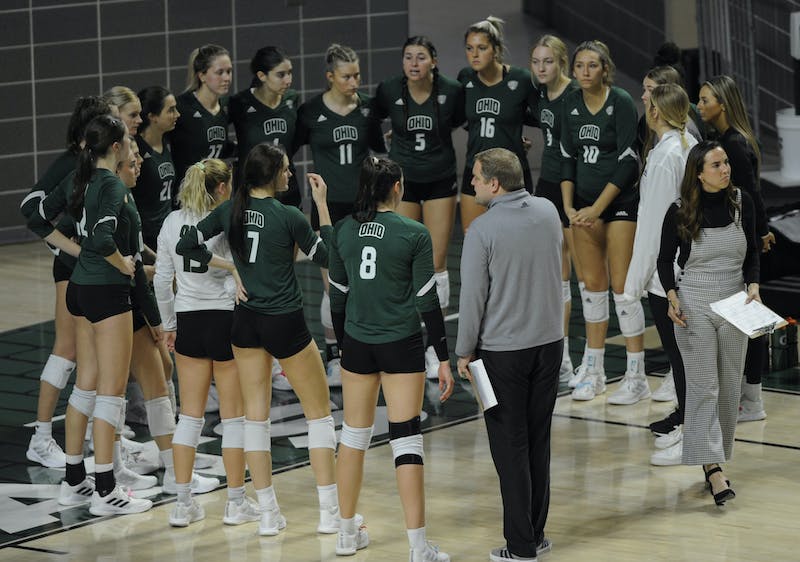 Because of the depth of the MAC, the Bobcats knew they were going to take on a difficult opponent in the first round, and the Bulls proved they were up to the task in the first set.

The Bobcats let the Bulls play from behind again in the second set, and this time they had an 18-12 lead. Although the Bulls struggled to reduce the Bobcat lead to two, Caroline Clippard had a kill that ended the Bulls’ hopes in the second set and the match was level.

In the decisive third set neither team could start a goal run, the lead went back and forth. In the middle of the fourth set, the Bulls took a one-point lead with a 4-0 goal run. The set stayed tight, but Kristy Frank had a key kill to give the Bobcats a 21-19 lead late in the third set. Just as the Bobcats looked close to victory, they made an attacking error and allowed an ace of serve from the Bulls to level the set. Frank had two more kills to tie the set, but the Bulls again played at crunch time and won the set by two.

The Bulls had no intention of letting the match go into a fifth set, scoring seven of the first 11 points of the fourth set. The Bulls maintained their three-point lead after a Courtney Okwara kill made it 14-11. Clippard had a kill to draw the Bobcats to two, but the Bulls would go on to score four straight points to end the Bobcats’ hopes of the match. The Bobcats were able to extend after a 5-2 goal run, but Okwara officially ended the Bobcats’ season with a match-winning kill.

Frank saved one of her best performances as a bobcat for her last match. She had the most kills of any player in the match at 18. Caitlin O’Farrell was the only other Bobcat to finish with more than 10 kills, she had 14. Anna Kharchynska set a new career high with a total of 6 blocks. Olivia Margolies and Sam Steele both led the team with 14 digs.